This episode evolved following a formal complaint by the Ukrainian government of Petro Poroshenko lodged a formal and detailed complaint with the Sri Lanka Ministry of Foreign Affairs, the news story said. The accusation mainly deals with the sale of assault rifles and other small arms. Though both Foreign Minister Mangala Samaraweera and his deputy Ajith Perera made confirming comments on this complaint, local language media did not pick up the story at its desired levels.

If these allegations are true and correct, the highest ranked Sri Lankan diplomat in one of the key capitals (one of the five Security Council member countries) in the world has violated all accepted norms of diplomacy and international relations.

Udayanga Weeratunga who is the nephew of former President Mahinda Rajapaksa had been resident of Ukranian capital Kiev running his own business “Club Lanka” until he was appointed to the highest rank at our Embassy in Moscow soon after President Rajapaksa assumed office ten years ago. According to his own Facebook page in which he is still the Sri Lankan Ambassador in Moscow, Weeratunga has studied at National Technical University of Ukraine, Kiev and graduated in 1991. 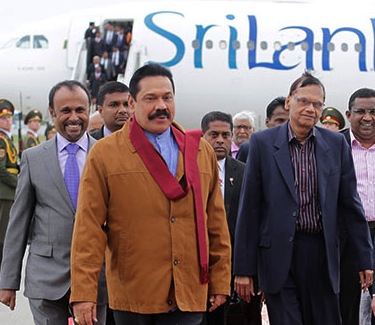 This unacceptable and highly embarrassing conduct of a top diplomat raises many questions (for which answers are pretty obvious I suppose) and challenges to the present government of Sri Lanka.

Weeratunga was among the dozens of kith and kin who extensively benefited with lavish diplomatic postings in capitals all over the world with or without necessary qualifications; mostly without. On many occasions the only qualification was being a member of a powerful family tree or connected otherwise to the top. These appointments not only included top diplomatic posts, but second and third tiers of embassies, as well as non-diplomatic postings. If I am not mistaken several embassies ran without a single career diplomat within the mission office which could lead into highly vulnerable situations on protocol and consular fronts.

Of course, the blame of appointing such substandard individuals to high diplomatic positions could be directed at the political leadership of the day, but at least there is one barrier that such appointments have to face – if at all it could considered a barrier. These appointments have to be approved by the Parliamentary High Post Committee and it would be interesting to go through the reports of such meetings where these individuals were whetted and scrutinised. I do remember the career diplomats’ collective body raising their concerns over substandard appointments at several occasions but those fell on deaf ears. These crucial appointments were made totally neglecting the country priorities of the day – at a time when Sri Lanka was militarily confronting the most ruthless terror organisation in the world. Harsh military responses demanded tough political battles on diplomatic grounds in every single capital wherever we were present through our missions. But what happened in reality was entirely the opposite. Many political appointees were enjoying perks, some were engaging in their own businesses,some were educating their children in popular universities, some were on ‘medical postings’, some were dealing with state resources to make commercial benefits – all at the expense of the public. There was another fascinating part to this entire episode. The government outsourced most of the functions of our embassies to high-flying international private agencies through multimillion dollar deals resulting in a double waste of public funds.

Personnel in missions abroad should not be confined to career diplomatic officers. The embassies should be multi-faceted, multi- skilled one-stop shops representing Sri Lanka. There are many non-career diplomats who had excelled and became iconic figures within the country’s Foreign Service; the list could span from Prof. Gunapala Malalasekera to Rosy Senanayake.

Realising the importance of bringing private and corporate sector skills into the country’s diplomatic sphere, former foreign minister Lakshman Kadirgamar institutionalised a mechanism where many professionals from different sectors joined the Foreign Service. But that process at times faced several challenges including a few legal battles – but this does not mean that these could not be repeated or that the challenges could not be mitigated and the system restructured with a new dynamism.

The challenges of the day in foreign relations are multi-faceted ones that predominantly include damage control measures as well. There is a clear paradigm shift in the country’s foreign policy following the Jan 8 developments in the country and those were clearly visible during the past three months. The Geneva achievement, to my mind, is a temporary gain but bigger battles are ahead.

Although past political appointees were quick fixes filling those vacancies with necessary skills and capacities is the challenge. Foreign Service professionals alone could not fill this vacuum in meeting the present day challenges of Sri Lanka in our missions abroad.

The world of diplomacy is now slowly transforming from political diplomacy to economic diplomacy. Several European countries are already taking rigorous measures along this path. One Scandinavian ambassador in an East Asian capital briefed me last week on how their embassies are now converting into service providers to their own home-based businesses.“This has become more than seventy per cent of our work and we are not doing this as a mere service. This is a service for money. The embassy charges lucrative amounts from these home-based businesses to provide the services on an hourly rate basis that goes up to even USD 150 per hour,” the ambassador said..

“So we are now busy in several fronts – attracting necessary local knowledge and skills to the mission to provide these services, developing business plans and revenue models, I am trying to be skillful on these strange subjects myself. We used to enjoy golf and colourful evenings, but not anymore,” he said.

Thus, the political engagements and focus is now dominated with economic focus at these embassies.They are supposed to be one-stop shops for business opportunity seekers, PR exercises on public diplomacy but without totally neglecting the importance of political and consular engagements.

These trends could be too early for Sri Lanka, but could provide some food for thought in prioritising our challenges and opportunities in diplomatic fronts. The embassies which predominantly were retirement destinations, personal business ventures and places for personal achievements for kith and kin and other henchmen (sometimes for retired foreign service personnel as well) for a period over a decade need a serious clean up and revamping effort.

At the end of the day it is all about value for money. Millions of dollars of public funds are being spent monthly to maintain 50 odd Sri Lankan foreign missions all over the world. Thus, we need a strict monitoring and evaluation mechanism on these embassies to get the best value for public money.

Professionalism is the buzzword in this whole game.