“…. A world where black magic ruled and dark spirits and planets swayed the lives of men and women.”

Readers, it will excite you to try and read this picture of Mahinda Rajapaksa. Try to gauge the character and mindset of the man who ruled Sri Lanka like a dictator for ten years and is now demanding more ruling time.

Any of you noticed a most valuable piece written on MR’s character by Melbourne’s psychiatrist, Dr Prasad Mohotti, and published in the Colombo Telegraph? If you missed it go to archives and stretch it out. I will borrow some of Prasad’s ideas in getting this article together.

Dr Prasad states that MR suffers from a narcissistic personality disorder.Narcissism means love for oneself and the word originated from the myth about Narcissus getting drowned by contemplation and admiring the reflection of his image in the pool. MR was thrilled to bits so much when the “Maharajaneni,” song was composed and sung in his presence that he gifted the composer and singer. A road was named after the singer. MR was similarly thrilled when the popular actor, Jackson Anthony, announced the results of his personal historical research, namely that Mahinda Rajapaksa hails from a long line to which the Buddha belonged! They say Jackson was amply rewarded.

Being my good pal, I hope he was. 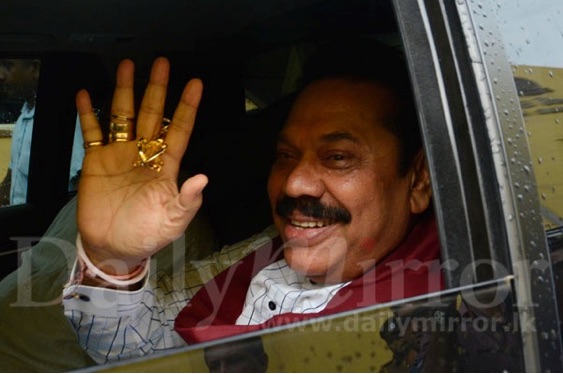 Asks Dr Prasad, “Why does a narcissist put up a grandeur façade? The psychological explanation is that a grandeur façade is an unconscious mechanism to cover his weak and fragile ego. A person with a weak ego has limited capacity to reflect on him or herself. Their grandeur self-image would not allow them to be self-critical and learn from their mistakes, because such action is unbearable to a fragile ego.”

A more humble man, conscious of his human foibles and limitations and ready to share his achievements with others in the team, would recoil at suggestions like this or metaphorically gone six feet under the earth when they were uttered. In the case of our hero-that was not to be. The hero, as Prasad says, managed to convince the population that it was himself who singlehandedly fought and won the war. Lankan media gave the impression that the war had been virtually fought without an army commander. The public swaying had been so great that when MR dragged and jailed the army commander, Sarath Fonseka, and grabbed his hard-won titles for career bravery there was little and short-lived opposition. The few that waded their way toward the jail in protest were hammered with iron bars and sticks

Dr Prasad cites the Diagnostic Manuel of American Psychiatric Association (DMAPA) and identifies five criteria of narcissistic disorder. A fantasy of grandeur is one. The picture under reference shows MR looking proud with the many gold rings in his fingers. They are shining gold that exudes richness and grandeur.

The demand for excessive admiration is another criteria. MR shows his gold rings as though he wants us to be dumbstruck and admire him for the suggestion of prowess that the rings emanate.

A sense of self-entitlement is another of the DMAPA criteria list. MR displays his gold as though he is entitled to the gold and requiring others to acknowledge that possession. It is the same sense of entitlement that made him organize the ‘bring-back’ rallies and also go before his successor asking for PM candidature. Maitri is wise to disallow that because if MR wins and if he becomes PM his narcissism will lead him to browbeat and overwhelm the humble Maitri. Men imbued with excessive and paranoid narcissism are dangerous team mates.

Take a closer look at the MR image. To me MR looks weirdly mentally possessed here. Another dimension, unmentioned by Dr Prasad, can be read in the MR picture. This is the invasion of his psyche with a belief in the occult or in an extra-terrestrial spirit which he thinks can make him draw anyone under his spell. It is the confidence he has in the power of black magic. MR’s narcissism is thus a black magic- tainted narcissism. Note the weird-shaped, paranormal-looking ring between the forefinger and middle finger. The story is that MR had spent millions to get that mesmerizing device made up by a Hindu black magic man. Was it at state expense? Or off the Divineguma funds? Did you also note the thick orange-coloured ‘pirith nool’ just inside his cuff? MR wanted all the black magic protection he could get.

This particular dimension of character that is brought out by the picture reveals MR’s worldview. Although a man of the raw earth driven by material desires, MR inhabited a universe where dark spirits ruled and planets swayed the lives of men and women.

He does not believe in a universe entirely operated by natural causes and effects. This is why he listened to his astrologer, Sumane, and launched the Presidential elections.

The point is, once such bizarre beliefs infect your mind they don’t leave you, even if events contradict them. It is very similar to religious beliefs about God and divine salvation. You tend to find a way out to explain an ‘exception.’ Hence, MR will continue to believe in the dark arts. His politics is a chess game with the devil.

The world of David Cameron and the world of Mahinda Rajapaksa are poles apart. Our man has crap in his head.