President, Maithreepala Sirisena says that the objective of any public representative should be to work for the wellbeing of the people despite differences in their political affiliations or ideologies.

Speaking at a workshop held at the BMICH on Monday to enlighten the relevant public officials on enhancing the development programme on the provincial and national level, with proper coordination, the President said it is also imperative to act in agreement in discharging public services.
Officials of provincial and local governments attended the Workshop on Improving Development Processes with Better Coordination at National and Provincial levels held at the BMICH today. The workshop was organized by the Presidential Secretariat and the Finance Commission. 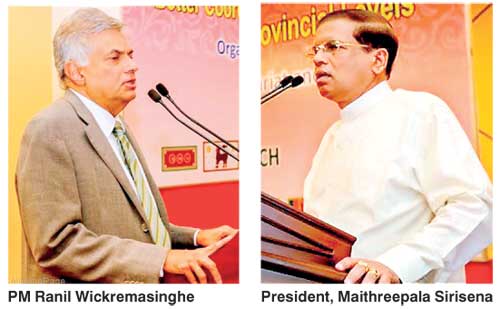 Addressing the attendees including the chief ministers of the provinces, the President noted that the time has come to evaluate on the qualitative aspect of the provincial council system, which has been functioning throughout the country for the past 28 years.

The President further said that the provincial councils should focus on the efficiency and plan implementation process but most of the times PCs are concerned on the restrictions of their authority. What needs to be done, however, is that the PCs should focus attention on the provision of a productive public service through the optimum utilization of their powers.

He said that steps must be taken to eradicate wastage and corruption whenever the provincial councils and the parliament use public money for programs. Prime Minister Ranil Wickremasinghe said at this occasion that the conference has been organized according to a concept of the President. He has also pointed out the need to effectively utilize the necessary resources for the development programs initiated through the provincial councils.

The discussions were also centered on the responsibilities entrusted upon the provincial councils in the development of the committees setup under the leadership of provincial governors and provincial chief ministers. Ministers Karu Jayasuriya, Ravi Karunanayake, Rajitha Senaratne, Akila Viraj Kariyawasam, Governors and Chief Ministers of the nine provinces and government officials participated in the workshop.

Back President Sirisena, who holds key to future good governance The opposition political rally held by supporters of former President Mahinda Rajapaksa last week in Matara is being described as the largest such rally so far. Over 75 opposition parliamentarians amounting to one third of the numbers in Parliament attended the event. The SLFP contingent amongst them, who constitute the vast majority, attended the rally in defiance of the decision taken by the SLFP hierarchy including President Sirisena that no member of the SLFP should take part in a campaign to bring back the former President as the party’s Prime Ministerial candidate at forthcoming general elections. Time and again President Sirisena has declared his unwillingness to permit such a comeback. But he has been unable to prevent his party members from attending the rallies that are being held primarily to support such a comeback.