Minister of Food Security Gamini Jayawickrama Perera this week said that widespread abuse of State resources by Mahinda Rajapaksa during his tenure as the President is still under probe and recent political statements of the latter are just to hoodwink the masses. 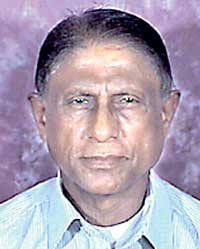 “Investigations are proceeding on allegations of fraud and corruption against him and his henchman.  Therefore, it becomes a joke when he makes payment for the use of his official vehicle and boasts of it. It is a political fraud.  However, we can be happy of the fact that Kurunegala District candidate Mahinda Rajapaksa has now accepted the need to follow examples set by Prime Minister Ranil Wickremesinghe,” Perera said.

Following is the full text of his statement:

Good governance today has become the aspiration of everybody in this country. Even Mahinda Rajapaksa, the candidate vying for a Parliamentary seat, is justifying the need for establishing it. It is heartening to note that Mahinda Rajapaksa is following the example set by Prime Minister Ranil Wickremesinghe in this regard. He has made a payment for the use of his official vehicles. Despite Mahinda Rajapaksa making statements against Ranil Wickremesinghe, his guidelines have been accepted by Rajapaksa. It is a victory for the Prime Minister who is committed to establishing good governance and enjoys a reputation for doing the correct thing and acting as an exemplary leader.

What were the examples which we witnessed in the recent past? The dansalas (offering free meals) given away by Mahinda Rajapaksa using public funds at the Temple Trees which was followed up in similar fashion on a larger scale at luxurious presidential palaces in several areas covering the length and breadth of the country.  Millions of public funds had been siphoned off from State institutions for election propaganda in the form of distributing sil redi (clothes for Buddhists to observe sil, a religious ritual), wrist watches and clocks, roofing sheets, sarees, milk food and other food items, thus running those State institutions to bankruptcy.

Why is that the so-called Good Samaritan Mahinda Rajapaksa does not organise dansalas now? Kurunegala District UPFA loyalists who expected to treat themselves with luxury meals from dansalas and receive gifts are disappointed because Mahinda Rajapaksa who used the public Treasury as that of his own cannot use public funds any more for his election gimmicks as he did in the past. The only treat Mahinda Rajapaksa gives people nowadays is treating the people with blows and fisticuffs. However, we would like to remind him that his thuggery exercised in his village is not admissible in the Sath Koralaya. It is now revealed that he and his family members had used helicopters free of charge to travel even a short distance. His sons used helicopters for round-trip journeys to Nuwara Eliya for horse-riding exercises and Shiranthi Rajapaksa used a helicopter even to go to Maharagama. No payments had been done for any of these helicopter rides. Such facilities are afforded only to the President and the Prime Minister but Rajapaksa’s kith and kin abused this facility considering public property as their own.

It was during Mahinda Rajapaksa’s era that the abuse of State resources reached its peak and the money spent were the highest ever, making it a record. An amount of Rs. 142 million is due to the Sri Lanka Transport Board which finds unable to pay the employees their bonus, EPF and ETF.
Several millions of rupees have to be paid to the State-owned Rupavahini Corporation for advertisements telecast to boost Rajapaksa’s campaign during the presidential election. The telecasting rights of cricket matches were given to his son’s television channel, depriving a huge amount of millions that should have gone to the coffers of the State television channel.

Rajapaksa used Temple Trees, his office complex and all its office equipment for his presidential election campaign. Therefore, when he criticises the use of public resources, it is an insult to the intelligence of the people of the country.

Investigations are proceeding on allegations of fraud and corruption against him and his henchman.  Therefore, it becomes a joke when he makes payment for the use of his official vehicle and boasts of it. It is a political fraud. However, we can be happy of the fact that Kurunegala District candidate Mahinda Rajapaksa has now accepted the need to follow examples set by Ranil Wickremesinghe.