“The fate of Premini was terrible. The dusky woman with attractive features was taken to another camp and raped first by Sinthujan himself. Thereafter it was a horrible gang rape with TMVP cadres taking turns to sexually assault her. Fourteen cadres raped the poor girl. Premini was heard to shout and cry at the start. Later she merely sobbed and whimpered. Premini was taken out before dawn by TMVP cadres to the jungles. She walked without crying or showing signs of emotion said one ex – TMVP cadre. She was apparently hacked to death and thrown into the bushes.” – First Anniversary: The tragic fate of TRO employees abducted by Karuna cadres, by D.B.S. Jeyaraj, 4 February 2007.[i] I know a mother whose son went missing. She is from Neerveli, Jaffna. The pain is gruesome. It is not something like your loved one getting killed, where you have no choice but to accept the reality and come over the grief and move on. But having someone from your family missing (enforced) is terrible. It just leaves you some questions. First whether your loved one is alive or not? If alive, where is he/she? Is he/she being treated well or being tortured? To whom you should complain to get him/her back? In an enforced disappearance, it is not only the victim who suffer, but also the entire family.

The mother I met was struggling with the uncertain reality. She still believes that her son should be alive somewhere in this country as the dozens of astrologers she had sought advice told her that her son is still alive somewhere in the southward direction from her home. That’s the only hope she has got and that’s the only thing which still drives her in her search for the missing son. Every time the phone rings, she said, she hopes it is from her son or someone who knows about her son’s fate. It is over five years since her son went missing. There are thousands of mothers like her in our country.

An interesting fact in all or most of the enforced disappearances is that the victims’ relatives know who the captors were.

They can identify whether it is the police or the military or the Karuna Group or the EPDP or theLTTE. And most of the times, they know which camp the captors came from, sometimes they know the individuals involved in the enforced disappearances.

However, so far not a single suspect of enforced disappearance was brought to book, needless to say about how many were punished by the court of law. So many mothers have openly complained to the LLRC and the president’s Commission investigating the enforced disappearances that their sons were abducted by Karuna Group.[ii] 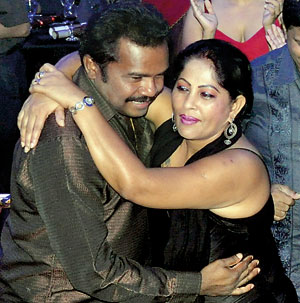 Well! Leave the security forces of this country. They are above the law and can never be punished for their crimes.

But why the legal system of this country could not take any action against the paramilitaries for their crimes against Sri Lankan citizens and the humanity as a whole? Is it because these murderers did not leave any trace of their barbaric acts? In fact, most of the abductions by Karuna Group were done in broad daylight, in public places. In an instant, they stopped a bus and pulled out their victim and assaulted his mother who tried to save her son. [iii]

So, is it because these criminals are on the run and have hidden somewhere? No. They live right here, right in front of us, with their families. Not only that, they laugh, they dance and appear on TV shows and speak about how they helped to win the war and eradicate terrorism in this country, and of course, despite the number of abductions, murders, rapes, and extortions they have done they are called ‘Honourable’.

In November 2013 (for the CHOGM), Mr. Rauff Hakeem made a comment to the press about Karuna which is as follows;

‘Karuna’s presence here is symbolic, for it provides some idea about the LTTE fighting cadres’ willingness to embrace peace’[iv]

It was very strange that Hakeem, who was the then Minister of Justice had forgotten that it was after 2004 March, in other words it was after embracing the so called peace, and Karuna Amman went berserk in the government controlled areas. 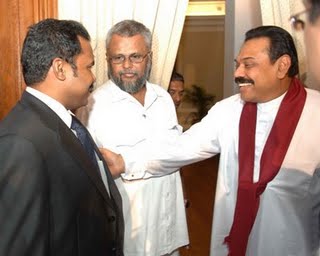 Mahendra Percy Rajapaksa Regime was marketing Karuna Amman’s collaboration with the then government as a transformation of a terrorist into democracy. It tried to portray Karuna Amman as someone like the General ‘Butt Naked’ of Liberia, a cannibal warlord who turned into an evangelist[v]. Of course, I am not a professional political analyst. Yet my humble mind says that Karuna Amman and General ‘Butt Naked’ cannot be compared except their atrocities committed against humanity. It also should be noted that the General ‘Butt Naked’ openly accepts what he had done during the Liberian Civil War, including cannibalism and expressed his willingness to be tried by ICJ.

What about Karuna Amman?

When Deputy Minister Sujeewa Sensingne criticised, this warlord simply pounced back by talking about how the Premadasa regime gave weapons to LTTE and told he would expose more secrets if UNP continue to criticise him. [vi]

What makes it interesting is Karuna Amman’s relationship with his masters, till the time he split withPrabhakaran, he was the second-in command in LTTE and enjoyed a ‘near’ autonomy in controlling the eastern province.

Once he split up with LTTE and joined the Rajapaksa government, he went on a rampage of abductions, recruitment of child soldiers, extortions and murders. Rajapaksa government turned a blind eye and patronized him as it desperately needed Karuna Amman in its war against the LTTE.

He was even made a national list MP and then appointed as the deputy minister of integration in 2008. And he enjoys the same level of impunity in ‘Yahapalanaya’.

Only once in his life Karuna was challenged. That’s is none other than by Mr. Pillaiyan, his aide. The entire eastern province became bloody battle theatre when these warlords waged war against each other. This is when Sinthujan, the head of Karuna Amman’s Intelligence wing involved in the rape and murder of Premini was killed by Pillaiyan faction. Karuna was in LTTE assigned to eastern province during the Aranthalawa massacres and was the special commander in chief when the massacres of surrendered 600 police personnel, and the massacres took place in Kattankudi mosque, Eravur, Samanthurai, Palliyagodella, & Gonagalla took place. All these couldn’t have happened without his complicity. Yet, no Sinhala or Muslim political leader has raised any concern about Karuna’s involvement and sought justice for the victims. It seems they have simply forgiven him for their own political survival and was quite content working with him for the national integration. Leave alone, the Sinhala political leaders, to whom Karuna has done a great favour of weakening LTTE and Prabhakaran, the Muslim leaders didn’t bother to question Amman about his bad deeds or even about his rampage of extortion from Muslim businessmen.

I am just an ordinary citizen with a very ordinary level of education. For me, this country, this society, the social values and above all, the legal system seems to be quite confusing. For example, the police is quite fast to arrest the masseurs working in spas (?), for prostitution, but they don’t bother about a warlord who went on a killing spree, abductions and extortions. In fact, they protect him and call him ‘Sir’.

In this country, one cannot imagine about bringing the security forces under the law for their atrocities against the minorities since they are called war heroes and enjoy an elevated position of ‘semi-god’ given by the majority Sinhalese people, and their atrocities are somewhat justified as a necessary measure in the fight against the LTTE.

In the past, Karuna Amman has unleashed his brutality not only against the Tamils & the Muslims but also against the majority Sinhalese. Yet the Sinhala political leadership is afraid to take any action against him. Why? Is it because taking legal action would create a chain reaction, which would lead to all the information about the past atrocities of the state exposed? Thus if the security forces are ‘semi-gods’, Karuna Amman is above the god.

I believed this would change in ‘Yahapalanaya’. Now it is almost eight months since Maithripala Sirisenacame to power. Yet there is no change. Yahapalanaya has miserably failed even to initiate actions against those who committed crimes against the citizens of Sri Lanka. It just keeps on promising that it will deliver the promised justice.

My question is that we all know who did it. Then, why we all keep pretending that we don’t know anything and just convince ourselves saying investigations are going on.

Whom are we trying to fool?

How long are we going to call those who abducted, raped, and massacred the Sri Lankan citizens as ‘Honourable Sir’?

Hon. Karuna Amman – The One Even Above The God

The FCID has done its work – Culled from News gives this situation:

Corruption at its peak during MAHINDA’s Regime as summarized hereunder:

16. Sajin Vass Gunewardena in abuse of Public property & B.Com. re his Assets.

17. Petition accepted in Supreme Court on 6.8.15 re Vehicle Permits abuse