Prime Minister Ranil Wickremesinghe it seems is pushing for an expeditious replacement constitution. I suspect he is of the view that if there is moderate devolution to Tamil areas within six or twelve months, international and local demands for punishment of convicted (fat hopes if it’s a 100% domestic process) politicians and military brass can be defused. An accommodating President Sirisena will no doubt be glad to garland culprits with an amnesty. I can’t see even small punishments or a rap on the knuckles; that’s the power hegemonic politics. A domestic process sans international component will flop because Lanka has neither systems nor ethos to handle it. Realistically however I am reconciled to the inevitable as my preferences will make little impact.

Maybe President Sirisena can restrain his compassionate munificence! In Chile, military brass convicted of torture, murder and kidnap during Pinochet’s military regime are housed in the bucolic tranquillity of Punta Peco special detention centre, allowed 24-hour visits, provided with special meals and sports facilities, and permitted conjugal joys or call-girl facilities at taxpayer expense. Not bad eh? A Lakdev Liyanagama writing in the Daily News on 17 September says “. . President Sirisena and Prime Minister Wickremesinghe (should) assure Sri Lankans that those who prosecuted the war – especially in uniform – will not be victimised (sic!) by such an inquiry”. What he means is that perpetrators of crimes enumerated in the HRC Report should go scot free. Maybe a Punta Peco in the salubrious hills of Diyatalawa will do fine.

Allegations of widespread sexual abuse and torture before, after and during the war and some occurrences after 8 January 2015 will not come as a surprise to those familiar with the nature of state power and the incidence of deviants (vide Peradeniya rag) in our society and this backs Hilary Clinton’s assertion that the military employed rape as an instrument of war. The UNHRC Report opens up this can of worms and Lankan society needs to address several challenges.

To return to the political dimension, the UNHRC will impose time limits, though the domestic process, after pleadings for extension, is likely to drag on for – your guess is as good as mine – say 18 months.

And come, come, let’s be grown-ups, the birth pangs of the replacement constitution may be just as long. In the meantime for Rajapaksa’s main phalanx, and for the advance guard of four or five hard-core racial rabble-rousers, a constitution incorporating devolution, and the start of a process, whether domestic or international, seeking out war criminals is manna from heaven. Double-bubble toil and trouble, Ranil boil and MS squabble; feed the hate and stir the squalor, that’s the way to dope and lucre. To be prosaic, both constitution and war-crimes inquiry are protracted procedures; meanwhile rabble-rousers will enjoy prolonged felicitous circumstances and Tamil areas will rot under the military. 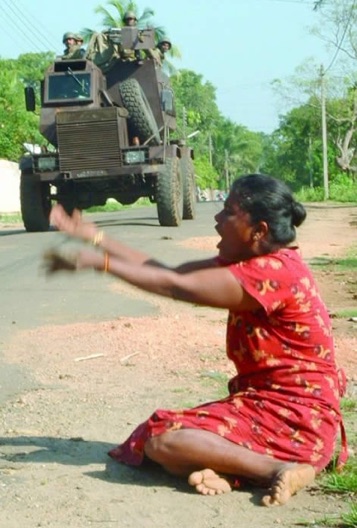 This Gordian-knot must be cut; people cannot wait 18 or whatever months; it must be action now on four concrete imperatives that justify no procrastination.

Ranil, even Sirisena and all politicos know that the hogwash is eyewash for the public but none of them has the guts to call a spade a spade. To repeat: Constitutions may come and go; devolution may or may not dawn; war-crimes inquiries may meander forever. Leave all this to one side. Demilitarise NOW; return occupied lands NOW. What’s the problem?

There are two more matters about which the government must get serious; economic cum social development and rehabilitation of displaced people. These are not one shot issues that can be done in a day, but the progress of this government is no more expeditious than the snail’s pace at which the previous one was ambling. The apathy, nay the intransigence of the Northern Provincial Council and its Chief Minister is contributory. Unfortunately this also calls in question the virtues devolution, but the Central Government has no option but to go over these dunces and take development in hand in direct liaison with N&E Members of Parliament. If devolution has flopped due to the incompetence of the NPC and its CM, just pass them by. Things are better in the East.

Snail’s pace rehabilitation was expected from the previous regime whose loathing of Tamils was visceral, but why progress has not been any better in the last nine months is not easy to fathom. Is the Ministry of Rehabilitation exclusively for decorative purposes? If unending militarisation of the North and reports of repression and sexual molestation is a problem, is it not time Minister Swaminathan spoke up? In sum, demilitarisation is the cornerstone for acceleration of land restitution, rehabilitation and economic development; start with it! Reconstructing the broken social order in once orderly Jaffna and restoring society’s moral norms is a long-term challenge about which there are more qualified people than I to hear from. I need to repeat the bottom line of my argument one more time.

Demilitarisation and restitution of military occupied land can be done by Ranil and Mirisena at the stroke of a pen if only they have guts to say boo to the chauvinist goose and to the military jack-boot.

Economic reconstruction and rehabilitation need not wait till the never-never day when constitutions are enacted and war-crimes probed. Ranil more than Sirisena is the source of power at this moment; the latter is only a useful screen when needed. So it is his not Sirisena’s mettle that is being put to the test at this time. Does he have what it takes to say “boo” to the chauvinist goose and the military jack-boot?

I used the expression ‘never-never day’ after some thought; a counterattack is being prepared by Rajapaksa-forces as there is no other short-term option for counterrevolution. It will also serves the purpose of disrupting corruption trials and muddling murder investigations making painful progress through the system. The UNHRC thunderbolt and devolution crumbs to the Tamils will be the perfect foil for a racist offensive beating rata-jathika drums and tucking up swastika adorned loincloths. Does this seem like a worst case scenario? Well remember Sod’s Law is truer than Murphy’s Law – and if you’ve forgotten, Sod’s Law statess: “Murphy was an optimist”.

If you have been following the unfolding saga, the opening salvos have been fired. The campaign is orchestrated around three slogans:

I am indeed quite taken aback that most people, including firebrands among my left friends are myopic to this growing peril. Though Rome is about to ignite they string the violin of world revolution, or rebury long-buried Tissa and DEW again, or work off inter trade union jealousies. The crucial need for an anti-fascist front incorporating civil society movements, the UNP and JVP is overlooked.

Be that as it may many left parties are not big though the impact they can have and the noise they can generate is disproportionately larger than their size. The big worry is Ranil and the UNP – Sirisena is a slow learner, leave him alone, like Mary’s little lamb he will follow after. I am simply not satisfied that Ranil and the UNP are sufficiently sensitive to the emerging threat. They do not seem to see three things, viz: Racism willsucceed in whipping up a certain amount of unrest and mob activity; second, if it is given a few months unchallenged the grass-roots of the UNP and less ideologically knowledgeable MPs will wobble and turn unreliable; and third, since alleged war-crimes perpetrators include military brass and soldiers the armed forces may be confused and less than 100% dependable. Anyway the army is not much different from what it was in 1983.

I have been harping on this general theme in my two previous pieces and I have no compunction about doing it again. (How many times and for how long did I have to din the Common-Candidate Single-Issue refrain before anyone took notice? Eventually I got the CC but only half the SI). Likewise the developing danger, and more important, how it should be dealt with are worth many repetitions.

Racist mobs, if they materialise must be dispersed quickly, communal virus spreads rapidly and should not be allowed to prance around even for a few weeks. Mobilise the people – civil society, UNPers, JVPers and the Left. The state’s forces are less dependable this time for the reason I mentioned. The 1936 Cable Street example is the right way to disperse fascist and racists – the people of East London drove off Oswald Mosley’s black shirts; they never returned. It is not at all too early to educate people; once proto-fascism gains momentum large numbers are prone to infection.