May 2014 marked the 5th year of the brutal end of the armed conflict in the island of Sri Lanka. The foremost stakeholders of the final phase of the war, the Tamil nation, the Sinhala nation and the international community seem to have different interpretations of the disturbing developments, unfolding since the last phase of the war.

In its narrative, the Government of Sri Lanka (GoSL) keeps obstinately insisting that they liberated the Tamil people from the grip of terror. Though, this year marks the 5th year of the cruel end of war, what it actually means for the Tamil people and the reality on the ground totally contradicts the GoSL narrative. While understanding the GoSL’s empty promises and false hopes, a section of the international community keeps persistently pushing for national reconciliation. It is a serious question how and when this would be feasible considering the reality where the war against a populace is still continued by other means.

The means of war, strategies and fronts have changed for each actor, but not the conflict. The GoSL has waged Psychological Operations (PSY-OPS) mainly through Information Warfare (IW) against the Tamil Diaspora, and equally if not more dangerous, severe military and intelligence activities in the Tamil homeland.

The Tamil peoples’ right to remember their kith and kin slaughtered in the final phase of the war was decisively denied by the Sri Lankan government forces, while the triumphalism of the GoSL continued into the fifth year.

A report of the Secretary-General’s internal review panel on UN action in Sri Lanka, also known as the Petrie report, was released in November 2012, nineteen months after the UN Panel of Experts Report’s release. It stated therein that “[b]ased on an internal review panel report, over 70,000 people are unaccounted for”.

Prior to the UN Internal Review Panel report, a Panel of Experts was appointed by UN Secretary General Ban Ki Moon to advise him on the issue of accountability with regard to any alleged violations of international human rights and humanitarian law during the final stages of the war in Sri Lanka.  According to the UN Panel of Experts Report (published in April 2011) “[t]wo years after the end of the war, there is still no reliable figure for civilian deaths, but multiple sources of information indicate that a range of up to 40,000 civilian deaths cannot be ruled out at this stage. Only a proper investigation can lead to the identification of all of the victims and to the formulation of an accurate figure for the total number of civilian deaths.” 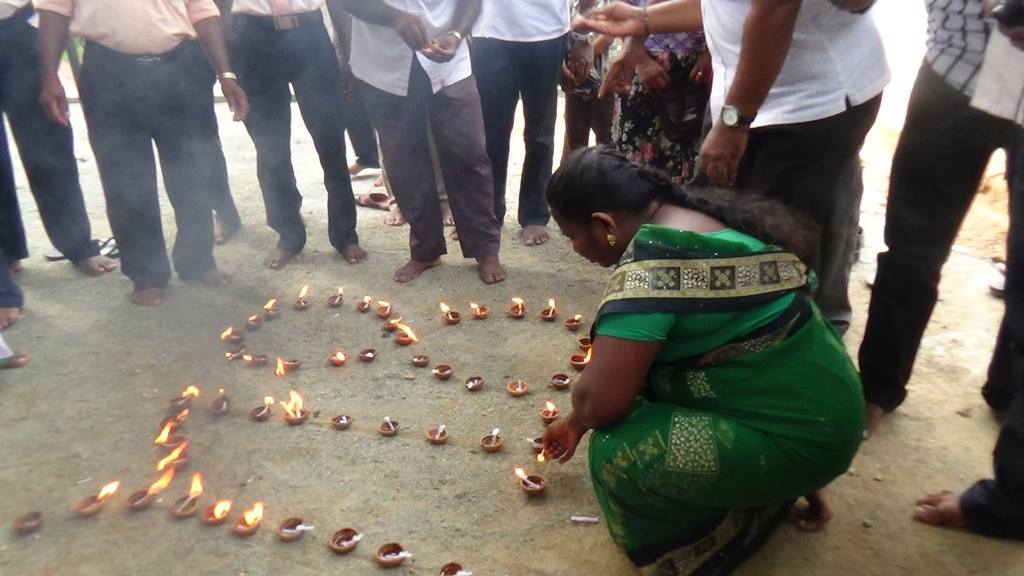 In his submission to the Lessons Learnt and Reconciliation Commission, the Bishop of Mannar, Catholic Diocese Rt. Rev. Dr. Rayappu Joseph pointed out that according to Government figures the population in the Vanni region was 429,059 in early October 2008. The total number of people, however, who emerged from the Vanni into government-controlled areas since then according to UN OCHA 2009 statistics is estimated to be 282,380. Hence, over 146,679 people in the Vanni have been unaccounted for in post-war Sri Lanka.”

However, the GoSL has categorically denied all of those claims, vigorously opposing any independent international investigation into alleged mass atrocities and have continued to host a Victory Day parade with pride, whereas Tamils are systematically denied the opportunity to engage in collective mourning on the same day to remember their lost loved ones. On that day, the North part of Sri Lanka was highly militarized, in order to prevent any commemoration ceremony. In this process, major religious shrines in the North were surrounded by military and military intelligence officers, major regional Tamil news papers offices were besieged, access to major Tamil political party offices were denied, prayers for the dead stopped, blood donation events blocked, there was a ban on even ringing the bells at the Saiva temples, the Northern Provincial Council office ceased it daily activities and the Jaffna University was compelled into being closed.

Mourning is a major part of healing and healing is vital for genuine reconciliation. The GoSL’s denial to the Tamils of the right to collectively remember their loved ones shows the true face of the GoSL and its lack of willingness and commitment towards genuine reconciliation. This lesson was learnt by the Tamils decades ago. It is now time for the actors pushing the reconciliation agenda to learn this lesson, and respond proactively for their deaf silence during this denial of collective remembrance.

It is worthy to note here that Canada’s recent bold and strong moves have the ability to lead to lasting peace in the island when considered from a long term perspective, despite the Sri Lankan regime’s present antagonism towards Canada.

To handle its internal challenges and divert international pressure, the GoSL urgently needed to establish its own ‘LTTE’. This is the strategy behind the story of the revival of the LTTE. Through, the ‘LTTE revival’ story, the GoSL has escalated its militarization process, which is under severe international pressure, in order to extend its demography change project. This containment strategy has multiple faces, such as disintegrating the bond between the Tamil Diaspora and their kith and kin in the ground as most of the published evidence of the mass atrocities that took place during the final stage of the war were gathered and collected with the support of the people in the ground. Through preventing the flow of information between the ground and the Diaspora, the GoSL is attempting to destabilize any sort of Tamil Diaspora engagement with the international community.

As part of this wider containment strategy and as a knee-jerk reaction to the UN resolution on Sri Lanka, the GoSL banned 16 Diaspora organizations and 424 individuals accusing them as financiers of terrorism. Most of the organizations are fighting Sri Lanka’s injustice against the Tamils through nonviolent and democratic means. Concerned actors feel that this is a sinister move and will prove a serious obstacle for genuine reconciliation.

Even though the Tamil Diaspora is struggling to unify based on a single goal amidst its diversity, since there is no strong opposition to the government within Sri Lanka, a core segment of the diaspora remains a formidable challenge to the GoSL.  This is particularly due to their messenger role between their brethren at home and the international community.

While the GoSL aims to shoot the messenger, the Diaspora is building up on nonviolence strategies slowly, but surely. In pursuance of such strategies the diaspora has engaged in formal statements, communication with a wider audience, group representations, symbolic public acts, symbolic strikes, pressures on individuals – that could eventually lead to travel bans on alleged Sri Lankan war criminals, drama and music, processions, public assemblies, ostracism of persons, non-cooperation with Sri Lanka’s social events, customs and institutions, boycott campaigns, rejection of authority and honoring the dead.

The emergence of the Diaspora’s nonviolent strategies has become a stern challenge to the GoSL’s discrediting strategies because it has taken the form of naming and shaming. Therefore, the GoSL has become more vigorous in its attempts to curtail the Diaspora’s moves, but this has only served to make committed activists in the Diaspora more confident in facing the challenges thrown towards them by the GoSL through further nonviolent strategies. This is the utmost pledge that they have taken on the day of commemoration of their beloved ones.