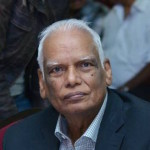 The former Admiral Wasantha Karannagoda has given a lengthy interview toThe Island newspaper (November 21, 2015) rebutting any claim that there had been a secret detention facility within the Trincomalee naval base during Eelam war IV. The statement that naval facilities within Trincomalee base were used as torture chambers was made by the UN Working Group on Enforced or Involuntary Disappearances (WGEID) in Colombo at the end of a 10-day visit to Sri Lanka.

Karannagoda asserts “We didn’t operate torture chambers at the Trinco base or any other command. There was no requirement to do so. ”

He said that during the war renegade LTTE cadres had been accommodated at the Trinco facility which some interested parties now wanted to portray as a torture chamber. “We didn’t operate torture chambers at the Trinco base or any other command. There was no requirement to do so. A substantial number of LTTE dissidents had thrown their weight behind the combined military campaign directed at the LTTE, Karannagoda said, adding that the Navy had no option but to accommodate them in a previously unused building. We used British-time air raid shelters,” Karannagoda said, alleging that a despicable attempt was being made to bring the war winning military into disrepute.

Karannagoda further alleged the ridiculous allegation directed at the Navy was obviously part of their strategy to hold the country responsible for alleged atrocities committed during the war. The retired Admiral expressed disappointment that some had conveniently forgotten the sacrifices made by the military to bring the LTTE to its knees.

In other words Karannagoda says those who were housed in naval facilities were renegade LTTE cadres who owed allegiance to Karuna. If that is the case why they were kept in far away Trincomalee Naval base instead of army camps like Palaly or Panagoda?

“Many of those who had been categorised as missing were living overseas. The recent Paris massacre revealed how borders could be accessed using various travel documents and exploiting ground situation. The country was being punished for eradicating terrorism. Whatever the propaganda the vast majority of Thamil speaking people were free to move on with their lives since May 2009” said Karannagoda. A Thamil website says following the information disclosed by International Truth and Justice Project (ITJP) a Police team under an ASP has commenced investigations and about 20 Naval personnel are likely to be arrested. So far the CID has recorded statements of 74 naval personnel in connection with the secret detention centres at Trincomalee Naval base.

A survivor who was detained and tortured in the base at Trincomalee at some point between 2009-2012, speaking to the Sri Lanka ITJP said, “Lt. Commander Welegedara was in charge of the secret camp when we were first brought there. He did not personally hurt me but each time I was interrogated they told me that he had ordered them to do so.”

Describing the torture cells and environment the survivor added, “I saw blood and people’s names who had been scratched into the walls with a sharp instrument. I could also hear men crying and screaming. To me it sounded like they were being tortured. I would hear the screams and crying every other day.”

Karannagoda’s claim that many of those who had been categorised as missing were living overseas is adding insult to injury. This is exactly what the now disgraced former Chief Justice Mohan Pieris told United Nations Committee against Torture. Questioned regarding the whereabouts of missing journalist Prageeth Ekneligodafrom December 2011 he replied “Our current information is that Mr. Ekneligoda has taken refuge in a foreign country.” Peiris was implying that Ekneligoda’s disappearance was a staged event to tarnish Sri Lanka’s reputation overseas. After Peiris made these comments, they attracted widespread international coverage and he appeared to be defending the country’s integrity at the United Nations. (See more here)

In August this year four army personnel were arrested by the CID in connection with the disappearance of journalist Prageeth Ekneligoda, police said. Police said two lieutenant colonels, a staff sergeant and a corporal were among the arrested.

The WGEID drew attention to the secret cells after they were taken to the location by the Criminal Investigations Department (CID) at the end of a visit to Sri Lanka. In the past the existence of secret torture camps in Sri Lanka has been long reported by Thamil Civil Society and politicians in the North-East. Earlier this year Sri Lanka’s Prime Minister Ranil Wickremesinghe denied allegations of the existence of torture camps in Sri Lanka.

The ITJP of which Yasmin Sooka is the Executive Director, said it has given the UN Working Group the GPS coordinates for the location of the secret cells in the camp (GPS: 8’33’26’13 N, 81’14’32’87 E) and the names of naval intelligence officers, whom witnesses say were in charge of the site. This information as well as detailed site sketches by survivors was shared by ITJP with WGEID in a confidential written submission before their visit to Sri Lanka. ITJP says it is prepared to release the names and ranks of 10 naval members, whom survivors state were involved in torture at this site, as well as the details of an officer and other guards present, who were fully aware of the torture that took place.

On  November 20, 2015  M.A. Sumanthiran,  Thamil National Alliance (TNA) MP  demanded answers from the authorities on the underground secret cells at the Trincomalee navy camp, in light of an admission by former navy Commander Admiral Wasantha Karannagoda that those cells were used to detain people. Sumanthiran questioned as to why people like Karannagoda are not being investigated over the cells. Sumanthiran quoted Karannagoda as telling the media that the cells were part of the British colonial era and was used when he was the Navy chief to detain suspects, but not torture them. Sumanthiran said that the authorities must investigate where those people detained at the cells are now and if they were tortured. In March this year Suresh Premachandran, MP (TNA) claimed he had witnesses that could testify to prove that there were secret detention centres in the North-East.

Victims who survived Sri Lanka’s secret torture camps and escaped abroad have said that army general Lt Commander Welegedara gave orders for their interrogations at Sri Lanka’s naval dockyard torture base. A survivor who was detained and tortured in the base at Trincomalee at some point between 2009-2012, speaking to the ITJP, said, “Lt. Commander Welegedara was in charge of the secret camp when we were first brought there. He did not personally hurt me but each time I was interrogated they told me that he had ordered them to do so.”

Describing the torture cells and environment the survivor added, “I saw blood and people’s names who had been scratched into the walls with a sharp instrument. I could also hear men crying and screaming. To me it sounded like they were being tortured. I would hear the screams and crying every other day.” His statement corroborates with the findings of the UN WGEID.    Any credible investigation into the Trincomalee secret cells will most likely have to include the key military figure Lt Commander Welegedara who is widely known to have run the secret detention operations in the Trincomalee naval dockyard.

Six years after the government of Sri Lanka declared an end to decades of civil conflict with the LTTE; thousands of people are still missing, according to the UN and Sri Lankan human rights activists.   The WGEID of the UN Office for the High Commissioner for Human Rights has recorded 5,671 reported cases of wartime-related disappearance in Sri Lanka, not counting people who went missing in the final stages of fighting from 2008 to 2009. This figure obviously includes those who left Vanni between 2008 and May, 2009 on their own accord, injured people shipped by ICRC to Trincomalee etc.  As stated by the Darusman UN Experts Panel appointed by UN Secretary General  the number of people who died  during the last phase of the war is estimated  between 40,000 – 70.000. This figure is nearer to the truth than the figure 146,679 which is the difference between 429,059 – 282,380. Of course, this is a far cry from the preposterous claim by the government there was ‘zero casualty’ during the war.

In 2009, the US Department of State in its unclassified Report to Congress on Incidents during the Recent Conflict in Sri Lanka stated: ‘The State Department has not received casualty estimates covering the entire reporting period from January to May 2009. However, one organization, which did not differentiate between civilians and LTTE cadres, recorded 6,710 people killed and 15,102 people injured between January 20 to April 20.2009. These numbers were presented with a caveat, supported by other sources, that the numbers actually killed and injured are probably higher.
With regard to documented deaths, the International Crisis Group (ICG) had this to say: ‘UN agencies, working closely with officials and aid workers located in the conflict zone, documented nearly 7,000 civilians killed from January to April 2009. Those who compiled these internal numbers deemed them reliable to the extent they reflected actual conflict deaths but maintain it was a work in progress and incomplete.’

On 18th May 2009, a large number of witnesses saw more than a hundred LTTE military and civilian administration leaders surrender to the Sri Lankan army close to the Vadduvaakal Bridge. The vast majority of these people have subsequently disappeared and, according to eyewitnesses, were last seen in the custody of the Sri Lankan military. Those who surrendered on 18 May were screened and mostly put in a barbed wire holding area just south of the Vadduvaakal Bridge, which was in the control of the Sri Lankan armed forces. Many surrendered with an elderly Catholic Priest, Father Francis Joseph, who recorded the names of surrendees in a list for the military. Many eyewitnesses saw these prisoners, and in some cases their family members, loaded on to buses and taken away by the military. They and the priest have not been seen since being taken custody of by the military.

Here is a partial list of those LTTE cadres who surrendered to the armed forces on May 18, 2009 but their whereabouts unknown.

Yasmin Sooka on behalf of the ITJP released a list of 110 disappeared people seen surrendering to the Sri Lankan armed forces by eye witnesses on May 18, 2009. The press release said “The ITJP wishes the family members and relatives of the surrendees to know that there are eyewitnesses to the surrender of their loved ones to the military on May 18, 2009.

On May 31, 2009, Lankafirst.com website quoting Government Information Department sources, reported that some top Tiger leaders under the custody of the military were going through series of serious investigation by the security forces.  “Former eastern province political wing leader and subsequently in charge of the economic division Karikalan, former spokesman of the LTTE Yogaratnam Yogi, former EROS MP turned advisor to the LTTE V. Balakumar, a former spokesman of the LTTE Lawrence Thilakar, former Deputy political section leader Thangkan, former head of the political section for Jaffna district Ilamparithi, former Trincomalee political wing leader Elilan, former head of the LTTE Sports Department Paappa, former head of the administrative division of the LTTE Puvannan and deputy international head Gnanam are in custody,” it said.

There is mounting evidence to show secret cells existed at least till end of 2011at the Trincomalee Naval base.  The government must  investigate thoroughly those disappeared after taken into custody, including those at Vadduvaakal, by the armed forces during the dark era of Mahinda Rajapaksa’s dictatorial regime.

Notwithstanding denial by former Admiral Wasantha Karannagoda and Prime Minister Ranil Wickremesinghe thousands of missing persons could not have vanished into thin air.