SAN ANTONIO– As a deportation date nears for a San Antonio family with roots in Sri Lanka, friends in their local community came together to try to get the attention of their local congressman.

Their message is a simple and clear one they hope Congressman Joaquin Castro will hear.

“So we are trying to call on congressman Castro and other folks in the community to really step up and to see the support that the family has and to take action to make sure that they can stay here,” said Mohammad Abdollahi of RACIES Texas.

The family has collected over 5,500 signatures on their petition to try to get their father released from a detention center. Friends in their community can give testimony to their character.

“I know they are a good family and they’re not trying to hurt anybody and I really want their family to be able to be together,” Christina Espinosa said.

“I just think the compassionate and the gospel thing to do is to let them stay,” a friend said. “They are good people.” 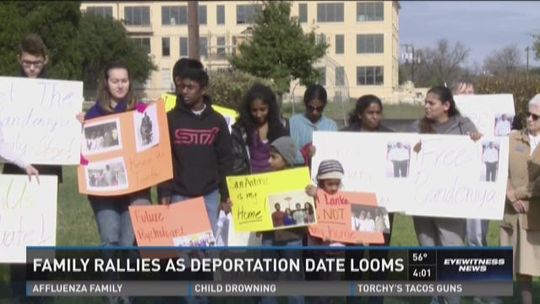 Kevin Randenyia and his family are thankful for all of the support.

“It makes me feel good that I’ve got people watching my back and are willing to go out on a limb to help me through our time of trouble,” Randenyia said.

We contacted ICE on why the father, Saman, was detained for deportation back on December 1st.

They released this statement reading in part:

Mr. Randeniya was issued a final order of removal by a federal immigration judge on Nov. 2, 2006. Since then he’s appealed his case to both the Board of Immigration Appeals and the Second Circuit Court of Appeals, which have both dismissed his case. His most recent stay of removal application was submitted in October 2015 which was denied.

But the family says that despite a denial, they will still try to stay in the country and city they know as home.

“We’re just hoping we can get through this.”