WE  remember that the Independence of Ceylon (as Sri Lanka was then known) was gained on February 4, 1948. The UNP was founded on 6 September 1946 by amalgamating three right-leaning pro-dominion parties from the majority Sinhalese community and minority Tamil and Muslim communities. It was founded by Don Stephen Senanayake, who was in the forefront in the struggle for independence from the United Kingdom, having resigned from the Ceylon National Congress because he disagreed with its revised aim of ‘the achieving of freedom’ from the British Empire.

The First Prime Minister of Ceylon Rt. Hon. D.S. Senanayake the Leader of the United National Party was instrumental to obtain independence from British rule through smooth transition after India gained its independence. The National Flag of Sri Lanka represents the country and her heritage as a rallying symbol that integrates the minorities with the majority race. Sri Lanka’s National Flag is an improvisation of the civil standard of the last king of Sri Lanka, Sri Wickrama Rajasinha.

The civil standard had a passant royal lion with a sword in its right forepaw at the centre, and a Bo leaf on each of the four corners on a plain border. When Sri Lanka gained independence from Great Britain on February 4, 1948, it was the Lion Flag of the last king of Sri Lanka which was hoisted once again.

The first Prime Minister of independent Sri Lanka, D.S. Senanayake, appointed a committee to advise the government on the design of a new national flag. The design approved by the committee in 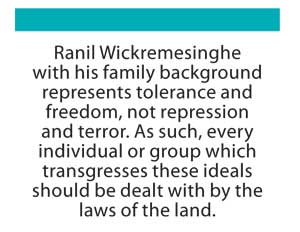 February1950 retained the symbol of the lion with the sword and the Bo leaves from the civil standard of the last king of Sri Lanka, with the inclusion of two vertical stripes in green and orange.

The significance of each symbol of the national flag is as follows:
The lion in the flag represents the Sinhala race.
The sword of the lion represents the sovereignty of the country.
Curly hair on the lion’s head indicates religious observance, wisdom and meditation.
The beard denotes purity of words.
The handle of the sword highlights the elements of water, fire, air and earth.
The nose indicates intelligence.
The two front paws purport to purity in handling wealth.
The vertical stripe of orange represents the minority Tamils and the green vertical stripe, the minority Muslims.
The border around the flag, which is yellow, represents other minor races.
The Bo leaves at the four corners of the flag represent Buddhism and its influence on the nation. They also stand for the four virtues – kindness, friendliness, happiness and equanimity.
The maroon portion of the flag manifests the other religions.
The National Flag was hoisted for the first time on March 3, 1950.

A national anthem should be sung in its original version in the original language it was composed. All citizens should learn the meaning, whatever race they may belong to. The National Anthem of Sri Lanka should be sung in Sinhala: One national anthem, one nation.
Article 7 of the Constitution of the Democratic Socialist Republic of Sri Lanka states, “The National Anthem of the Republic of Sri Lanka shall be Sri Lanka Matha, the words and music of which are set out in the Third Schedule”.
The third schedule contains only the words in Sinhala. As such, the only valid and legal version of the National Anthem is the official Sinhala version. Sri Lanka’s literacy rate is very high, all citizens can learn the meaning of the National Anthem and to sing it within an hour.
A national anthem (national hymn or song) is a patriotic musical composition that evokes and eulogises the history and traditions of its people, and is recognised either by a nation’s government as the official national song, or by convention through use by the public.
Certain etiquette may be involved in the playing of a country’s anthem. These usually involve elements such as military honours, standing up and removing headwear. In diplomatic situations, the rules may be very formal.
Sri Lanka Matha is the National Anthem of Sri Lanka. The words and music were written by Ananda Samarakoon in 1940 in Sinhala, and was officially adopted as the National Anthem on November 22, 1951 by a committee headed by Sir Edwin Wijeyeratne.

Through the experience he gained through many political tidal waves and his survival to become the leader of the nation, President Rajapaksa knows no fear.
He has no doubts. He thinks hard before he makes decisions; once the decision has been made, he will justify his cause with his skills of advocacy which has won over many of his opponents. Never in the political history of any country has so many Opposition members joined and supported the President whom they once opposed.
The demands of an outraged community have been met. We have achieved a victory for a safer world, for our democratic values, and for a stronger Sri Lanka.
We fought and liberated the people held hostage, what we achieved and what we have to do now to advance peace, and together with the people, forge a future of freedom, progress and harmony.
The terrorists were the cause for men of all ages to be separated from their loved ones, killed and forced to join the terrorists, children made to watch their parents die; a whole people forced to abandon, within hours, communities their families had spent generations building.

When our diplomatic efforts to avert this horror with the LTTE were rebuffed, and violence mounted, our Armed Forces took affirmative action. Now the people are free, the roads that were closed for years have opened, the people have been liberated.

Finally, we have averted the wider war terrorism may well have sparked. Now, we’re entering a new phase – building peace – and there are formidable challenges, the foremost amongst them is the stability of leadership and the Government. PM Ranil Wickremesinghe has established diplomatic and economic relations with the international community.

The Wickremesinghe Doctrine of Development

We must build and develop our country. For that to happen, the European Union must plan for tomorrow, not just today. Our friends – the United States, China, India and the United Kingdom – must assist us in our endeavours. They must provide most of the resources for this effort, but it is in Sri Lanka’s interest to do our part as well. We must pave a path to a prosperous shared future, a unifying magnet more powerful than the pull of hatred and destruction that has threatened to tear us apart.

Sri Lanka still faces great challenges in this world, but we look forward to meeting them. We can successfully maintain the territorial integrity of Sri Lanka .The Prime Minister has been successful in ironing out the creases of strained international relations with his wide experience and expertise of leadership.

Patriotism is the ground norm of a civilized society. Civil allegiance is the duty of loyalty and obedience which a person owes to the State of which he is a citizen.

Due to conflicts which we could have long resolved, external forces with vested interests have all sought to intervene, some in the pretext of resolving the issue, but our experience has proved that the gap of resolution does not seem to be narrower now.

Those who finance terror through some NGOs, those who launder their money, and those that cover their tracks are every bit as guilty as the fanatic who commits the final act. We look for diplomacy, but there is no diplomacy with some of those opposed to us.

We do not consider them as opponents, but they oppose every conceivable move we make to develop the country. Sometimes, there is no compromise with such people, no meeting of minds – no point of understanding – so we would have a just choice – defeat it or be defeated by it. We learnt that however much we strive for peace, we need a strong defence capability where a peaceful approach fails.

Whatever the dangers of the action we take, the dangers of inaction are far greater.
Laws will have to be changed, not to deny the basic liberties, but to prevent their abuse and protect the most basic liberty of all; freedom from terror.

We must always be on guard for those who will exploit and manipulate for their own narrow political ends, who will distort the essence of pluralism and tolerance for their own extremist agendas. People are being tainted by the reckless media. It is a national catastrophe for the nation. We must enact new laws or amend the old.
We must work as a community to ensure that everyone, not just a privileged few, get the collective ability to further the individual’s interests. The governing idea of modern social democracy is founded on the principles of social justice. That people should rise according to merit not birth; that the test of any decent society is not the contentment of the wealthy and strong, but the commitment to the poor and weak.
However, values aren’t enough. The mantle of leadership comes at a price; the courage to learn and change; to show how values that stand for all ages can be applied in a way relevant to each age.
We learnt that equality is about equal worth and not equal outcomes. They demand more. We are not alone in this. All around the world, governments are struggling with the same problems. The program of reforms is huge. We must have co-operation, determination and consensus. We are a community of people, whose self interests and mutual interest at crucial points merge and that it is through a sense of justice that a community is born and nurtured.
This is the moment to bring the faiths closer together, in understanding our common values and heritage as a source of unity and strength. By the strength of our common endeavours, we achieve more together than we can alone. We must reach beyond our fears and divisions to a new time of great and common purpose. Let us trace the roots of affirmative action.
Let us determine what it is and what it isn’t. Let us see where it has worked and where it hasn’t and ask ourselves what we need to do now. Prime Minister Ranil Wickremesinghe has been stoic in the face of adversity. He has earnestly endeavoured to unify the nation. He is totally committed to serve the people. It is genuine, unwavering and selfless.

Ranil Wickremesinghe with his family background represents tolerance and freedom, not repression and terror. As such, every individual or group which transgresses these ideals should be dealt with by the laws of the land.