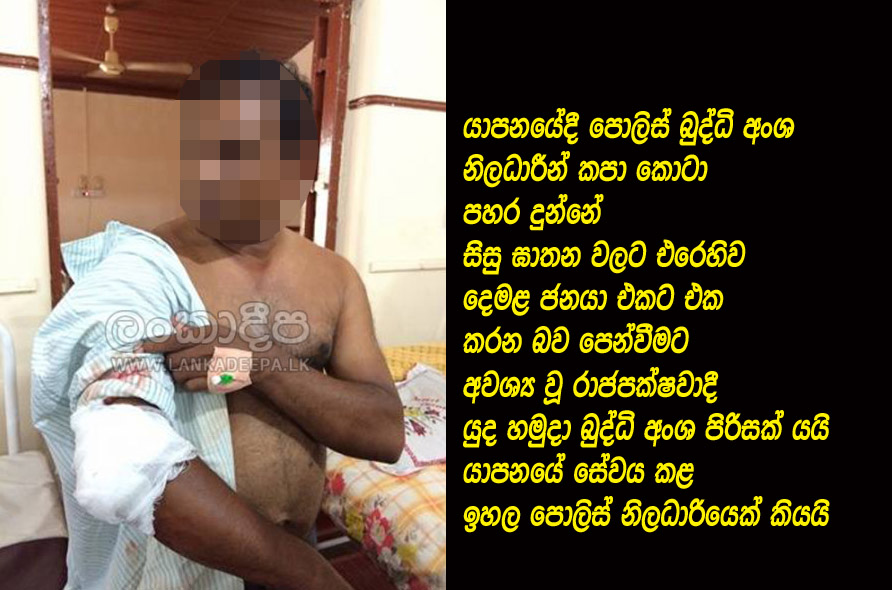 (Lanka-e-News -24.Oct.2016, 4.00PM)  The killing of two Jaffna university students yesterday , and the subsequent  attack launched  yesterday (23) causing injuries to two police officers of the intelligence division is a result of a conspiracy of the pro Rajapakses , a high ranking police officer who was serving in the Jaffna police for a long time revealed with supporting evidence to Lanka e news inside information division.

The shooting down of the University  students yesterday was the first incident of killing of civilians by the police after 1983 in Jaffna . Even during the war though civilians were killed by the forces , the police did not. Hence , suddenly the students who travelled on a motor bike being killed by shooting allegedly for not halting when ordered by the police is most suspicious and is an absolute conspiratorial killing , the officer further pointed out.

Usually  what the police do  in the event of a motor cyclist not heeding the police signal to stop is , the registration number of the vehicle is noted , and investigation conducted after obtaining the details of that vehicle from the motor vehicle registration department  .

Unlike in the days gone by , now the registration number can be  faxed and details collected within an hour . Under such circumstances , just because a motor cycle rider does not stop for a police signal , shooting is uncalled for and unnecessary , implying that this shooting is  based on a  conspiracy  , the high rung police officer explained.

Besides when the emergency regulations  are not in operation , the cop cannot fire a T 56 weapon unless he has been given prior orders by a superior officer to shoot . The high ranking police officer  therefore said , this shooting is not just an accident , and there is more to it than eyes and ears meet- that is a calculated conspiracy.

On the orders  given by  DIG Ajith Rohana (in charge of legal division)  who is another pro Rajapakse stooge in Colombo ,  this shooting incident  was recorded as a vehicle  accident in the police registers. However when the situation turned  dangerously controversial and began to boomerang , the records in the three registers were withdrawn, the high ranking police officer exposed.

At the same time , last noon (23), two officers, a sergeant and a police constable in civil attire of the police intelligence division who were traveling on a motorbike were cut and injured in Chunnakam Town , Jaffna . This was to incite a ‘war’ in Jaffna by the pro  Rajapakse conspirators , the high rung police officer  added.

The assailants who came in three motorcycles sans registration numbers had attacked the two cops , and fled away. These violent actions are being carried out by pro Rajapakse army intelligence division members to capitalize on the deaths of the University students and  to make a false show that the attack was to avenge the death of the Tamil students  with a view to stoke racial hatred,  the high ranking police officer went on to elucidate.

This attack on the two cops was launched about a mile away from the funeral house of the  murdered student . What’s more ? it is only a restricted group and those  of the intelligence division that are close to the cops Navaratne and Herath (who were in civil attire) who  can identify them .

In  addition ,  in that area , no ordinary resident travels  in vehicles without registration numbers.

This is therefore a calculated pro Rajapakse diabolic  aim and ruthless conspiracy to kindle a war that is now non existent  and resuscitate what is long dead and buried, the high rung police officer pointed out .

While the moronic leaders of the good governance are digging their own graves by still keeping back the chief of the army  intelligence division of the Rajapakse era ,and  though the Jaffna  commander Mahinda Haturusinghe , a lackey and lickspittle of Rajapakses was removed, Colonels who are  his bootlicking henchmen are still in Jaffna , and they are creating unnecessary murders and mayhem in Jaffna after enlisting  about 200 individuals wearing black Tee shirts carrying  weapons (concealed) , the same high rung police officer regretted.

Apart from these two incidents ,it is after the speech of the president on the 12 th with the aim of safeguarding ex defense secretary Gotabaya Rajapakse   , Edirisinghe Jayamanne committed suicide on the 14 th after leaving a note that he killed Lasantha .If these incidents are pieced together , it is clear the Rajapakses have risen  after dusting themselves off the ashes . Yet , as long as  good governance government cannot perceive these dangerous portents , it is headed for a holocaust , the high rung officer lamented with profound concern.