The Tamil National Alliance (TNA) has welcomed the report of the UN High Commissioner for Human Rights on the implementation of the 2015 Human Rights Council resolution, and its recommendations. 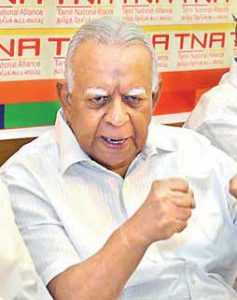 Issuing a statement today the TNA said: “The Tamil National Alliance (TNA) welcomes the report of the UN High Commissioner for Human Rights on the implementation of the 2015 Human Rights Council resolution, and its recommendations. While the report acknowledges some areas of progress, such as discussions on constitutional reform, it is critical of the government’s failure to deliver with respect to a number of critical issues. The TNA shares the concerns of the Report that confidence building measures such as land releases, release of prisoners, repeal of the PTA, reform of the Victim and Witness Protection Authority and ending military involvement in commercial and civilian activities have not been pursued satisfactorily. In fact, the failure of the government on these issues are steadily eroding the trust of our people.

“We have continued to express our concern about the lack of progress on the issue of accountability, and have called on the government to present a time-bound action plan to implement its own commitments. The systemic failure to make progress on emblematic cases in the regular courts highlights the need for a special court with robust international participation in keeping with the government’s commitments. We welcome the High Commissioner’s recommendation echoing this demand. We also call on the government to operationalize the Office on Missing Persons forthwith. The inexplicable delay in doing so unconscionably prolongs the agony of the families of the disappeared.