There is no gainsaying my assertion that Sri Lankans are prudes when it comes to sex, especially sex outside of marriage. Whether on Galle Face Green or in Peradeniya Gardens, the local constabulary make it their business to go around harassing youngsters making out beneath the minimum of privacy an umbrella offers.

Private refuges for those wanting to get some action are few: the back row of a cinema, a room by the hour in a decrepit ‘hotel’, a deserted classroom after school. While one might have got up to a little premarital mischief oneself, one naively assumes no one else has.

Sex, like so much else swept under the carpet during Victorian times, is yet to emerge as a topic suitable for even adult discussion in Sri Lanka. But even as puritanical adults persist in pretending that it is the stork that brings home the babies, young Sri Lankans have entered on a trajectory of promiscuity all on their own, some of it happy, some of it sad.

Here I summarise a number of recent studies by doctors dealing with sexual health and argue it is time Sri Lankan adults—especially parents—enter into a more mature conversation with their preteen children on the subject of sex. Sources of the information presented here, cited within brackets [ ], are listed at the end of the article.

Sex in the highlands

A recent study led by Dr. Niroshan Jayasekara (University of Sydney) on the sexual habits and histories of 400 plantation workers aged 18-24 in the Nuwara Eliya District showed up some data that might surprise you [1].

The average age at which boys had their sexual debut was 13½ years, and girls 18½ years (5% had had their first sexual encounter before age 10). In all, 86% of boys and 4% of girls reported at least one homosexual experience (initially with an older partner). Among males, 35% had had two to five sexual partners, while 28% had had more than five.

The researchers tested all participants for common Sexually Transmitted Infections (STIs). Happily, none were positive for HIV or hepatitis B, and only one for syphilis. Although more than 90% of the group were literate, 59% had learned about sex not from books or the media, but from friends, telling researchers that “schoolteachers were the least reliable to discuss sexuality-related topics”.

Sex in the city

Although 80% of boys reported that they had learned about reproductive and sexual health issues in school, 58% admitted that peers were their first choice for sexuality-related consultation, only 12% admitting they would take their sexual problems to their mothers (60% of girls, however, would ask ammi).

It’s not all roses

OK, I get it: Sri Lanka is beginning to sound a bit like Margaret Meade’s Samoa [4], an idyllic island in which everyone seems to be having far too much of a good thing. But there is a dark side. In 2009 Drs. Perera and Østbye (Duke University) surveyed 2,389 high-school students (almost all aged 18) in southern Sri Lanka [2]. They found 14% had suffered sexual abuse as children. Unsurprisingly, of children not residing with their parents, 20.6% were victims.

Worryingly, an earlier study by Perera & Reece’s [3] too, had 19.1% of boys and 11.6% of girls reporting that they had been forced to participate in sex. This resonates with Dr. Jayasekara’s study [1], which showed that 17% of the participants or their sexual partner had at least one illegal abortion following an unwanted pregnancy.

Now pause and ponder a while on the tragedy these figures imply. The statistics show that almost one in every five boys and one in every 10 girls in Sri Lanka has been raped (i.e., forced to have sex with someone against their will). In at least some parts of the country (e.g. Nuwara Eliya), one in every six girls has had an illegal abortion (there is almost no provision for legal abortion in Sri Lanka: something I will discuss in a separate article); and one in every seven children of either sex self-identify as having been a victim of sexual abuse. Any one of them could well be—and probably is—your son, your niece or your best-friend’s daughter.

And if you think this happens only to the poor, think again: Perera and Østbye’s study [3] showed that children in the highest socio-economic group were much more likely to be abused than those in the lowest (18.4% vs. 12.3%), and that maths/science-stream students were at almost twice the risk (19.8%) as those studying the arts (11%).

In a more recent transnational study by Rachel Jewkes et al. [5], 6.2% of 1,440 Sri Lankan men interviewed actually admitted to having perpetrated rape, 25% of these on multiple occasions; astonishingly, 38% of the rapists said their victims had included males, though only 2% had exclusively raped males.

Almost 90% of rapists were in the age group 15-29 when they first committed rape; 78% of those who raped a non-partner woman said they felt it was their sexual entitlement, only 33% admitting to feeling any guilt after the act. Just 3.2% of rapists had been arrested, a negligible 2.1% were sent to prison for their crime.

Homosexuality is no longer considered an illness (homosexuals are born that way: get used to it) and many countries have recognised gay marriage. Just as equal consideration of women is a novelty that is barely a century old, and that of disabled and coloured people (yes, us!) only a few decades, the extension of equal rights to homosexuals remains among the last bastions of prejudice still recognised by law. In our region Nepal became the first country following a Supreme Court ruling in 2007 to decriminalise homosexuality, though Nepalese society is yet to give the nod to same-sex marriage.

As for us, Section 365A of Sri Lanka’s Penal Code states: “Any person who in public or in private, commits, or is a party to the commission of, or procures or attempts to procure the commission by any person of, any act of gross indecency with another person, shall be guilty of an offense, and shall be punished with imprisonment of either description for a term which may extend to two years…”

Several recent studies highlight aspects of and attitudes towards homosexual behaviour that would surprise many: e.g., the allegedly high incidence of sexual molestation of male terror suspects in custody [6]; or the alleged rape of male prostitutes by police [7].

Men and boys catering to sex tourists too, present a paradox that is hard to resolve. The spectre of foreign paedophiles roaming our beaches is repulsive even to the most hard-hearted among us. References to the “child-sex tourism industry” are commonplace in the media.

But another recent study [8] suggests that sexual moralists may need to think again. Here 26 male and eight female sex workers in beach resorts between Mount Lavinia and Tangalle were interviewed to understand whether they were “beach boys” or “sexually exploited children”. The former, after all, are perceived as a menace while the latter are sympathised with as victims. 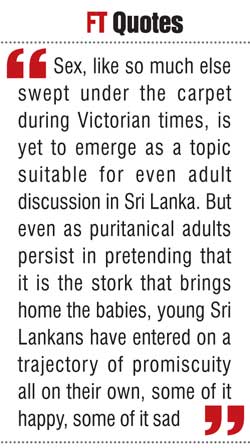 But Dr. Miller shows there is little to separate [adult] ‘beach-boys’ from ‘exploited children’ (as which many of the former began their careers): 85% of them had commercial sex with foreigners, only 18% exclusively heterosexual.

The first sexual encounter, between age 14 and 23, was always consensual and supported by assurances from peers and the attraction of monetary reward; they saw nothing morally wrong with their occupation. Almost none of the men perceived themselves as ‘gay’.

While each of us might each be entitled to his own prejudices, none of us is entitled to his own facts. The facts highlighted by these recent studies, all of them done by respected medical or scientific professionals and published in learned, peer-reviewed journals, show Sri Lanka chronically unable to come to terms with sex.

I suspect most people reading this would respond to these data with an exclamation like “Wow, I had no idea!” That is feeble: we each of us do have an idea. Statistics dictate that each of us has a sexually-abused child, a gay person, or a rape victim within our inner circle of family and friends. Yet, so steeped are we in Victorian morality that we cannot bring ourselves to accept it.

It is time children received a proper education on sex. The age in which parents and teachers are among the last people to whom an abused child would turn must end. Our attitudes to sex are perhaps a last vestige of the British colonial values to which we cling to so dearly, even as Britain itself has moved on. It was only in 2013, after all, that the Marriage (Same Sex Couples) Bill of the UK, legalised gay marriage.

So bigoted is Sri Lanka still that I suspect our response to all this will be (as we do whenever a national quandary is faced) to get ourselves a nice big carpet and sweep everything under it.

[1] Jayasekara, A. A. I. N. et al., 2012. A cross sectional study on sexual practices[sic] and knowledge related to sexual health of youth in the tea plantation sector; NuwaraEliya district, Sri Lanka. The Sri Lanka Journal of Venereology, 3(1): 41-46.

[5] Jewkes, R. et al. 2013. Prevalence of and factors associated with non-partner rape perpetration: findings from the UN Multi-country Crosssectional Study on Men and Violence in Asia and the Pacific. The Lancet Global Health, doihttp://dx.doi.org/10.1016/S2214-109X(13)70069-X