TELLIPALAI: After working two long shifts during the week Dr Anusha Yoganathan was working a normal shift on Wednesday again at the Tellippalai Trail Cancer Hospital. But seated in ward 14 despite her unwavering smile, she appears to have much on her mind. 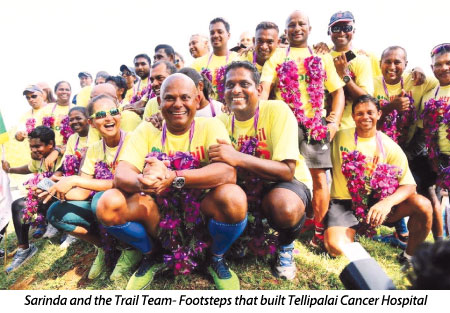 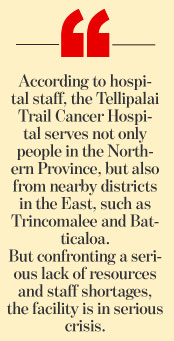 Dr Anusha Yoganathan who has been working at the unit for 13 years is one of the longest serving doctors at the Oncology Unit. “I joined the Oncology Unit during the time it was located at the Jaffna Teaching Hospital and later transferred to Tellippalai” she says. Recalling her early days at the Jaffna Teaching Hospital, Yoganathan says despite a large number of patients, those were, in retrospect, easier times.

Unlike work in other units, the stresses of working in a cancer unit can take a serious toll. Patients are gravely ill, resources poor and work conditions less than ideal. All this seemed to weigh heavily on Dr Yoganathan, who got tearful when she explained her 13 year tenure in the Oncology Unit.

She says that the initial agreement was that the consultants of each of the three oncology units at the cancer hospital will be equipped with six medical officers to assist them. “So we agreed to these conditions at the time” she said.

But four years down the line, a total of eight medical officers have had to assist each consultant with four doctors having to deal with the workload of two Oncology Units due to a shortage of doctors. Though expected to be on call between 8 am – 10 am the following day once in six days, Dr Yoganathan and others often find themselves taking up more on-call duty days while also running clinics every day of the week including mobile clinics in Kilinochchi and Mannar. On top of the large paper workload, they are also expected to train new medical officers she explains.

Dr Yoganathan says she can’t remember the last time she attended her child’s school events. “Even when really necessary, it’s almost impossible to get leave – taking a day off on Thursdays, when it is clinic day at the hospital is out of the question since we are so short of doctors,” she explains tearfully. Many times, she contemplated leaving Tellipallai, but each time she decided to stay back, because she felt her services were fulfilling a humanitarian need. “But I don’t know how to explain the problems we face.”

The situation has become so dire, with several medical officers having requested transfers out of the hospital, that the eight doctors remaining contemplated a token strike to bring the serious shortage of doctors to the attention of the authorities. In the end, the doctors decided against the strike since it would inconvenience patients in dire need of treatment.

The first Trail Sri Lanka walk for a cause, led by Sarinda Unamboowe and Nathan Sivagananathan, took place in 2011, starting in Dondra Head in Matara and ending at Point Pedro in Jaffna over the course of 28 days. The goal of the walk was to raise USD 1 million to build a cancer treatment unit as an extension to the Tellipalai hospital in the war affected Jaffna District. 30,000 walkers and more than 250,000 donors later, Unamboowe and Sivagananathan exceeded their initial targets, raising USD 2.6 million. A decision was then made to build an entirely separate cancer hospital in Tellipalai. The Tellipalai Trail Cancer Hospital began operating in 2014, and last year, it treated 8143 out patients and recorded 4036 war admissions. At the moment, Tellipalai Trail Cancer Hospital is currently the only facility to offer Cancer treatment in the formerly embattled Northern Province. Without the hospital, patients from the North would have to travel hundreds of miles to get treatment at the Maharagama Cancer Hospital.

At first, he wondered why there were so few admissions at the Tellipalai Cancer Hospital, Sarinda Unamboowe, one of the trail leaders told Sunday Observer in an interview. “But later the doctors explained that this was because most of the patients would come in for treatment and go home the same day,” Unamboowe explained. “This is a positive thing, it means patients don’t have to travel vast distances, uprooted from home and their families, but can get the medical treatment and go back home to rest,” he said.

According to hospital staff, the Tellipalai Trail Cancer Hospital serves not only people in the Northern Province, but also from nearby districts in the East, such as Trincomalee and Batticaloa.

But confronting a serious lack of resources and staff shortages, the facility is in serious crisis.

They were aware that the hospital was facing a resources problem, but not that the situation had become so dire, Unamboowe told Sunday Observer upon learning that the doctors at Tellipalai were contemplating trade union action over the staff shortages.

“The problem is that the hospital currently comes under the Northern Provincial Council and is not under the Central Government. Therefore, their allocation of funds and resources are limited and doctors are not keen to work at the medical facility,” he explained.

Unamboowe who is also the CEO of MAS Kreeda, said they had tried to help. “MAS has two factories in Killinochchi and one of them has taken on Tellipalai Trail Cancer Hospital on as a corporate social responsibility project – and allocates some money for maintenance of the facility,” he said.

But the problem of a lack of doctors is not one the walkers can solve.

“One option is to ask the Government to move the hospital under the authority of the Central Government, to ensure staff allocation,” Unamboowe said.

The Tellippalai Trail Cancer Hospital is modern, clean and far more spacious than many state-run hospitals around the country. As patients await their turn at clinics and various treatment units nothing appears to be out of the ordinary. But behind this facade is the story of doctors struggling to cope with the influx of patients due to a severe shortage of medical officers dedicated to the unit. However despite their struggles to date, the doctors have not let the issues affect patient care, they claim.

But it was the recent decision by the Government Medical Officers Association (GMOA) to initiate trade union action against the refusal by the Medical Superintendent of the Base Hospital Point Pedro to release one doctor in accordance with the annual transfer orders so that the doctor could then be transferred to the Tellippalai Trail Cancer Hospital that finally revealed the tough circumstances faced by the Medical officers of Tellippalai. Many doctors serving at the unit currently have been working at the Jaffna Oncology unit for a number of years, some from even prior to the new hospital being established in Tellippalai.

According to medical officers at Tellipalai, unlike the Maharagama Apeksha Cancer hospital where many medical officers opt to transfer, attracting medical officers to the Tellippalai Trail Cancer Hospital is near impossible. The hospital has a bad reputation about its tough working conditions. Doctors working at the hospital cannot get transfers themselves, since no doctors are available to transfer and relieve them. In fact, in the last four years, six doctors have resigned from the service due to stress-related issues caused by the increased workload with no relief in the form of more staffing even in sight. Not able to even secure a transfer out, many had opted to resign altogether.

Feeling that she has struggled long enough, Dr Yoganathan has also finally applied for a transfer. But while her name now appears on the 2018 annual transfer orders list, she wonders if she will be able to secure a transfer as so far no doctors have requested to be appointed to the Tellippalai Cancer Hospital.

While the hospital collectively needs 18 medical officers to run at its full capacity, currently only nine doctors are available out of which four are also now currently awaiting their transfer orders.

Already the cancer mobile clinic in Vavuniya has been halted due to the lack of staff. Dr Nishanthan Sunthareswaran, another medical officer attached to the hospital explained that the lack of staff also increases waiting times at the clinics. “Some patients come from Trincomalee for example in the early morning and will have to wait for long hours to receive treatment if this situation continues,” he says.

Due to the struggles at the Cancer Hospital, one new medical officer they believe can make a large contribution to easing the burden on those already serving.

According to Dr Gandeepan Thangarajah, Northern Coordinator for the GMOA, many doctors opt to stay in better city-based hospitals leaving those in more rural hospitals to continue working in tough conditions.

“This is not fair and therefore we will enforce the annual transfer orders,” he said adding that Tellippalai was not alone when it comes to shortages of medical officers.