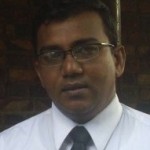 The definitions given to the word militarization in dictionaries state it is an “act of assembling and putting readiness for war or other emergency”.

When the word militarization is defined in the context of politics it gives a more complicated and terrified meaning as much as a tool capable of dismantling political, administrative and social structures of a society.

Apart from the annual budgetary allocations to the military in comparison with budgets of other important sectors of the country, there are several other indicators to identify a militarized society, such as;

a)    The subservient role of the military is converted to a stake holder of the State;

b)    The effort to glorify the military and its personnel;

The subservient role of the military is converted to a stake holder of the State;

The Sri Lankan military had throughout performed a subservient role and its mandate was very clearly restricted to matters relating to national security.   However, there was huge propaganda machinery launched to boost the image of the military and to attract the public for the employment in military sector after 2005. Programmes like “Api Venuven Api” were introduced directly under the Supervision the Secretary to the Ministry of Defence to achieve the afore mentioned publicity campaign.

In addition to the glorification of the military through media campaigns, retired military personnel were placed in key positions in the State during the period of war and huge publicity was given to those appointments.

The image of the military has been inflated and simultaneously the mindset of the public have been nourished with nationalist ideas and interests during the period of the war and afterwards. A belief was created as a result in the society that the military was far superior than other sectors of the country. 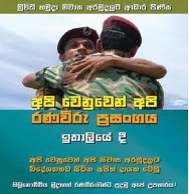 a)    Playing a role in the administration of the State

It is common now that military personnel are employed in key positions of the State. It implies that the State has more faith in the military than the officers of the conventional services.

It is important to note that most of the military personnel who are employed in services such as the Foreign Service, Administrative Service, and Engineering Service are appointed to other State entities while they are on active military service.

The other important factor is that most of the above mentioned military officers played a key role in the 4th Eelam War and there is now a serious discussion nationally and internationally about the last phase of the 4th Eelam War, where accusations have been leveled against the Sri Lanka military that they have committed war crimes during the last phase of the war. However, the Government of Sri Lanka (GOSL) is still keeping them as its representatives for the world disregarding or ignoring the said allegations of war crimes, which clearly demonstrates that the GOSL is heavily dependent on the military and the non compromising attitude of the government with regard to the military.

The same situation can also be seen in the civil administration, where military persons have been placed in key administrative positions. An example is the Governor of the Northern Province who is a retired Major General. He is still being kept in his office by the President despite protests by the provincial government elected from an election. The basis for the demand of the ruling party TNA is that the province and the Jaffna peninsula is heavily militarized due to heavy military concentration in the area and that the civil administration always takes place under the supervision of the military command which causes an oppression of the ethnic minority.

Considering the totality of the sequence of events, the overall picture is that the country is moving towards a more military style administration rather than a civil democracy.

a)    Playing a role in economy of the State(Mil-Economy)

The countries heavily dependent on the military recognize the military as another stake holder of the economy and the military also plays a significant role in the country’s economy. 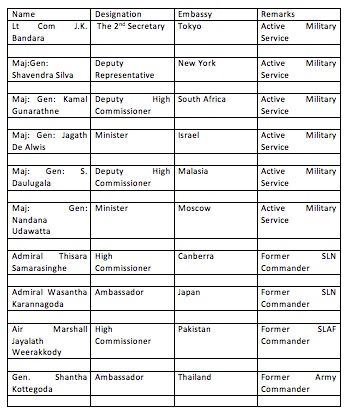 After defeating the LTTE, the manpower and other resources of the Sri Lankan military have been used in various activities; those have been called as development activities. The manpower of the military and its civil engineering and architectural resources have gradually become a key component of town planning and other activities. Initially the sole reason for getting the services of the military was cheap labour and discipline. However, the said intention has now changed, with both the service provider and the master now taking a deferent context with regard to their capabilities.

When the military becomes a competitor in the market with privileges and other reliefs granted by the State, serious issues arise in respect to maintaining the balance of other State enterprises and the private sector enterprises.

The following areas should seriously be considered when the military is given a slot in the economy as a stake holder;

a)    Whether the military is subjected to tax structures of the country;

b)     Whether the commercial ventures run by military are bounded by the  red tapes imposed by the State in respect of similar kind of businesses;

If the Military is freed from the aforesaid areas with other benefits and privileges from the State, the Military has the power to change the balance of the industry.

Therefore the intervention of the military in some business industries such as hotel and restaurant industries will one day cause a serious threat to small scale and midscale sectors of the industry.

The difference between the US example and ours is that a majority of the US projects are limited to military related businesses and it does not affect the smooth functions of civil life or their livelihood. In our case, the military is gradually taking over the civil establishment of the country utilizing its enormous resources with the blessings of the State, which would definitely create a serious impact on the livelihood of the citizens.

The most serious part of the military economy is the invasion into civil life through economic channels.

It is better to explain this topic with an example. Soon after the war the members of the Civil Defense Force (CDF) were deployed into the retail business of selling vegetables and other agricultural products that had been grown in the farms belonging to the military in major cities and towns of the country. The visible motive on the surface seems to be to provide fresh agricultural products to the public for a cheaper rate. Several soldiers attached to CDF with military fatigues used to sell products in the heart of the town and since it was a new concept they managed to attract the general public to the business.

However a thorough analysis shows that it was not such a simple and bona fide act of the military. The action had directly challenged the local trader and his business and had created a confrontation between the trader and the common man. It had managed to place more faith on the military as a supporter of their daily life.

The following issues had arisen with the said business ventures of the military, though those were not brought to the notice of the authorities;

c)     Products of the CDF mainly came from farms belonging to the military without third party involvement in the trade, where as normal retail dealers get their products through third parties and has to place a higher price for their goods as a result;

The Glorification of the Military and its personnel

During the time the LTTE was in existence, a major allegation raised against them was cultivating a military mentality among Tamil citizens, especially among the children and youths with the aim of dragging them to a war. 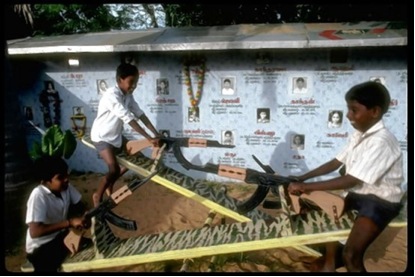 The same strategy is now being used by the State to cultivate a military mentality in the minds of the public.  The State has been utilizing old and decommissioned military hardware with the intention of creating an attraction towards the military. The intention of the State is clearly reflected in the recently commissioned Nugegoda Wet Park, where an armoured car is installed for the pleasure of the public.(Photograph No2)

With the defeat of the LTTE, the military has acquired enormous power in society and the public was trained to think that the military is beyond the common man.  The State has openly promoted the quality of life of military personnel and their families introducing many welfare programmes to the military with enormous publicity and propaganda. The following projects have been launched in support of the military, which clearly show that the placement of the military in the society is very much higher than in the other sectors of the country;

It is important to mention that while the military is being glorified, the authorities have now started a process to introduce the military discipline and nationalism to civil life. It was introduced by giving military training to the university students, which decision has been challenged in the Supreme Court. However it was not successful. 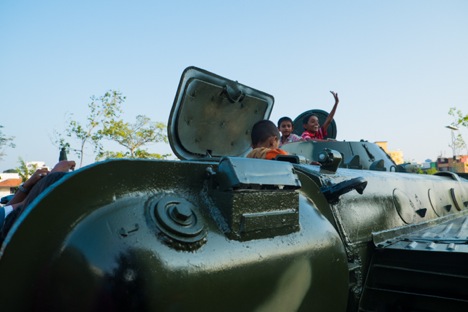 The training course of the said military training programme consists of Physical Training, Theory and other practical subjects. This course is used to introduce nationalist ideologies and pro government mentality into the minds of the participants. As an example, in one training session, the participants were asked to write a comparison about King Dutugemunu and President Mahinda Rajapaksha.

The 2nd phase of the process is providing military training to school principals and commission them with military ranks.

The reason given by the State for providing military training to civilians is to create discipline in the society. The existing social discipline in the society has existed with social values, traditions, operation of laws and regulations. The military discipline is totally different from social discipline, where it is basically confined to the command and respect to the command and no space is given for dissent or any other opposition.  Therefore, the process of disciplining the society through military means is to create an illogical master friendly society.

Considering the above mentioned circumstances, we are now in a process of becoming militarized in all aspects and the State is smoothly placing the military beyond all other layers of the society and giving it supremacy of the society, which is a systematic move to place the military with the power to disable the public power.