Just like in Burma, the recent years have seen the unrest between the Buddhist majority and the Muslim minority on the upswing in Sri Lanka. Galagoda Aththe Gnanasara, general secr­etary of the Sri Lankan ultra-nationalist Buddhist organisation Bodu Bala Sena (BBS)—Sinhalese for Buddhist Power Force—actually claims to perceive an international Islamic conspiracy that aims at marginalising the Buddhists in Sri Lanka. He believes his organisation can unite all the Buddhists of the island and turn them into a nationalist force, thus countering this ‘foreseen’ Islamic threat. He has been widely accused of being the mastermind of many anti-Muslim riots in Sri Lanka and gained notoriety for publicly avowing his racist inclinations. He answers a series of questions posed to him by Pranay Sharma.

After years of ethnic strife, Sri Lanka is trying its best to become used to peace but you seem determined to break it. Why?

This is a completely wrong interpretation. As an organ­isation, we are working towards peace. The Bodu Bala Sena is working in the path of Lord Buddha. We don’t believe in violence nor in inhuman activities.

Sri Lanka is a Buddhist-majority country that also encourages people from other religions to be part of the nation. Do you see a problem with that?

No, we don’t have a problem with that. We value and believe in diversity. Whether you are a Buddhist, a Hindu or a Tamil—you will enjoy the same equal rights. Our concern is more about a number of international elements that are working at destroying the peaceful social fabric of our country. Sinhalas or Buddhists are forming a majority in the country, but we also live in a global society that is structured by global funding, global politics and also global terro­rism—all of which now work against global minorities.

When you say ‘global’, precisely which countries do you have in mind?

It is hard to say but most of them are from the Middle East and Saudi Arabia. These are the countries that fund Muslim extremist groups here. There are some countries that also promote fundamentalist Christian groups. I don’t think it is something we should allow to happen. These are attempts to destroy the culture of our country.

What does Bodu Bala Sena stand for?

It stands for forces of Buddhist power. It is to unite all forces that believe in Buddhism. It is to build them up as a nationalist force to protect the Buddhist and Sinhalese rights.

But you have also gone on record saying that you are racist and that you don’t mind being called so?

We are saying so because some people are calling us racists. We don’t mind because we are only working towards prote­cting our nation. We don’t promote racism nor think that all minorities should leave this country. But the real meaning seems to get lost in translation and taken out of its context. We are not promoting racism. We are only fighting to protect our race. That does not mean racism.

You claim the Muslim minority in Sri Lanka is posing a threat to the majority Buddhist population in the country. But is that really possible and in what way have they posed a threat?

Definitely, they are posing a threat not only to Sri Lanka, but to India as well.

But you do agree that, in terms of numbers, they are a much smaller group?

Yes, they are a minority in number but if you look at their economic power and their international network, they are not a minority. We are aware that the majority of Muslims are innocent, but once they come under the influence of Muslim extremists, they can easily fall into smuggling, illegal weapon handling and even terrorist activities.

Do you take responsibility for the communal violence that took place recently in the Sri Lankan coastal districts of Aluthgama and Beruwala, where victims were mostly ordinary Muslims?

Definitely not. I would request you to go on our website: there is a video that clearly shows how a peaceful gathering was interrupted by Muslim extremists throwing stones at innocent women and children walking down the street. 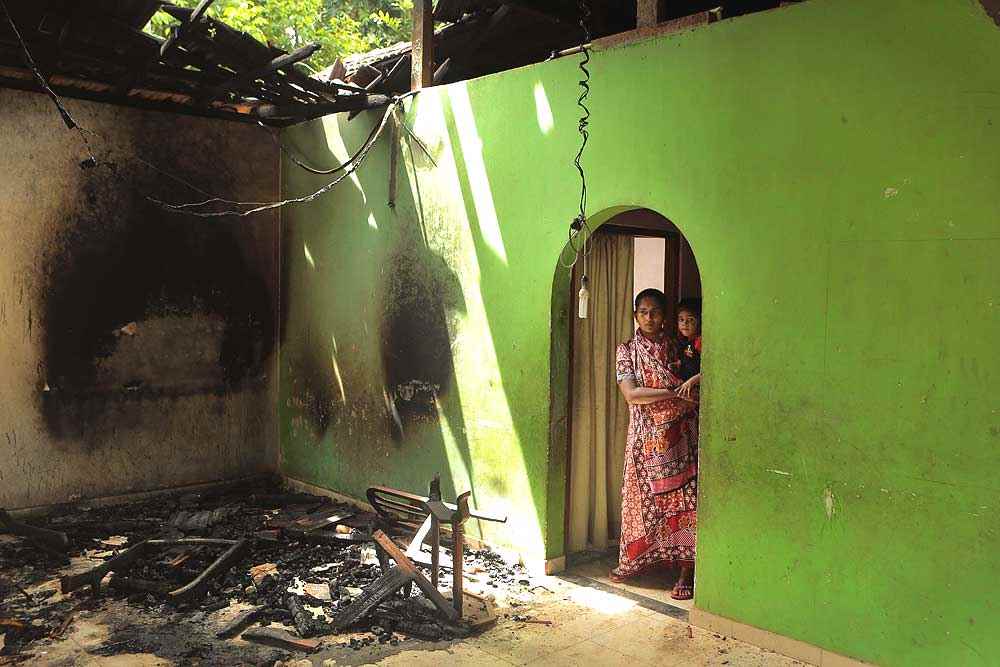 What about other religious groups, do they also pose a threat to the Buddhists?

There are very small groups of Christian fundamentalists. But they are not only a threat to Buddhists; they are also a danger to Hindus, moderate Christians and Catholics as well.

Being a Buddhist monk, you take pride in being a religious extremist. Does it not go against the preaching of Gautama Buddha?

No, I don’t think that is true. We are not extremists. In meetings, we may use some words emotionally, but I don’t think they are hate speeches. We work closely with some moderate Muslim groups. We started talking about Muslim extremism only after reports were issued to us by some of these groups. Only then we realised that there is an unseen, unknown Muslim extremism working in Sri Lanka.

What is your relation with President Mahinda Rajapakse? Do you think you are becoming an embarrassment for him?

Sometimes, what we say may be beneficial to him and, at other times, it may be not. Our focus is not to embarrass or make anybody uncomfortable. But, through our preaching, we want to give the necessary protection to our religion.

Most Sri Lankan parties are very critical of you and there is a growing demand for your arrest. Why?

If they think that arresting me is going to solve the entire problem, then I am ready to go to jail. I have no issue with that. But if I have not participated in any criminal activity, how can they put me in jail?

Are they not arresting you because they have not found anything against you or because you happen to be close to the ruling party?

The US government has revoked your visa. Does it worry you that you are coming to national and international notice for all the wrong reasons?

I don’t worry so much about this because an American visa is not so important to me. Let the Americans do what they want, they have the right to do so. But I think the US should understand Sri Lanka better. We wish they had got in touch with us before coming out with their views. They are only listening to one side of the story. They should talk to all the relevant parties before drawing any conclusions.

Will there be more violence in the coming days?

I don’t think this violence will continue—though we never know. The violence is not a new phenomenon. In 2009, this Muslim group had attacked a mosque and killed two people. However, this group is only present in that particular area and I don’t think there will be any problem elsewhere. Buddhists are very peaceful people and these problems are created only by such Muslims. They set fire to their own mosque and kill their own people who don’t follow their instructions. This particular area was a hot spot for the past five years and there were some incidents of viol­ence almost every month.

So all the problems of violence are caused by this particular Muslim group and Bodu Bala Sena has nothing to do with it?

Definitely. We should not be blamed. We have not thrown a single stone at anybody. But, these groups are spreading a lot of rumours; they are very powe­rful, they own some media houses and they have a lot of contacts. But we have tried to be very open about what we do.

Why are they against you?

Because they know we had exposed their plans and it has now become difficult for them to carry out their strategic planning since our intervention.

And what strategic plans have you exposed?

They tried to issue halal certificates. We are not against halal, but they wanted all Sinhalese business people to have these certificates for their products. They managed to get all the hotels, restaurants and others to buy these halal certificates and made a lot of money through them. They are trying to destroy Sinhalese and Buddhist food habits and culture by replacing them with halal culture. That is what we tried to stop and that is the reason why they are against us.

(Gnanasara’s colleague and spokesman Dilantha Withanage helped with the translation.)