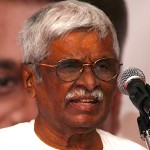 An Indian Tamil origin born in South Africa to a poor family. She rose to the heights of Judicial service as the first coloured supreme court Judge.

While in service she exhibited courage fearlessness and forthrightness without any favour or fervour. She kept vigilance on all the members of Human Rights Council and monitored the rowdy states which indulged in Human Rights violations. During her tenure of service Syria and Sri Lanka found themselves in the docks of accused. The war crimes and crimes against Humanity committed by thesee states prompted the setting up of UN independant commission of inquiry. Preliminary reports and findings justified further investigations which Navanethem Pillay promptly initiated. And they are currently proceeding with urgency causing worries to Sri Lanka. Her bold decisions in these matters have incensed the Syrian and Sri Lankan dictatorial regimes who in desperation have resorted to mud slinging and slandering.

Syria called her “A Tamil Tigress” so also Sri Lanka which accused her of having received monetary benefits from the LTTE which is no more existing according to Sri Lanka. Sri Lanka also resorted to disgraceful and disgusting behaviour with one minister proposing marriage to her.

These antics did neither deter nor disturb her from carrying out her entrusted duties and functions. She never hesitated to call spade a spade.

In this respect during her recent months of service, she condemned the Islamic state terrorists for their inhuman killings in Iraq and Syria and also Israel which went on a spree of destruction and killings of civilians in Gaza Strip.

She defended the rights of civilians without any bias race or religion. She has thus left an indeliable impression on the Human Rights Council and also established precedents for her successors to follow her bold and impartial path.

Her exposure of Sri Lankan crimes and atrocities again the ethnic Tamils has given for the war victims a ray of hope for justice, accountability and solace. We wish her all the success in her future endeavours and hope she will continue her crusade against Human Rights abusers worldwide.

We also seize this opportunity to welcome Mr Prince Zeid Ra’ad Zeid Al- Hussein, the new chief of Human Rights Council to work more vigrously in carrying out the functions of Commissioner and the Council while hauling up rogue states and protecting the citizens world wide.

As a seasoned diplomat championing Human Rights, there is no doubt Prince Hussein will live up to the expectations and stand firm against the past Human Rights violators and prevent future violations.