Sri Lanka should understand the fact that international law is not like the present judiciary in Sri Lanka. Whether the HCHR is Louis Arbour, Navanethem Pillay or Prince Zeid Ra’ad Zeid Al-Hussein, she or he will not work on the basis of their own ethnic identity. These human rights VVIPs look at every global situation through the lens of international law.

Louis Arbour was the first UN HCHR to bring Sri Lanka’s human rights violations to the attention of the international community.  For this reason, Sri Lanka slandered her.

Then it was  Navanethem Pillay’s turn.

Sri Lankan officials are looking for venues where they can butter up the new HCHR. In fact they did the same with Navanethem Pillay. When she assumed her duties on 1st September 2008, Sri Lanka government representatives were the very first government team to meet her – within four days in office on 5th September 2008. They took photographs for their publicity. But her adherence to the standards of international law ensured that Navanethem Pillay never got caught to their buttering up. She never ignored the human rights violations, crimes against humanity and the genocide continuing in Sri Lanka. 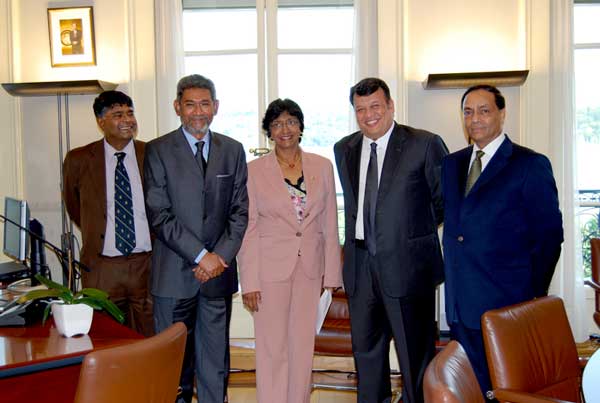 On 1st September 2014, the Sri Lankan government spokesman Keheliya Rambukwella told reporters: “Pillay was biased and made some unfair decisions on Sri Lanka and the Government hopes her replacement will take note of her actions and be fair in his decision.

He also said that “the Government will deal with the new UN High Commissioner for Human Rights while the External Affairs Ministry will decide if he should be invited to Sri Lanka.”  Whatever the Sri Lankan spokesman says, civil society expected Sri Lankan government representatives to meet the new High Commissioner, to brief him about their dirty work. “Either you agree with us or we will slander you as well”.

Sri Lanka howled that Navanethem Pillay was “biased and made some unfair decisions”! If that were the case, the UN Secretary General, the UN General Assembly, the UN Security Council and also the UN Human Rights Council all exist to supervise and if she had done anything wrong, they would have taken action. So it is obvious that Sri Lanka is telling tales. Not only  Navanethem Pillay, but many other examples too, prove that when any VVIP doesn’t agree with, or support, Sri Lankan government atrocities and behaviour, they get slandered.

No-one has forgotten what happened to the

Sri Lankan officials and ambassadors live like “frogs in a well”. The new HCHR is not going to work only on Sri Lanka. His responsibilities encompass the promotion and protection of human rights globally.

However Sri Lanka clearly does not understand or does not want to concede that the business of passing a resolution in the UN Human Rights Council was the task of UN member states. It has nothing to do with neither HCHR  Navanethem Pillay nor any other UN Officials.

There is much evidence to prove that the Sri Lanka government is attempting to dictate to the new HCHR, that he must work in their favour! It is well known that otherwise, his name will also be included in the list of those slandered.

Excerpts from the Colombo media show expectations demanded of the new UN HCHR:

“Sri Lanka has maintained excellent relations with Middle-Eastern countries in general and with Jordan in particular. Whether this will influence Hussein remain to be seen, especially in the context of the current simmering religious tensions in the country.” – Daily Mirror, 19 June 2014

The mouthpiece of the Sri Lankan government, the “Sunday Observer”, said the following about the new UN HCHR.

“It is earnestly hoped that the new United Nations Human Rights Commission (UNHRC) chief would act in an impartial and transparent manner while respecting the sovereignty and territorial integrity of all UN member countries.” –  ‘Sunday Observer’ 24/08/2014)

An article appearing in Foreignpolicy.com about the new HCHR, said the following. “Zeid has earned that trust through many years of close interaction with U.S. interlocutors from both parties and the Congress. He is a firm fixture on the global diplomatic scene, having spent the last 14 years serving alternately as his country’s ambassador to the U.N., to the United States, and to the U.N. once again. Zeid has chaired the convention of States Parties to the International Criminal Court, and led a hard-hitting commission that addressed sexual abuses committed by U.N. peacekeepers serving in numerous conflict zones. Still young at 50, charismatic and a royal to boot, there’s no question Zeid will be received at the highest levels by governments worldwide.” – Foreignpolicy.com

Amanpour asked how she has dealt with such attacks and criticisms over the years.

“I am supremely confident that I speak with moral authority,” the High Commissioner said.

“These comments do not disturb me at all. There are still the other 190-odd countries who appreciate the work being done by my office because we assist them. They know the importance of investigating serious incidents. And so we continue with our work.”

A farewell was organised for Navanethem Pillay by NGOs in Geneva on 5th August. Some Tamils attending this farewell from Paris were well manipulated by Rajapaksa’s government through Douglas Devananda’s agents in Europe. News about this farewell was first published in the most racist Sinhala print media, published by the Upali group. The Rajapaksas’ supporter – a Sinhala racist and some Singhalese drivers working for various embassies in Geneva were behind this news item.

Last March, while this Sinhala racist and his friends, some Singhalese drivers, were walking towards the Press club in Geneva, without realizing to whom they were talking, they  told a VVIP that ‘Tamils in Sri Lanka are from India, now is the right time for them to move to Tamil Nadu’. I thank the Dwarf and his friends for this big favour. What they said was well recorded and has gone into the right system, acknowledged as part of the thinking of the extreme Singhalese.