The Asian Human Rights Commission (AHRC) has in a statement issued regarding the brutal assault of a sex worker by a Policeman attached to the Rathnapura Police, has stated that the responsibility of such appalling behavior by the Police should be borne by the government. 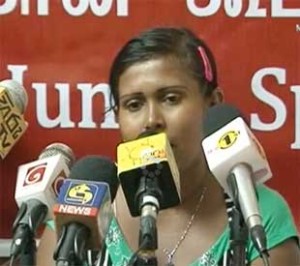 In the statement that was issued today, the AHRC has pointed out that by dismantling the 17 Amendment; this government destroyed the only serious attempt made to restore discipline in the public service, particularly the Police service and therefore, the government should bear the blame for the shocking behavior displayed by certain police officials.

They have gone on to point out that the 17th Amendment was annulled in order to ensure the prevention of free and fair elections and have added that presently in Sri Lanka, the question of what is legal and illegal is no longer an issue that matters anymore.

The AHRC has also criticized the Police Spokesman’s reaction to the video that was circulating on social and mainstream media that had captured the assault of the sex worker by the Policeman. They have referred to the various statements he made on the incident that were contrary to each other and the manner in which he repeatedly stated that the victimized woman was missing and therefore a statement cannot be obtained by her, although she concurrently began revealing her ordeal in public through media.

“What is even more shocking is the manner in which several Police officers including HQI treated this woman where they attempted to coerce her into remaining silent and even tried to bribe her with Rs. 3000 in order for her to not raise an issue about the  assault,” the AHRC states.

They have gone on to point out that it is unfortunate that despite enormous publicity, with photographic evidence of the brutal police assault available, to date the police sergeant in question has not been arrested or charged with a criminal offence

“The offense falls under CAT Act no: 22 of 1994 – that any public officer who commits an act of torture can be charged with an offense punishable with up to seven years rigorous imprisonment and or a Rs. 10,000 fine,” the AHRC has further noted while adding however that the Police as well as the Attorney General’s Department has connived not to file charges under the Torture Act despite a large body of evidence being revealed on incidents of torture committed by Police officers.