OTTAWA (Reuters) – At least one gunman entered Canada’s parliament buildings on Wednesday and many shots were fired just outside the room where Prime Minister Stephen Harper was addressing a meeting of legislators.

Harper was safely removed from the building but parliament was locked down. Eyewitnesses said at least 30 shots were fired in dramatic scenes in the heart of the Canadian capital.

“PM (Harper) was addressing caucus, then a huge boom, followed by rat-a-tat shots. We all scattered. It was clearly right outside our caucus door,” Treasury Board Minister Tony Clement said.

A spokesman for Harper said: “While the prime minister stated that facts are still being gathered, he condemned this despicable attack.”

The suspected gunman was shot dead inside the parliament building, Ottawa police said.

Minutes before the shooting there, a soldier had been shot and fatally wounded at the nearby National War Memorial in Ottawa.

But the incidents, shocking in Canada’s normally tranquil capital, were not over.

Ottawa police were searching for more suspects near the war memorial in central Ottawa, and on nearby Parliament Hill, a police spokesman said. Residents were warned to stay away from downtown Ottawa.

Dramatic video footage posted by the Globe and Mail newspaper showed police with guns drawn inside the main parliament building. At least a dozen loud bangs can be heard on the clip, echoing through the hallway. 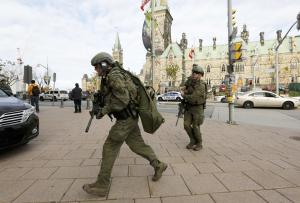 “All the details are not in, but the sergeant-at-arms, a former Mountie, is the one that engaged the gunman, or one of them at least, and stopped this,” Fantino said.

Canadian cabinet minister Jason Kenney said a guard in parliament buildings had also been wounded in the incident.

There was no word yet on the identity of any suspect or suspects or of any motive for the shooting.

It was also unclear whether there was any connection to an attack on Monday when an Islamic convert ran down two Canadian soldiers with his car, killing one, near Montreal, before being shot dead by police in the first fatal attack on Canadian soil tied to Islamic militants.

Canada announced this month it was joining the battle against Islamic State fighters who have taken over parts of Iraq and Syria.

The attacks took place as the Canadian government prepared to boost the powers of its spy agency, the Canadian Security Intelligence Service. Public Safety Minister Stephen Blaney said last Thursday the new legislation would let the agency track and investigate potential terrorists when they travel abroad and ultimately prosecute them.

As the drama in Ottawa unfolded, police in dark bulletproof vests and carrying automatic rifles flooded the streets near parliament. 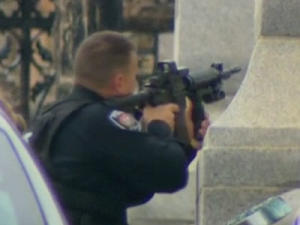 Some took cover behind vehicles and shouted to people to clear the area, saying: “We do not have the suspect in custody. You are in danger here.”

Several police cars were parked on the lawns outside the parliament buildings. Small groups of police could be seen sheltering behind at least two cars.

Members of parliament were told to lock or barricade themselves in their offices, and stay away from the windows.

At the time of the shooting the opposition New Democrats were holding their weekly caucus meeting in parliament’s Centre Block, where the shooting took place. A tweeted picture sent from the room showed a pile of chairs jammed up against the main door to prevent anyone from entering.

Police told people in downtown Ottawa to stay away from windows and off roofs.

The soldier who died in the shooting was taken into an ambulance in which medical personnel could be seen giving him cardio-pulmonary resuscitation. CBC News reported that he was a reservist who had been serving in Hamilton, Ontario.

In Washington, a White House official said U.S. President Barack Obama had been briefed on the situation. He said the United States had offered assistance to Canada.

Mass shootings are relatively rare in Canada, which has stricter gun laws than the United States. Compared with Capitol Hill in Washington, security on Parliament Hill is also fairly low key. Anybody could walk right up to the front door of parliament’s Centre Block with arms and explosives without being challenged before entering the front door, where a few guards check accreditation.

A construction worker who was on the scene in Ottawa when the shooting began told Reuters he heard a gunshot, and then saw a man with a scarf over his face running towards parliament.

“He was wearing blue pants and a black jacket and he had a double barreled shotgun and he ran up the side of this building here and hijacked a car at gunpoint,” construction worker Scott Walsh told Reuters.

The driver got out safely, then the man drove the car to the Centre Block on Parliament Hill, where construction work is underway, Walsh said.

The suspected gunman rushed past a woman with a child in a stroller, who ran away screaming. He did not attack the woman or child, he said.

Centre Block is the main building on Parliament Hill, a sprawling complex of buildings and open space in downtown Ottawa. It contains the House of Commons and Senate chambers as well as the offices of some members of parliament, senators, and senior administration for both legislative houses.

One member of parliament, Mark Strahl, tweeted from inside parliament: “Very tense situation in Ottawa this morning. Multiple gun shots fired outside of our caucus room. I am safe and in lockdown. Unbelievable.”

The Canadian military closed its bases across the country following the events in Ottawa, CBC TV said.