Enemies of the President’s Promise Chapter 2

During the conflict period, relations with India had been handled not by the Foreign Ministry, but by three trusted confidantes of the President. These were his Secretary, Lalith Weeratunge, and two of his brothers, Gotabaya Rajapaksa and Basil Rajapaksa. These two, both younger than the President, were neither of them Ministers at the time (as opposed to the oldest brother, Chamal, who was a long standing member of Parliament and a senior Minister). It was the two younger brothers however who were considered the most powerful members of the government. Gotabaya was virtually a Minister in fact, since he was Secretary to the Ministry of Defence, with the President being the Minister, and leaving most of its running to him.

Basil at the time was a Member of Parliament, but his executive responsibilities were informal, arising from his chairing the Task Forces that were responsible for reconstruction of the East (which had been retaken from the Tigers fully by 2007) and later of the North. He was an extremely hard worker, and had managed, well before the Tigers were destroyed, to have succeeded in bringing life in the East back to relative normality. His technique had been massive infrastructural development, and the connectivity that was restored to the East had enabled its full involvement in the economic life of the country. 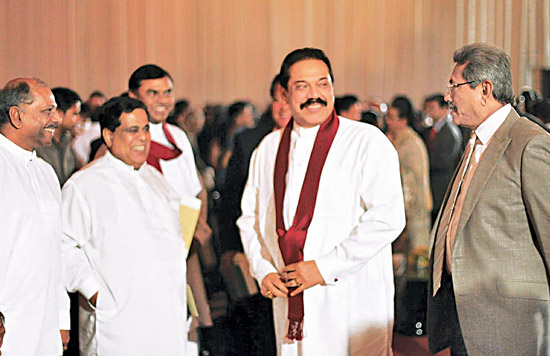 Late in 2008 he was appointed to chair what was termed a Presidential Task Force for the North. This was expected initially to make arrangements for the care of the internally displaced, most of whom were being held hostage by the Tigers at that time. Over the next six months they were driven into more and more restricted areas in terms of the Tiger strategy of using them as a human shield. This made the task of the military extremely difficult, but in the end, when the Tigers were destroyed, nearly 300,000 civilians were rescued, and taken to what were termed Welfare Centres.

Though there were complaints at the time about conditions in the camps, they were comparatively speaking much better than the lot of most displaced persons in such conflicts. Health services were excellent, and within a few days mortality figures had stabilized. Food supply and distribution was competently handled, and soon enough educational services too were made available.

Still, there had been much confusion initially, and this contributed to the feeling that government had been callous. More serious was the charge that government had wanted to keep the displaced in what were termed internment camps, and did not wish them to be resettled soon in their original places of residence.

Changing the demography of the North may have been the plan of a few people in government, and in particular the Army Commander, who had wanted to increase the size of the army when the war ended, probably because of a belief that Israeli type settlements were the best way of preventing future agitation. But this was certainly not the view of the President, who from the start urged swift resettlement, and hoped that the fertile land of the North would soon provide excellent harvests. And Basil Rajapaksa certainly wished to expedite resettlement, as I found when I once wrote to him suggesting that this was proceeding too slowly.

This was in August 2009, three months after the conclusion of the war, and he called me up and sounded extremely indignant. He declared that he had said he would perform the bulk of resettlement in six months, and he intended to do this, give or take a month or two. He had done a similar task in the East, and I should remember that a commitment of six months did not mean half in three. In fact he started the resettlement soon after, though there was a hiccup, in that many of those sent away from the main Welfare Centre at Manik Farm in Vavuniya were then held in Centres in the District Capitals through which they had to transit.

I was in Geneva at the time, at the September 2009 session of the Human Rights Council, and for a moment I wondered whether the allegations that were being flung around, that we had started the Resettlement to pull the wool over the eyes of the Council, were true. Basil it turned out was nowhere to be found, a practice he often engaged in when upset, going back to the United States where he had been settled when his brother was elected President.

However Jeevan Thiagarajah, head of the Consortium of Humanitarian Agencies, that had worked very positively with the government, went up to Jaffna to check, and informed me that the Special Forces Commanders in the Districts had been asked to subject those being resettled to another security check. But they assured him that they proposed to do this very cursorily, and would send them to their places of habitation within a day or two. What was left unsaid was who had ordered the second check, but I assumed this was Sarath Fonseka, in pursuit of his own agenda – and this was confirmed by the irritation he was later to express in writing to the President, about the Resettlement programme going ahead more quickly than he had advised. Basil, I realized, had felt frustrated, and gone away, but his intentions were carried out by the generals in the field, who were on the whole much more enlightened than Fonseka.

Basil then came back, and did a great job about swift resettlement. But, despite his efficiency, and his sincerity, there was a sense in which his original plans had contributed to the belief that the Welfare Centres, as he termed them, were indeed meant to be Internment Camps. The problem was that, when towards the end of 2008 he began to make plans, he engaged in what was common practice with him, namely a grandiose building programme which had several purposes. He unveiled proposals for massive constructions, which included schools and places of worship and hospitals. In addition to the assistance he hoped to get to fund all this, I believe he also thought it would be an opportunity to build some lasting structures for the area.

I was Secretary at the time to the Ministry of Disaster Management and Human Rights, which had the task of coordinating aid programmes for the displaced. The Ministry was therefore initially involved in meetings with donors, and I was present when the blueprints were presented, to general incredulity. What was also clear was that Basil had not thought things through properly, because when he spoke about these at the next meeting of the Coordinating Committee for Humanitarian Assistance, which my Minister chaired, the pictures he used to illustrate the plans were taken from a booklet that my office had prepared. This was about a fairly limited project we implemented called Confidence Building and Stabilization Measures, and had involved some excellent work by the staff we had hired to build up agriculture in the very small camps that were in place for the few who had managed to escape the Tigers. But to have replicated this on the scale Basil envisaged would have been impossible.

A few months then were spent in Cloud Cuckoo Land, while the more critical agencies used the grandiose plans to suggest that we wanted to keep the displaced incarcerated for a long time. Work on preparing shelters in Manik Farm, the site near Vavuniya that had been selected to house the displaced, proceeded slowly, in part perhaps because government had no idea about the numbers still held by the Tigers. While it is possible that government deliberately used low figures, the general impression I had was that they thought the figures that were claimed were exaggerated, given the Tiger propensity to use rations sent for the displaced for their own purposes.

When then in April well over 100,000 persons escaped, government was at a loss. It was only the hasty appointment of the then Chief of Staff of the Army, General Chandrasiri, as the Competent Authority, that saved the day. Indefatigably energetic, he made sure that land was cleared swiftly, while UNHCR managed to find a large number of appalling but serviceable tents, and soon enough everyone was housed. These escapees were in better physical condition than those who got away at the very end, so that well before the war ended, on May 19th, they were in reasonable condition in Manik Farm. Initially they had been kept in schools in Vavuniya while four more zones were set up at Manik Farm, only two having been prepared in the first third of the year.

Basil by then had lost interest in improving services at Manik Farm, and had embarked on the massive reconstruction programme in the North that he thought the best way of ensuring prosperity and winning hearts and minds. He was also assiduously building up his own image, and the first victim of this was the Ministry of Disaster Management and Human Rights, which had previously coordinated humanitarian assistance. We had a lot of experience in this, as well as understanding of the various national and international agencies involved, but this meant nothing to Basil, who was never happy working with anyone else of similar stature. When we tried as previously to plan for assistance, I received a very summary note from the Secretary to the Task Force basically telling our Ministry to get lost.

Basil’s monopolistic control of resettlement and reconstruction in the North occupied much of his time over the next four years. But perhaps this was not enough, since he was determined to do it all himself, and did not plan comprehensively. In some aspects certainly he did a great job. The North ended up with better roads and more electricity than it had ever had, and compared very favourably with the rest of the country. But he had no idea at all about developing human resources and, as the results of the Northern Province election held in September 2013 showed, his one dimensional efforts were not enough. Clearly the government had failed to win hearts and minds, and instead what was apparent was deep resentment on the part of the Tamils, those who had been resettled as well as the others.

This was understandable and, in formulating a National Reconciliation Policy, what should have been done instead was spelled out by those of us from different ethnic groups and political and non-political backgrounds who had come together in my office. This was after I had been appointed Adviser on Reconciliation to the President, though it soon became clear that he was not interested in my advice, if indeed it got through to him. But the manner in which the group had come together in itself indicated why the way government was proceeding was bound to fail.

The initiative had sprung from a seminar the Consortium of Humanitarian Agencies had arranged on Reconciliation, given that the TNA, the main Tamil political party, had not attended a seminar on Reconciliation held at the Lakshman Kadirgamar Institute for International Relations and Strategic Studies. The most articulate of the TNA Members of Parliament, Mr Sumanthiran, explained that he did not think it made sense for them to attend an event at which they had not been asked to present their point of view.

This made sense, so we thought there should be an opportunity for them to do this, and the seminar provided this. In discussion it was suggested that a formal policy be developed, which is what we did. Sadly I had no response from the President when we sent it in, and I realized after some time spent in knocking my head against that particular brick wall that the Sri Lankan establishment was frightened of conceptualization and clear objectives.