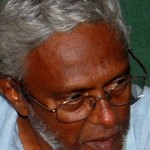 Commenting on the Opposition slogan of “Abolishing the Executive Presidency”, Communist Party boss DEW Gunasekera had said, this is only to muster co-operation amongst them against President Rajapaksa. Yes it is. What’s wrong in choosing a demand or a slogan that most could agree ? The fact that DEW cannot subscribe to it as he chose to support President Rajapaksa for the third time, does not invalidate the opposition efforts in forming a broad alliance. What my ignorance cannot comprehend is, not why the opposition cannot choose a slogan (politically right or wrong) that brings most together, but how even a namesake Communist Party could support a regime that lives with racist criminal activities and lives to loot and plunder an economy.

Much different to DEW, I accept the right of the Opposition to decide what their election promises are. Having accepted that right of the opposition, I retain my right to differ on what they promise for the elections. My differences in terms of political relevance to what we need to address right now. In terms of socio political relevance to turn this country around and move democratically forward. 01. Abolition of the Executive Presidency (EP) – The general explanation that reasons out why it should be abolished was what Rev. Omalpe Sobitha told the Muttiah Park gathering yesterday (12 Nov.) To quote, “…..the executive presidency which, with its unbridled powers is the main cause of undemocratic rule, rampant corruption, breakdown in the law and order situation and the unprecedented crime rate.”[The Island/13 Nov.] Going back 30 years or so in history, no one attributed all this in such scale to the Executive Presidency (EP) rule of Jayawardne, the creator of this “monster”. Talking about constructions in Mahaweli development work, Sarath Muttettuwegama the sole “Left” MP then in parliament accused the Jayawardne government of corruption that was around 10 percent the most. The scales are different and we now talk of 40 percent or more as “kickbacks”. What that would mean is, the provisions were there, for any despot to use. That possibility lies mainly with total impunity, a President enjoys even after retirement or defeat.
The question that needs discussion is, “will the scales be this high in undemocratic rule, rampant corruption, breakdown in the law and order, if the President can be taken to Courts by any concerned citizen”? One may say, “Well, we are not talking of shorter scales, but a total eradication of everything evil under the Executive Presidency”. So goes the justification for abolition of the EP and re introduction of the 17 Amendment. Agreed. We need a paradigm shift, away from all evils under the Rajapaksa regime. Hence the proposal to get back to “parliamentary rule”.

Is this the parliamentary democracy that would cure all ills? Parliamentary rule in two other countries that we could look to, don’t give much hope for remedy. The Westminster parliament, from where we borrowed ours, has not given the British people much peace and stability.

i. They fought an armed rebellion in Ireland for almost a Century from 1916 to 2007 leaving the British parliamentary governments incompetent in resolving the conflict.
ii. Scots now want to leave the UK and have their own sovereign government
iii. They’ve been into major economic ruts in post WW II parliamentary rule and gave into Thatcher as PM who was termed the “Iron Lady”.

The biggest parliamentary democracy in the world in our neighbouring India,

i. is reeking with corruption, without an “Executive Presidency” like ours. 30 million urban people came out on the streets during the last 02 years against mega corruption and created a hero in Anna Hazare.

ii. adopted the Armed Forces Special Powers Act in 1958 to curb “insurgency” in Assam and Manipur. Ever since then, the application of the “special powers” has been steadily spreading. [quote] The “disturbed areas” confined to only the Naga Hills in1950s spread to Lushai Hill in1960s, to Tripura and Imphal valley in 1970s, Brahmaputra valley and Punjab in 1980s and Kashmir valley in 1990s. In these areas, the fundamental rights such as the right to life, the right to a fair trial, the right to remedy and reparation, the right against torture and the right against arbitrary detention (as well as a series of economic, social and cultural rights) have been consistently violated.[unquote – Working Group on Human Rights / New Delhi, 27 August, 2012]

iv. the present Indian Lok Sabha of 543 MPs have 186 with criminal records and pending cases against them. Indian parliamentary democracy is run by them.

v. despite PM Modi’s promise to have a “clean” government, nearly one third of the present 66 Cabinet Ministers are criminals with charges like attempted murder, waging war on the state, criminal intimidation and fraud. Some carry a baggage of over 20 criminal cases.

India has strong safety nets and systems to keep governance clean, like the Right to Information Act, independent Election Commission, declaration of assets, etc. Yet with parliamentary democracy without an Executive President, this is what Indian governance is.

03. Seriousness and responsibility – This is much in want. For two reasons.

One, the promise of initiating the abolition of the EP within 01 month and then adopting a new Constitution within 06 months, even if the parliament can be manipulated to provide the required 2/3rd, is wholly unacceptable. Who would do the final draft that would go before the parliament ? That responsibility has already been taken over by a few self appointed men behind the Colombo centred lobby, who decides everything from time frames to provisions on the single claim they represent the civil society. Constitutions cannot be hoisted on society as such. This society needs a very extensive discourse that should involve professional organisations, trade unions, community based organisations and even elected bodies like the Local Government (LG) bodies and provincial councils.

Two, if as they say, this country has now come to a “point of no return” and a regime change cannot be compromised, then the Common Candidate(s) they are scheming and manipulating to have, should be persons of much integrity and strong track record to have the EP abolished. As they argue, everything else depends on the abolishing of the EP. Why then bring forth CBK who in 1994 October promised in writing to abolish the same EP within 06 months from coming to power and thereafter never ever talked of it ? How serious are these people, when they themselves claim the situation is extremely serious ?

This whole project therefore tend to prove, those who keep making statements and holding press conferences are not serious about abolishing the presidency, but more greedy in getting their hands on State power.

04. Is Abolishing of Executive Presidency and a Common Candidate a nationally felt need ? This seems far from reality. Uva Sinhala Buddhist majority (about 88%) was least interested in any of it, when over 21 percent of the UPFA vote bloc departed and registered a protest vote against MR rule this time at PC elections. They had other serious reasons to leave the Sinhala Buddhist project of the Rajapaksas. They feel insecure, left to be coerced by a local thug who now runs the LG body in their area, with sexual harassment and rape of women and children galloping high, extortions and murder  common and drugs enter the village. This insecure rural life (70%) and the abolition of the EP for them have no relationship.

Abolition of the EP and this Common Candidate issue are mere slogans created in Colombo by a few middle class men at tiny forums attended by a dozen or two, who believe they represent the civil society (where ever it is) and pretend they know best. Most unfortunately, the media in Sri Lanka owned and run by proxies of the regime or by those who do business with the regime, are Colombo city centred and they don’t even know that “news” is not necessarily found in Colombo and with political parties. Thus what the media is after and what they wish to “plant” as news or “breaking news” are statements and briefings by the Colombo groups. Once in the media, we’ve got into the habit of saying they are “national” issues or national needs.

I do agree the EP should be abolished not only for what is generally said, but more because it is an impediment in creating a governing system where power could be devolved and shared with the periphery. That a new governing system should be established through far reaching reforms, accepting that parliamentary system per se is no answer to our problems. That necessity and finding right plug-ins to save democracy goes beyond the capacity of these mediocre efforts around a Common Candidate.

It should turn out as a people’s lobby and will have to address two key areas.

My ignorance thus tells me, this whole campaign to oust the Rajapaksa regime will have to be redefined and redesigned as a people’s reform movement to hold whoever comes to power post elections, wholly responsible in effecting reforms the people decide and the country needs.