Villagers in west Sri Lanka have said they have been surprised and delighted by an unusual rainfall of small fish.

The edible fish fell during a storm and are believed to have been lifted out of a river during a strong wind.

Villagers in the district of Chilaw said they heard something heavy falling and found scores of fish with a total weight of 50kg (75lbs).

It is not the first such incident in Sri Lanka – in 2012, a case of “prawn rain” was recorded in the south.

The most likely cause of this unusual event probably relates to the formation of a tornado. Tornadoes tend to form in areas where large differences in both temperature, humidity and wind speed and direction occur.

Complex meteorological processes result in a rapidly rotating column of air spinning out of the base of storm clouds, often causing huge damage and acting like vacuum cleaners, sucking up any material in their path.

In the Sri Lankan storm, a tornado probably formed over land, drifted over river systems or coastal waters and sucked up light fish that were lifted all the way into the base of the storm cloud. Later the fish were rained out of the cloud.

So why don’t we see similar events occurring over places such as the infamous “Tornado Alley” in the USA?

Tornadoes there usually form well away from any mass expanses of water, reducing the likelihood of any fish being sucked up. The stronger tornadoes also tend to form more frequently across large land masses where huge temperature and humidity differences are more commonplace.

Scientists say that “fish rain” usually occurs when swirling whirlwinds over relatively shallow water develops into waterspouts and sucks in almost anything in the water including fish, eels and even frogs.

The marine life can be carried long distances by buffeting clouds even when the waterspout stops spinning.

Villagers say that the “fish rain shower” took place on Monday with the creatures falling on the village green, roads and roofs.

Some of the fish – each three to five inches (5cm-8cm) in length – were still alive and were put in a buckets of water by villagers who ate them later.

This is the third time this has happened in Sri Lanka, but not from the same area.

In addition to the reported “prawn rain” of 2012 in the south, there was yellow and red “meteor rain” the same year – a weather development that is reportedly still being investigated by US and British scientists.

Fish is a valued commodity in Sri Lanka. 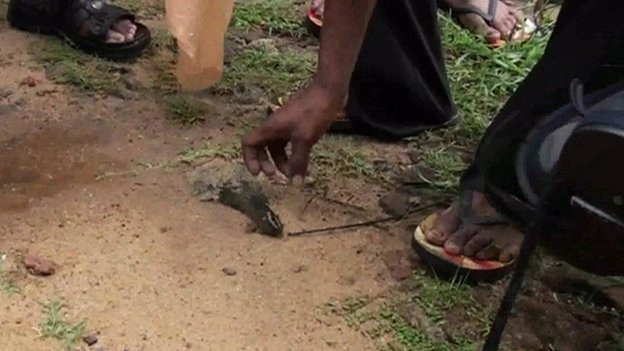