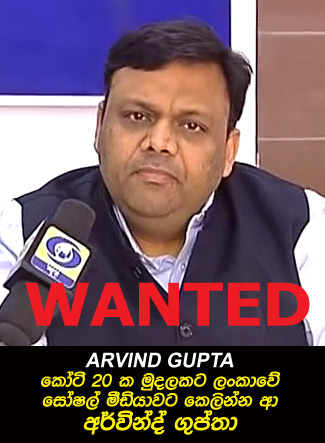 (Lanka-e-News- 2014.Dec.03, 4.40PM) The Medamulana Rajapakses who have already faced defeat at the Presidential elections in the cyber battle, have got down an Indian national to the Temple Trees after paying a sum of Indian Rs. 100 million , based on Lanka e news inside information division reports.
The name of this Indian is Arvind Gupta , who during the elections of Indian Prime Minister Mody , monitored latter’s social network . Gupta had arrived in Sri Lanka along with four others on the 21 st of November , and undertaken the monitoring of the Presidential social network campaign of Mahinda Rajapakse .
Gupta and his team have already begun their operations on the second floor of the President’s office at Temple Trees . Working along with them is a Sri Lankan team. Already , based on the social network monitoring, President Rajapakse is a defeated candidate . Hence , the advice of Gupta and his team to Rajapakse was , via clandestine accounts access the social network, and furnish answers favorable to the moribund government .
In the circumstances , if you discover comments in your social network that are extolling the government, and probe who are those maneuvering and manipulating them , you will realize who is behind them and their phony face book accounts . They are none other than Gupta and his team.
This Gupta team is here not with the knowledge or approval of the Indian government. The contracted payment to them is Ind. Rupees 100 million which in SL currency is over Rs.200 million . 30 % of the contracted amount has already been paid , and it has been remitted to India illegally. It is learnt that by now , the Indian anti corruption squad is getting ready to commence action against Gupta to legally reveal how these monies were obtained.
It may sound strange but it is true , while Gupta is manipulating the social network on the second floor of Temple Trees , the Chinese nationals on the lower floor are engaged in hacking the anti government website social network etc. and debarring them.
Meanwhile websites that were operating for some time doing the sordid biddings of the government via sly and slimy methods ,while masquerading as enemies of the government have now come to the open; they are currently promoting the government’s foul objectives through secret agendas. These websites were banned falsely to give the impression these are anti government websites. At the crucial moments they display their true colors to boost the insidious agendas of the government .
One illustration of these insidious schemes is : the false news reports in those websites that UNP general secretary Tissa Attanayake was defecting to the government; and he had been paid a sum of Rs. 200 million as advance , which the English editions published. Much to the disappointment and dismay of these schemers and deceivers , Tissa Attanayake categorically announced in Parliament two days later that he would never cross over to the government , and those reports were mendacious.