Election campaign strategy and tactics of the President seem a desperate attempt to keep the head above water. It is normal that people resort to ineffective tactics in desperate situations not knowing that they always backfire. Rajapaksa campaign shows signs of dying. Masses seem to have resolved to make a change. From the ordinary villager to the sophisticated urbanite, everyone seems to be coming together to restore, peace, democracy, law and order and fairness and justice. Rajapaksa rule has shown scant respect for any of those or for human dignity. This piece attempts to scrutinize some of the ineffective tactics that the current regime is employing to give Mahinda a third term. 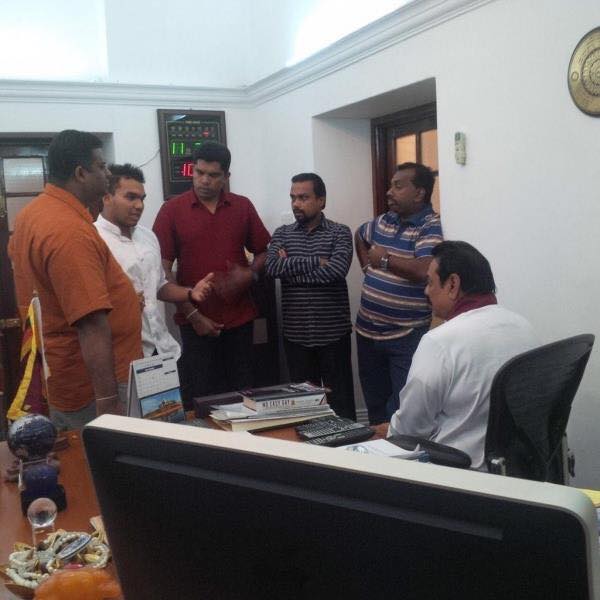 People in the forefront

Mahinda Rajapaksa has sent the wrong soldiers to the battlefront. Although he claims that he defeated the LTTE singlehandedly, he does not seem to have any experience in the battle field tactics. We see Johnston, Yapa, Dullas, Wimal, Gnanasara and a few others in the same calibre as leaders of the battle plan. We certainly know that Wimal and Johnston do not have a good education or in-depth knowledge of politics, nor are they respectable humans with a sense of dignity. The only qualification for their rapid upward trajectory towards Mahinda’s election platform is their ability to give firework speeches (Mal Wedi Katha) that are full of lies, vulgar jokes, misinterpretations, twists and conspiracy theories. Sri Lanka society has moved forward from the 70s and 80s when people could be deceived with lies and fanciful conspiracy theories.

Dullas is there to deny all blames and put it back to the accuser. Gnanasara’s qualifications are his foul mouth, racial and religious hatred. People have learnt what Gnanasara’s real agenda is. They have also learnt that he is a layman in a yellow robe who is full of vices. It is apparent that with such learning people have abandoned him. MR’s strategy to send such low quality men to the forefront therefore would not bring the desired result for him.

Sri Lankans value fairness and justice (Yukthiya saha Sadharanathvaya) very much that the government’s violent campaign would only boomerang. People do not like the opponents being physically harmed or their campaign being disrupted by violence. It is pretty clear that MR regime openly uses a wrong method to discourage the opposition wave. Whilst the main anti government slogan is about the lack of law and order in the country, Mahinda keeps on playing to the opposition hands by encouraging violence against them. This is just plain stupidity. Already millions of Rupees worth properties of the opponents have been destroyed and some serious injuries have been inflicted on some of the opponents.

The introduction of Bollywood stars is child’s play. Sri Lankans are far more advanced than the uneducated Indian masses who indulge in film star worshiping. All Sri Lankans know the bollywood stars do not have any damn knowledge about Indian politics let alone Sri Lanka politics. What does Salman Khan know about Sri Lanka politics and what has he to do with Sri Lanka politics? He may be supporting Mahinda for allegedly being a friend of Namal or for a big pay packet. For what else does he want to meddle in Sri Lanka politics? People may gather to see Salman because sadly Bollywood is the celluloid heaven in a virtual outdoor toilet. It is very unlikely that Salman or the nudity of Jacqueline can turn voters for Rajapaksa with this kind of gimmick (boru show). This is only a ridiculous act of desperation that insults the intelligence of the relatively better educated Sri Lanka masses.

Johnston goes on accusing the opposition that they are spending billions of foreign money on the election campaign, insinuating that Tamil Diaspora and the Western countries are supporting the election campaign of Maithri. First of all, for the US, Sri Lanka is of no importance. One of my Sri Lankan colleagues who travelled to Florida recently told me that Florida alone has a far greater economy than Sri Lanka and the Americans do not give a toss about what happens in Sri Lanka. Besides if the opposition has received foreign money as alleged, it is still someone else’s money whereas the Rajapaksa campaign squanders millions belonging to the poor people of Sri Lanka. Which is worse? Rajapaksa treats the wealth of the country as his own believing that it is his birthright to spend as he wishes.

It was rumoured that there was an attempt to distribute Sil Redi to thousands of people in Sri Lanka in a desperate attempt to buy their votes. If not for the desperation, even Rajapaksas would not go to that low level.

Since the proclamation of the presidential election, this government has approved a large number of policies and made numerous promises. Some examples are the reopening of dual citizenship process and labelling of the cigarette packets with heath warnings. If this regime had the same speed of approving people-friendly policies over the past 10 years, the country could really have become the Wonder of Asia by now. In this lightMahindapala’s scepticism that a country cannot be developed in five years would hold no water. The sudden approval of such policies, reduction of prices, the giving of freebies and promising heaven and earth including a fair and just society beg the question, what on earth was the regime doing for the past 10 years. The answer may be that the life span of those promises will only be until the election is over. The people know those are desperate measures of a desperate person who is concerned only about his survival.

If Mahinda secures the reign for a third term, the fate of the opposing people can only be left in the hands of God. Budget promises and the price cuts will be reversed overnight. Instead, prices of all consumer goods will be raised to recover the losses incurred by the election activities. The concept of a fair and just society will fly out of the window. Rajapaksa will demand everyone to prostrate before him to receive an audience. The public will be made to be subservient to Rajapaksa rule for another eight years. He will change the constitution and reform it not to hold election ever again. Instead he would order the public to accept Namal as the next king in gratitude for the Rajapaksas who have done a yeoman’s service to this nation. Vote him in if you wish and face the consequences.