The man in the limelight today is Maitripala Sirisena (MS) a son of a World War II army veteran and a settler in Polonaruwa in a five acre plot given under the colonisation scheme inaugurated by the first prime minister of Ceylon Mr D S Senanayake. He is a giant killer, a modern David who slayed the giant Goliath Rajapaksa. His role as the new President will be watched by the world. Already politicians, diplomats, kings and queens shower their well wishes. Also flowing in are many suggestions and advices about good governance and democracy from varied sources. I am sure that king maker Chandrika Bandaranaike (CB) will be screening all these during her back seat driving of the present government. A change from the past is what is needed.

The Economist on 17 January published a piece on Sri-Lankan Election by Ask Siri. It concluded “On several fronts, Sri Lanka’s new rulers have much to change”, after discussing pros and cons of various options open to it. The Economist looked at the reasons for the dictator’s fall from his throne, his attempt to stage a coup da la on the day of the final election count and why the winner of the ‘crown’ hurriedly took the oath as President to avert further political misadventures by the vanquished Mahinda Rajapaksa. The threat of fight back by MR is now being hatched by his cronies.

I wonder if the newly sworn in cabinet consider themselves rulers or servants of the public. That will be their first choice for change. The ex-President MR behaved and psychologically assumed himself a king. The huge retinue of ministers and advisers that followed him on his world tour round the world totalled 70 or more. Even heads of government of G7 countries ever took such a bunch of ‘enlightened men and women’. The leader of the pack will always be Mr G. L. Peris, the man well known for switching party alliance for ministerial post and possibly monetary considerations. 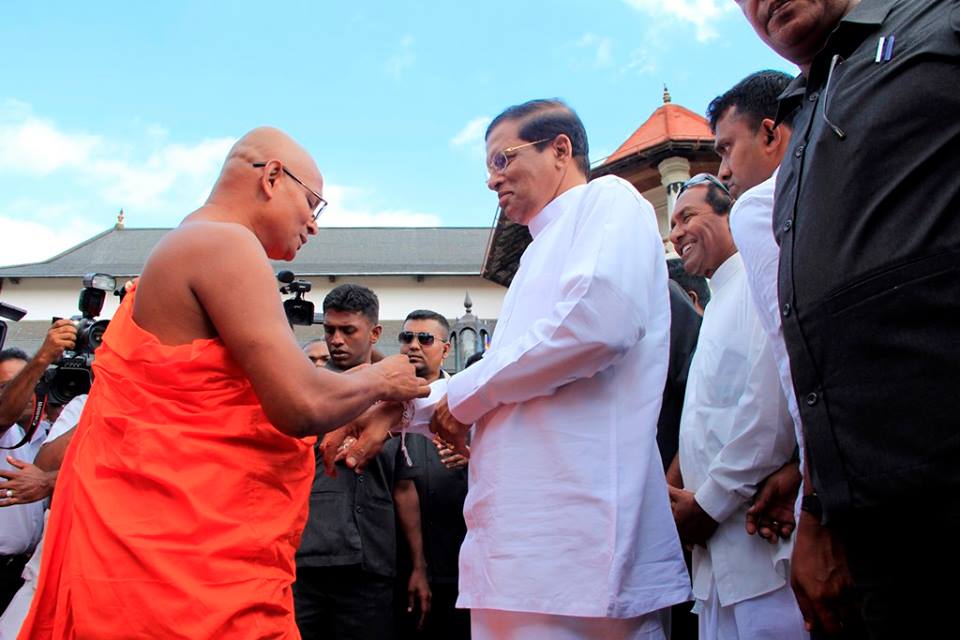 MR’s climb to presidency in 2005 was by immoral means; by bribing the de facto government of the LTTEwhich was severely criticised before the elections by Mahinda as murderous maniacs. It has been reported in the press that one Emil Kanthan was the go between- the mediator for this sinful deal. The amount of bribe handed over was said to be 160 million rupees. In the September 2010 Presidential contest he used the racist slogan of defeating the Tamils and defeating terrorism in the last war in May 2009. In fact he was condemned by the UN in March 2011 for violating the human rights rules and committing war crimes. He continued to be corrupt during his two terms in office.

The army Chief General Fonseka once hailed as the hero who won the war with the LTTE was revenged and put into jail in November 2011 for challenging MR in the 2010 presidential election. Jan 2013 saw another unconstitutional act by Mahinda. The chief justice Shrani Bandaranayake was illegally forced out of her post for not co-operating with MR regime over a constitutional issue. All appeals to legal institutions failed as they had been interfered by MR regime eroding the freedom of these institution where his henchmen ruled the day. The Sinhala public got fed up of him and Rudyard Kipling philosophy in his book Mowgli’s Brothers come to mind when his own men turned against him. Kipling on wolves kingdom writes “the time that comes to every leader of every pack when his strength goes from him and he gets feebler and feebler, till at last he is killed by the wolves and a new leader comes up—to be killed in his turn”. His own party men and women turned against him. MR’s government had perpetrated immoral acts that violated self-ownership. During his rule immoral acts such as murder, rape, assault and slavery were rampant. These acts are immoral because these acts interfere with private property rights. Theft, broadly defined as taking the rightful property of one person and giving it to another was common occurrence under MR government and it was even encouraged.

These misdemeanours and autocratic actions of MR and some previous governments lead us to define morality and to show that a morally responsible government can influence the adaptability of its citizens to various parameters imposed on them by a responsible society.

Human Development scientists (sociologist, anthropologist psychologist etc) think among other influences humans develop morality by learning the rules of acceptable behaviour from their external environment; parents society, government etc. The limits of one moral development is also facilitated by ones religion or belief systems. Children’s concepts of divinity, right and wrong, and who is ultimately responsible for the world’s woes are shaped by the family and by the religious social group to which each child belongs. Their concepts also mirror cognitive and moral developmental stages.

The main moral concept in Hinduism is to avoid the five great sins viz.

Scientists believe that morality influence one’s adaptability. The present government led by a true son of the soil can in fact encourage the Sri-lankan society into a morally responsible altruistic community where moral judgement can lead to moral choice.

Political river, like Mahaweli river, always lurks with man eating crocodiles. Anaconda a large snake found in tropical South American waters are deadly as the sharks in the oceans for an innocent swimmer. A genuine political worker like Maitripala Sirisena has to be protected from vultures and murderers like Somarama and Ossie Coreas who were charged with the murder of the first post-independent Sinhala Buddhist revivalist,SWRD Bandaranaike. Though SWRD was a convert to Buddhism that did not prevent him from using Buddhism to prop up his electioneering and be popular with the Buddhist and win elections. But Sirisena appears to be sincere. If given all support and protection, he can steer the government to change over to be really democratic for all the communities in Sri-Lanka.

Mahinda is now a severely wounded tiger, he will strike back like one as slated in the Hindu Epic Mahabaratha -:

“Like the cobra dark and hissing Karna’s gleaming lightning dart, Struck the helpless archer Arjun on his broad and bleeding heart! Furious like a wounded tiger quivering in the darksome wood,With his mended warlike weapon now the angry Arjun stood”

The supporters of this government should be extra careful of this monster MR who is master minding to arouse ant-Tamil communal passions among the Sinhalese. He told his countrymen that he lost because Tamils did not vote for him. He forgot that the Muslims also voted against him. Even his onetime strange political bed fellow Vasudeva Nanayakkara emphasised that Mahinda lost because Sinhalese did not vote for him in large numbers. The new government had already embarked on a 100 day ambitious programme of action with result.

The three main props of democracy are the Legislative, executive and the Judiciary. The head of the executive are the senior civil servants. Now a National executive council had been set up on 15 Jan 2015 to advice the executive to hurry up implementations of political decisions. The executives must be learned people as persons with little knowledge are dangerous as pointed out by William Shakespeare.The National Executive council should ensure that the security is strengthened and all criminals are put behind bars denying the vanquished a chance to comeback through a military coup on the wave of a communal backlash. A drowning man will clutch even a straw. Desperation knows no caution.