The outcome of President Mahinda Rajapaksa’s meeting with Indian Prime Minister Narendra Modi has been a let down to the Sri Lankan government.  There was a general expectation in Sri Lanka, fueled by the optimism of government leaders that a new era of relations would open up when the President of Sri Lanka met the new Prime Minister of India.  In particular there was the hope that the vexatious international pressure on the government to proceed with a political solution on the basis of the devolution of power to the Tamil-majority areas of the country would subside. But this did not happen.  On the contrary, Prime Minister Modi was uncommonly blunt and precise in calling on his Sri Lankan counterpart to begin delivering on his oft-repeated promise to the international community of a political solution that goes beyond the 13th Amendment.

It was believed that because both President Rajapaksa and Prime Minister Modi come from nationalist traditions, there would be a meeting of hearts and minds and that they would understand and empathise with each other as they were thought to be on the same wavelength.  The Sri Lankan government was hoping that Prime Minister Modi’s nationalist inclinations would make him focus on economic ties with Sri Lanka rather than on minority rights.  This might have been possible if the two leaders were not from neighbouring countries, where the actions of one spilled over into the other country.  For instance there could be a meeting of minds between the leaders of Sri Lanka and Russia where it concerns dealing with separatist insurgencies.  Both countries ended up dealing with their separatists with military force and finally succeeded in crushing them. 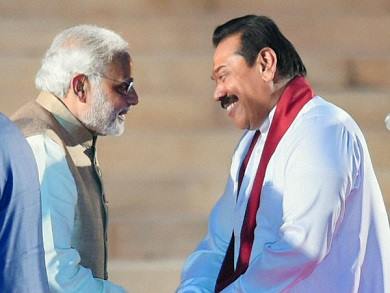 However, there is less reason to believe that two nationalisms that are next door to each other could cooperate.   Those who are nationalists tend to look at issues from the perspective of their own countries and the interests of those they deem to be their own.  It is generally universalists or liberals who think of the larger picture and the wellbeing of all that transcends their own nationality. The boycott of the swearing in ceremony by the main political leaders of Tamil Nadu state and the emotional reaction in Tamil Nadu over the invitation extended to the Sri Lankan president would have sent a message to the Indian policymakers that the issue of Sri Lanka has to be handled carefully.  Inasmuch as President Mahinda Rajapaksa’s nationalism is in relation to Sri Lanka, so would the Indian Prime Minister’s nationalism be in relation to India’s national interest.

It is unlikely that Prime Minister was actually ever considering a new type of relationship with neigbouring Sri Lanka.  His interests have not been with the south of India but rather with issues in the north, where his government won most of its seats and also faces the most serious challenges to its national security.  Now the new government needs to consolidate itself in the south of India where it did not fare well at the general elections. The primary need would be to restore relations with Tamil Nadu. The Indian government would not wish to antagonize one of its largest states.   Simply because his government has an absolute majority in Parliament by itself, Prime Minster Modi will not wish to disregard those states in which the opposition parties have done well.  He would also not wish to disregard the advice of the civil service that outlives governments and forms the backbone of long term Indian policy making.

Sri Lanka itself provides an example of a very strong government, enjoying a 2/3 majority in Parliament, faces problems in governance due to its inability to win the confidence and support of its Northern Province. Having a majority in Parliament does not eliminate the need to have good relations with the constituent units of the country.  It would be unwise for any government to jeopardize its internal relations for the sake of external ones. Accordingly, it is not surprising that Prime Minister Modi has reiterated what his predecessor in office has insisted was the way forward.  In his meeting with President Rajapaka after being sworn in, he had asked the President to take the reconciliation process forward without delay.  He had said that the full implementation of the 13th Amendment and, even more, going beyond it would contribute to the reconciliation process.

There is a danger in the current situation that delay in addressing Indian concerns could aggravate Indo-Sri Lankan problems.  As a nationalist, Prime Minister Modi’s interests are Indian.  He has also been projected as an efficient leader who is in a hurry to get things done. This makes it likely that he will show impatience if he sees nothing but delays and excuses coming from the Sri Lankan side.  It was after four years of delay that the UN Human Rights Council finally decided to appoint international investigators into war crimes in Sri Lanka, as the Sri Lankan side dragged its feet on addressing the issue. The government must not repeat with India what it has ended up with the UNHRC through its delays and denials, which is an internationally sanction investigation.  The people of India voted for Prime Minister Modi to be their strong leader, and Sri Lanka should not seek to become a test case for a show of his strength.

During the war President Rajapaksa promised Indian leaders to implement the 13th Amendment and even go beyond it to an undefined “13 Plus”.  President Rajapaksa made this promise to induce India and the Western countries to support his government’s efforts to militarily defeat the LTTE.   The understanding was that after the LTTE was eliminated there would be nothing that could stand in the way of a just political solution and implementation of the provincial council system in an exemplary manner.  It would be judicious if the Sri Lankan government proceeds to expeditiously implement its promise regarding the system of devolution of power.  Instead of dragging its feet on the implementation of the 13th Amendment, it would be in Sri Lanka’s national interest to set about improving on the workings of this arrangement so that it meets the interests of all concerned.

The Sri Lankan government’s immediate response to Prime Minister Modi’s statement on the 13th Amendment is to refer to the Parliamentary Select Committee appointed by President Rajapaksa for the purpose of finding a political solution.  However, so far the PSC has been a non-starter.  None of the opposition parties have agreed to join it. None of them appear to believe in the government’s sincerity and see in it a time-buying exercise.  In these circumstances it is not reasonable for the government to expect theTNA, which represents the majority of Tamil people, to join the PSC.  The government needs to build the confidence of the opposition parties, and especially the TNA, in the value of the PSC process.  The special concern of the TNA is that the PSC will reproduce the same ethnic majoritarian decision making formula that led to the separatist war in the first place.

The ethnic conflict arose because the ethnic minorities disagreed with the ethnic majority having the numerical majority to always outvote them when it came to matters that involved their interests.  The government needs to give an answer to his problem by re-shaping the method of decision making within the PSC.  It has to find ways to ensure that decision making within the PSC is by consensus rather than by simple majority vote, whereby the ethnic minorities will once again be outvoted as they always have been in the past.  One solution would be to adopt the method of “sufficient consensus” adopted by the South African parties when they were negotiating a political solution to their own civil conflict.  This simply meant that all the important parties should agree to the solutions that were presented.  In practice it meant that the main governing party and the ANC had to agree.  With South Africa’s good offices, which it has offered, a similar arrangement can be developed for Sri Lanka.

Way Forward Can Be Through Revamped PSC