The Extraordinary gazette notification of the Democratic Socialist Republic of Sri Lanka listing of designated persons, groups and entities under paragraph 4(2) of the United Nations Regulations No. 1 of 2012 by the Defence Secretary Gotabaya Rajapaksa dated 20 March 2014 proscribed sixteen overseas Tamil organisations and over 400 Tamils all over the world.

Government gazette is an organ to officially advertise the agenda or decisions of the government and its departments. Under the constitution, any statutory decisions have to come through legislative or the executive and must follow the procedural process.

The proscription details published, should have been the notification of intent for an informed decision making in the parliament or should have been a decree of the President in consistent with the constitution. It is clearly a blanket banning by the controversial and contentious Defence Secretary who has come  under severe international scrutiny for indulging in war crimes. If the matter had come before the parliament, however incapacitated the parliament is at present, some contentious issues could have been debated, corrected, deleted and given legal validity to proceed with the proscriptions.

The extra-ordinary aspect of the one man decision is only the citation of the off shore United Nations Regulation No. 1 of 2012 to proscribe the organisations and persons. There is no local law governing the decision. A state that undermines the very authority of the United Nations on many serious issues have found a regulation of the very organisation to proscribe its birth right citizens around the world without detailing any specific charges against them or giving them the opportunities to defend themselves in a fair trial.

The principle that requires the government to prove the guilt of a person and relieves the defendant of any burden to prove of his innocence was not the basis of Gotabaya Rajapaksa’s decision. It was an authoritative and inconsistent decision of him to act in a wild manner as the shadow President. He appears to have more powers than the President to do anything without coming under the microscope of the legislature or the legal mechanisms of the country.

As far as the UN is concerned, there is overwhelming evidence to implicate the Government of Sri Lanka on war crimes charges. As a responsible organisation, it has to go through the process to consider all the facts and factors attributing to the crimes before it makes its final decision on the warring parties.

As a fully subscribed member of UN, a country that persistently undermines the ethos of the said world body to the extent of refusing to co-operate on the latest UNHRC resolution to investigate its conduct, has now hurriedly found its way to uphold a UN Regulation by publicly displaying a list of randomly selected designated groups and persons.  The Interpol has become an ever-ready  international policing body to serve the authoritarian states under any circumstances. If the parameters of this international agency is not managed well, it will be seen as a policing body serving the despotic regimes in the world.

I briefly went through the names of the organisations and individuals in the proscribed list. The LTTE that was finally decimated with the Mullivaykal massacre, the nonexistent TCC of France and the dead and buried TRO are listed in the proscribed names of organisations. There are known names of former LTTE activists and also those who are engaged in the democratic campaign espousing the Tamil demand for justice and political devolution. This is clearly a senseless desktop  blanket proscriptions based on pathetically weak intelligence gathering. According to media reports, bans were based on information gathered from the outdated database of the LTTE after the war.

The government continue to live on the hypes of its outright win over the LTTE and is still unable to reconcile to the fact that there is no more LTTE to fight against the government. Without continuing to market the LTTE, it is clueless to deal with the acute issues facing the state.

In the names listed as proscribed persons, interestingly, I found the name of the 82 years old Nadesan Sathyendra- a well regarded and respectable Tamil senior. His proscription details publish are: 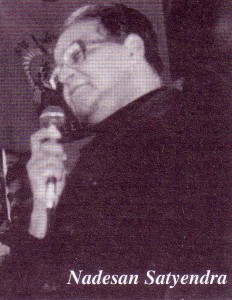 The details reproduced above reflects the shallowness of the information gathering of a person proscribed. The Defence Secretary does not know whether Nadesan Sathiyendra is a man or a woman, his designation, place of birth, his present citizenship status or his address in Sri Lanka if he has one. All these are stated as N/A (not applicable) leave aside N/K (not knowing) them.  The only information listed is his date of birth, UK address and the Sri Lankan passport number. The details disclosed does not spell out any charges against him except for the blanket charge of engagement in terrorism activities.

Having proscribed under the UN Resolution without spelling out any specific charges against him and all the others, the government of Sri Lanka has failed to realise it is violating the laws of the countries the accused are domiciled. In the UK, citizens are protected under a variety of laws, in particular, the Human Rights Law and the Data Protection Act and none of them have been convicted under terrorism charges though proscription against the LTTE is still in force.

Even the European Court of Justice has adjudicated recently that Google must remove on complaint any materials that are false or incorrect about individuals  held in its data base as they violate the rights and freedom of individuals. Proscribing someone without adequate reference to specific charges exposes the government of Sri Lanka of not following the simple justifiable legal principles and not going further to respond to the power sharing demands of the Tamils.

The 82 year old tough speaking Nadesan Sathyendra is a well respected legal intellect who never carried a gun, raised funds for the LTTE or engaged in any militant activities is being included in the proscription list. If he had taken the leadership of the democratic diaspora, he would have given,  un-mitigating heart aches and concussions to the government of Sri Lankan with his far thought out legal acumen. But he decided to work from the sidelines to espouse the Tamils right to self determination, the very concept promoted in the founding Charter of the UN.

He represented the Tamils in the Thimpu talks in 1985 and took considerable exception with the Indian officials for treating the Tamil delegation secondary to the Sri Lankan team in their salutations in the discussions. Demeaned and disrespected Nadesan Sathyendra walked out of the talks expressing his disbelief of inconsistency in not delivering the equitable basic courtesies needed in the discussions.

He single handily managed the ‘Tamil Nation’ website and published well researched articles on nationhood and self-determination. He was an ardent critic of the Sri Lankan governments systematic policy against the Tamils. Occasionally, he appeared in public stages and his speeches were inspirational that anyone in the Sri Lankan government would not have appreciated.

Inclusion of the well respected Nadesan Sathyendra in the proscription list proves the utter desperation of Gotabaya Rajapaksa and also the President Mahinda Rajapaksa who are  determinedly trying to survive in their ever specialising sinister crusade against the Tamils and the other minorities.

Referencing to the Thesaurus and the wider reference guides, I picked up the extreme meanings for the Democratic (Egalitarian) Socialist ( Communalist) Republic (Authoritarian) state of Sri Lanka. This Egalitarian Communalist Authoritarian state is  the fitting image of the present day Sri Lanka that is unable to adhere to the basic standards expected from a responsible state.