The government will take appropriate action against those who give evidence against it at a future war crimes probe, based on the evidence the adversaries give .

“This is a serious situation and we are watching it closely. We shall take appropriate action based on the evidence the detractors give,” Government Spokesman and Media Minister Keheliya Rambukwella told Ceylon Today.

He said the government was aware of the Tamil Diaspora and others, both overseas and in Sri Lanka, including the TNA, going all out to discredit the government which defeated the most ruthless guerilla group in the world ,which no other government could do.

Rambukwella also said there was no credibility in the allegations made against Sri Lanka, claiming that the UNHRC report was flawed and biased, all of which were pointed out in the address of External Affairs Minister Prof. G.L. Peiris at the UNHRC sessions in March.

On Friday, TNA spokesman and Jaffna District MP Suresh Premachandran was quoted, in the Ceylon Today as saying his party would furnish evidence against the government in the event of a war crimes probe. “It was up to the people who were victims to make their representations to the Commission, or, otherwise, we shall be providing the evidence on their behalf, Premachandran was quoted as having had said.

Defence Secretary Gotabhaya Rajapaksa was not available for comment. We were told he was overseas.

Witnesses will be in trouble

”Our position is that we do not want the UNHRC investigation in the country. If we do not allow the investigations to enter the country, there will not be a necessity of talking about witness protection with that regard. In general, it is true that witnesses are subjected to various harassments and threats by those who are involved in crimes.

The UN Investigation And The Rajapaksa Right To Impunity

“…..that deceptive cry of mock patriotism: ‘Our country, right or wrong!’” – Carl Schurz (The Policy of Imperialism)

It was a miracle – of the Rajapaksa variety. When the BBS thugs invaded the Industries and Commerce Ministry on April 23rd, the CCTV camera system in the Ministry malfunctioned[i]. So the Fort magistrate was informed. 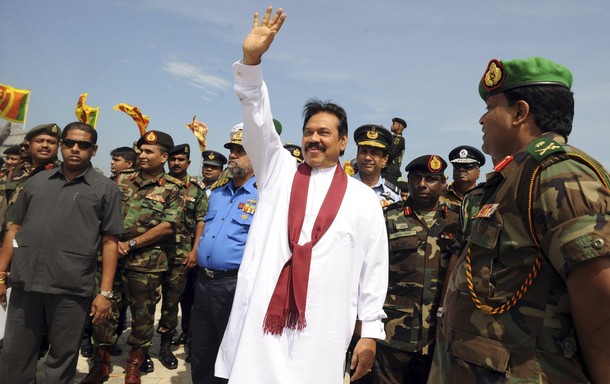 No CCTV footage; no evidence. The BBS will get away with one more crime.

In Sri Lanka impunity, is so normal it barely makes news. The Rajapaksas, their kith, kin and acolytes break the law publicly and blatantly, sans consequences.

The rule of law is dead; the law of the rulers reigns supreme, aided by a subjugated police, a compliant judiciary and an uninformed populace.

Aluthgama almost succumbed to a religious conflagration last week. If that happened, the flares would have spread fast, nationally. And the Rajapaksas would have been responsible, because they deliberately regenerated Buddhist-Muslim animosity, post-war, in furtherance of familial rule and dynastic succession..

The two Muslims youths who allegedly assaulted a Buddhist monk and his driver are under arrest. The law has been implemented speedily, as it should be. But what about the mobs who attacked Muslim shops in the Aluthgama town? Are they too under arrest? Or do they come under a different law?

The Weliweriya demonstrators were mostly Sinhalese/Buddhists; that availed them nothing. The Aluthgama rioters (and others of their ilk) enjoy a limited-impunity not because of their Sinhala ethnicity or Buddhist religion but because they are (knowingly or unknowingly) furthering Rajapaksa rule. Once they outlive their uses, they too will feel the heavy hand of the law or worse.

If their objection to the UN investigations rests solely on its non-national nature, they have an excellent opportunity to prove it – by accepting and implementing the JVP’s amendment to the UPFA’s condemnatory motion.

Going by the regime’s own propaganda, it should not have a problem with the JVP’s amendment. The JVP does not seem to have included any of the alleged crimes committed during or in the immediate aftermath of the war. There does not seem to be any mention of the Trincomalee Five or the Muttur Seventeen, Issipriya or young Balachandran, the shelling of civilians or the murder of surrendered Tigers. The JVP’s list seems to be limited to alleged crimes which happened mostly in the South, and after the war. The victims of the incidents mentioned by the JVP cannot be deemed Tigers or Tiger supporters by any yardstick. The Rajapaksas should not have a problem about investigating these crimes speedily and punishing the culprits. Such a move will not harm even a hoof of their various supposedly sacred cows – independence, sovereignty, territorial integrity….

Will they accede to the JVP’s request? If so, will they actually implement it? Or will they agree and turn the entire exercise into a masque of delusion and procrastination?

Or will disagree and prattle, in thunderous voices, about patriotism, traitors and the motherland?

By limiting its list to alleged crimes which happened outside the theatre-of-war, the JVP has drawn national attention to a seminal fact. Impunity is not limited to the North; it plagues the South as well, increasingly; its victims are not just Tigers or Tamils; it threatens born and bred Sinhala-Buddhists as well.

The Rajapaksas believe they have the right to do whatever they want to do to any Lankan citizen or institution. That is their definition of national sovereignty.

The Rajapaksas have already refused to cooperate with the UN investigation. Therefore referring the issue to the parliament is another hoax. Perhaps they thought that the UNP and the JVP can be browbeaten with the patriotic cudgel into covering up for them unconditionally.

It is nice to be able to say something nice about the Opposition. The UNP and the JVP have refused to fall into the Rajapaksa trap. Instead, in their different ways, they have exposed Rajapaksa hypocrisy.

Hopefully, it is a new beginning.

Human Rights Watch investigator Jo Becker researched and wrote extensively about the LTTE’s child soldiers. Her report on the LTTE’s criminal activities in the Diaspora was a causative factor in the Canadian and EU Tiger-bans. The LTTE and its Diaspora supporters reacted to Ms. Becker/HRW with venomous anger.

Despotic leaders/organisations, whatever their other differences, are alike in this respect: they cannot abide criticism.

Had Velupillai Pirapaharan been alive, he would have refused to cooperate with the UN investigation. He (and his minions) would have talked about Tamil people and Tamil pride and blasted Navi Pillay as an agent of the Sinhala state.

The Tigers would have opposed a UN investigation for the same reasons the Rajapaksas are opposed to it. They need the darkness to hide their crimes.

If the blow-by-blow account of the White Flag incident carried in The Colombo Telegraph is accurate, it reveals an illuminating reality. Real power rested with the Rajapaksa Siblings, even during the war.

When some Tiger leaders decided to do a deal with Colombo to save their lives – even as ordinary Tiger cadres were shooting ordinary Tamils for acting with the same human motivation – no one bothered to contact anyone except the Rajapaksas. When Parliamentarian Rohan Chandra Nehru got the SOS from Tiger leader Nadesan, he did not call Army Commander Sarath Fonseka; he called the neophyte and unelected parliamentarian Basil Rajapaksa. Finally when President Rajapaksa agreed to the deal, he told MP Nehru to contact not the Army Commander but Gotabhaya Rajapaksa.

If accurate, this revelation indicates who really called the shots during the war. It also indicates why the Rajapaksas cannot afford any investigation (national or international) into some of the alleged war crimes. They are not covering up for ordinary soldiers; they are covering up for themselves.

Pity the people in the clutches of fanatical power-builders. Such leaders/organisations cause the most harm to the countries/people/religions they claim to fight for. Boko Haram or the ISIS is not doing Islam or Muslims any favours. The Tigers did more harm than good to the Tamils. Eventually the Rajapaksas will damage Sri Lanka and Sri Lankans (especially Sinhala-Buddhists) far more than the Tigers did.

The Sinhala-Buddhist South will understand the intimate necessity for transparency, accountability and justice, someday. The Sinhala-Buddhist South will understand the danger of uncontrolled power and the need for limits and restraints (national or international), someday. Hopefully that sensible someday will dawn before the Rajapaksas have created too many Sinhala/Buddhist Isaipriyas and Balachandrans.