Ven Watareka Vijitha Thero gets thrown into prison for allegedly falsifying information regarding the attack on his person. Ironically the person who is well known to be the cause for all the attacks on him, Galagoda Aththe Gnanasara is walking about happily, in the precincts of the Dalada Maligawa no less, doing an Adhishtana Pooja. What is the Adhishtanaya? Interesting to know!

Let me ask the jokers and fools of my country including myself, what sort of justice system is this? Ironically the Minister of Justice the Hon. Rauf Hakeem whose people are the target of the worst racial attacks since1983, is a Muslim himself and is doing nothing as he is made to be a puppet.  A selfish puppet  who will not leave his job because of the various perks and benefits it brings. 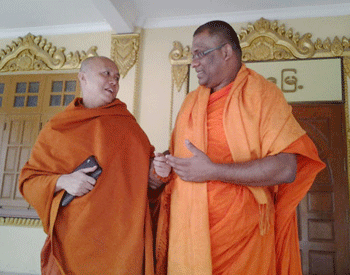 In this tragicomedy the major actors are the two Mahanayake Theros, who are so comfortable in their golden palaces up in the hills, that they do nothing to initiate disciplinary  procedures according to the Vinaya rules set out by the Sasana. The Catholic Church ex communicated that wonderful Priest, the late Fr Tissa Balasuriya, at least for a while. What was Fr Tissa’s crime compared to thug priest Galagoda Aththe?

Another actor in the drama, the Rev Sobitha, a Senior Chief Monk in the same blue blooded Siyam Nikaya, Kotte Parshawaya (Chapter) is where Galagoda Aththe too belongs. The Ven. Sobitha is so busy trying to be the exemplary common Presidential candidate that he has forgotten or chooses to take NO action against Galagoda Aththe. The very senior Ven. Bellanwila Wimalaratana too belongs to this Chapter. The Ven Bellanwila  is at all the fora on reconciliation and is a great philosopher and University Don.Is he acting on this stage as well?

Collectively NO Buddhist priest has openly condemned the BBS or Galagoda Aththe. People in Karandeniya know the history of Galagoda Aththe very well. He was a member of the splinter group of priests from the Siyam Nikaya – the Wathurawila Wanawasi Priests (the forest monks of the Waturawila area in Karandeniya). A rather loose group and Galagoda Aththe was a rogue monk even then, well into various vices, so much so that he was asked to leave this group. He reconnected with the Kotte Chapter of the Siyam Nikaye and as all can see, his is the prodigal return.

In this macabre drama, one  of the most cruel, mean, crooked stooges in the Police Department entered the scene today. This is none other than Anura Senanayake, the singing cop. The man who was behind one of the worst tragedies in this country with regard to the Prison attack and many more. DIG Senanayake, called for a meeting on the role of the clergy in keeping the peace. Over 500 clergy had attended the meeting convened by him today. This cop who is the lackey of Gotabaya Rajapaksa who supports the BBS has the courage to talk about maintaining peace while aiding and abetting the BBS? Watching this drama, does this not make us Sri Lankans an audience of fools or jokers or both? Fools and Jokers! wake up before it is really too late.