We, Tamil Centre for Human Rights – TCHR are deeply concerned about and strongly condemn the heinous violence that has been meted out this monthagainst the Muslim community in Sri Lanka.

Looking at history – ethnic violence, sectarian violence and cultural violence against the Tamils and Muslims in the island are nothing new. Impunity is deeply entrenched and has continued for many decades.

The first racial riot in the island was in June 1915. It was between the Sinhala Buddhists and the Muslims – 136 Muslims were killed and 205 injured and raped. Nearly 85 mosques were damaged and more than 4,075 muslim-owned shops were looted by the Sinhala rioters, from Central province to the Western and North Western provinces.

In 1974 tension intensified between the Singhalese and Muslims in Mylumkulam in Puttalam. Government officials and the Police showed their partiality and supported the Singhalese.

In January 1976, as a consequence of the assault on a Muslim youth by a Singhalese bus driver (CTB), Sinhala-Muslims riots broke out in Puttalam. Muslims in Sirampiaddy, Pottuvil and other villagers were severely attacked. A mosque at Pottuvil (Quela Mosque) was completely destroyed and 18 Muslims who were assembled in another mosque in Puttalam were shot dead. The Muslims working in the Cement Cooperation in Puttalam were attacked and no protection was given by the Police. 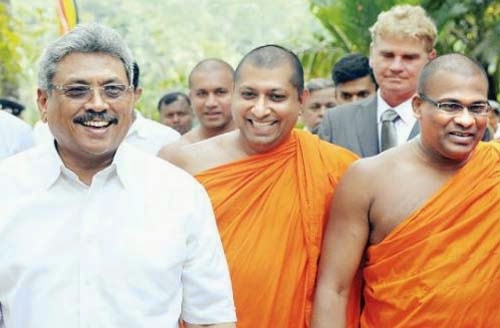 In 1982, from 30 July to 4 August, Sinhala-Muslim riots broke out in Galle and then spread to Kandy, Mawanella and others parts, including Colombo.

In November 2002,Sinhala-Muslim riots took place in Chillaw. A group of Singhalese burnt down many houses belonging to Muslims and several people were severely injured in this incident. A Muslim refugee camp in Puttalam was also attacked and 75 Muslim families were forced to seek shelter in the nearby mosque.

In Katugoda in Galle, a 22 year old Muslim youth was shot dead and several others were injured.

During this period, only members of the Tamil Federal Party or Illankai Tamil Arasu Kachchi – ITAK raised this matter in the Sri Lankan Parliament.

In August 2006, a case was filed by some Singhalese against the purchase of 30 acres of land by Muslims in Palavi, Puttalam. This case was rejected by the Court. When the Muslims who were displaced from Jaffna, were moving onto this land, a group of Singhalese, led by a Buddhist monk, immediately chased them away violently, preventing them from settling in Palavi. On the same day they installed a statue of Buddha in that village.

On 10 September 2011, a group of Buddhist monks led a crowd that demolished a mosque in Anuradhapura.

According to BBC South Asia of 20/09/11, Sri Lankan defence secretary Gotabaya Rajapaksa clarified earlier reports about the fate of a mosque destroyed by a crowd of Buddhist monks. The defence secretary told the BBC he could not order the structure to be rebuilt, contrary to what had been reported earlier.

On 20 April 2012 thousands of Buddhist monks and their followers in Dambulla staged a protest against a mosque and a Saiva (Hindu) temple, setting out from a Buddhist sacred area in Dambulla. The protesters went to the mosque waving Buddhist flags and shouting slogans (you Muslims eat beef you can’t stay here). They tried to storm the building.

On 22 April, Sri Lanka’s Prime Minister who is responsible for the Buddha Sasana and Religious Affairs ordered the mosque in Dambulla to be removed from a sacred area.

Muslims claim that the mosque was established in 1962 and that they have prayed there regularly for many decades. But Buddhist monks say that the 50-year-old mosque had been constructed illegally.

We condemn, in the strongest terms, the incidents, which are against all human rights norms.

Attacking innocent children, women and civilians is not courageous. It is courageous to protect freedom.

TCHR would like to offer our condolences to the family and friends of the victims of these heinous crimes. These horrific and totally unprovoked attacks have no place in the world which has unequivocally condemned them.

The speech was full of venom, motivating Sinhala Buddhist mobs to instigate violence against Muslims not only in Aluthgama but everywhere in Sri Lanka.

The government, which banned 16 diaspora organizations together with 424 individuals under the UN Security Council Resolution 1373 should realize whether they talk with any sense of justice or injustice.

The Rajapaksas’ policy is very simple. What is “good” for them is an act of democracy and what is against them is considered as instigating violence. Can any neutral individual or institution say that the speech made by Buddhist monk Galagodaatte Gnanasara in Aluthgama is peaceful and not incitement to violence?

Within a few days of the violence in Aluthgama, it was reported that Ven. Watareka Vijitha Thero, a Buddhist monk who is critical of BBS, was attacked by so-called unknown person. When Ven Watareka Wijitha spoke to the media from his hospital bed, he said he had been assaulted and ‘cut’ by a group of men in robes – Buddhist monks.

It is well known that the Defence Secretary of Sri Lanka, Gotabaaya Rajapaksa, brother of PresidentRajapaksa, is a close associate and supporter of  the BBS. He participates in BBS public events. Obviously BBS will enjoy official impunity.

The Police allowed the mobs to act freely and are reluctant to take any action against the BBS or to accuse the BBS of instigating sectarian violence.

Now Rajapaksa’s government has lost the trust of Tamils, Muslims, India and the International community. These four directions indirectly checkmate the Rajapaksas. The outcome of this checkmate will emerge in a matter of months or years.