“There is…..no worse crime than hatred.” – The Buddha (Dhammapada)

Thirty one years ago, Sinhala mobs attacked all Tamils everywhere in Sri Lanka because some Tamil militants killed 13 Sinhala soldiers in Jaffna.

One month ago Sinhala-Buddhist mobs targeted all Muslims in Aluthgama, Beruwala and surrounding areas because three Muslim youths reportedly assaulted a Buddhist monk and his driver.

The ‘Four Four Bravo Operation’ which killed 13 Sinhala soldiers actually happened. There are conflicting reports about the alleged assault on the monk. But ‘They attacked a monk’ was the slogan of the mob as well as the post-facto justification peddled by everyone, Gotabaya Rajapaksa downwards. 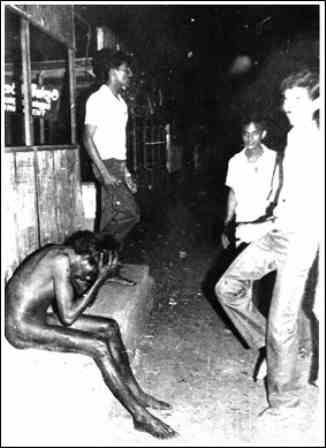 Therefore let us assume that the monk was actually assaulted by three Muslims youths.

Even by the totally anti-Buddhist logic of ‘an-eye-for-an-eye’, the mobs should have assaulted the three attackers. They did not. Instead they stoned and burnt some shops in Aluthgama belonging to people who had nothing to do with the incident and had no connection with the alleged perpetrators. The shops were targeted simply because their owners were Muslims.

The second argument used to justify the Aluthgama violence is that a Buddhist procession/demonstration was stoned by Muslims from inside a mosque. If the Sinhala-Buddhist mobs attacked the supposed Muslim assailants, again it would have fallen at least within the ‘an-eye-for-an-eye’ logic. But they did not. Instead they attacked homes and shops and other mosques – none of which had anything to do with the stoning incident. Once again the only justification was that these properties belonged to Muslims.

If in 1983, the Sinhala mobs wanted to march to Jaffna and take on the LTTE that would have made some sense. If they flocked to join the police, army, navy and the air force so that they could wage war on the LTTE for killing 13 soldiers that again would have made some sense. They did neither. They were not concerned about punishing the LTTE. They just wanted to attack and kill Tamil people and loot and burn Tamil properties.

In Orwell’s dystopia, there was ‘Thought Crime’. Black July and Aluthgama were premised on something far more irrational and heinous: ‘Birth Crime’. Some Tamils killed some soldiers; so every Tamil became guilty of murder. Some Muslims ‘attacked’ a monk; so every Muslim became guilty of assaulting a monk.

Birth Crime is not just a Sinhala-Buddhist myth. The LTTE subscribed to it. Birth Crime was the reason for the Anuradhapura massacre and the mass expulsion of Muslims from the North. Birth Crime was a fundamental tenet of Christian anti-Semitism as well as in Nazi thinking. Without Birth Crime, the Holocaust would not have happened.

Birth Crime plays a seminal role in the current Israeli attack on Gaza. Three Jewish teenagers were abducted and murdered – a heinous deed. But instead of carrying out a proper investigation to identify the actual perpetrators and arresting them, the Netanyahu government used this undoubted crime as a justification to inflict collective punishment on entire Gaza. Palestinian death toll has topped 700 already and UN Human Rights High Commissioner Navi Pillay has warned Israel that “there seems to be a strong possibility that international law has been violated, in a manner that could amount to war crimes”[i].The bombs which rain on Gaza are incapable of making a distinction between supporters and opponents of Hamas, as they are incapable of making a distinction between babies in their cradles and armed Hamas militants. What they do is to inflict collective punishment on all Palestinians for the crime of being born Palestinian in Gaza.

Osama bin Laden justified 9/11 by arguing that all Americans are guilty of the crimes of their leaders because they freely voted those leaders in. His explosives could not zero-in on those Americans who supported their leaders’ imperial actions globally and spare those who didn’t. Once again it is the logic of collective punishment based on that inescapable sin, ‘Birth Crime’.

‘Birth crime’ is implicit when the JHU, BBS et al hold every Lankan Christian guilty of the crimes of colonial invaders; or when the crimes of Kalinga Maga and Raja Raja are invoked to justify anti-Tamil phobia.

There might be some defence against even thought crime; but none against Birth Crime. Nuances are anathema to extremists of every race and every faith. In birth crime, there is no room whatsoever for nuances. That is why it is so beloved by fanatics everywhere.

And when Birth Crime becomes the ruling logic, no atrocity is impossible, including massacres and even gas chambers.

During Black July, the mobs ruled and chaos reigned (as was the case during the Aluthgama violence, though on a much smaller scale and of shorter duration). For non-Tamils this chaos was uncomfortable at worst. But for every Tamil, man, woman and child, rich and poor, labourer and high official, it was lethal. No Sinhalese (or Muslim) felt unsafe, and no Tamil felt safe during Black July.

Perhaps for many a conscious or unconscious Sinhala-supremacist, the days of Black July provided a glimpse of what they wanted Sri Lanka to be – a Sinhala country in which even the poorest Sinhalese was more powerful than the richest Tamil. For them, utopia would be Black July (and Aluthgama) as a permanent state.

Last week several navy personnel were accused of raping two children in Jaffna. Even if they are guilty of this atrocity, it does not mean that all naval personnel are child rapists. Last week, the courts ordered wild life officials to remove a stolen elephant calf from the temple of the one time JHU heavyweight and former parliamentarian Kolonnawe Sumangala Thera. This does not mean that every monk (or even every JHU monk) is an elephant thief. Last week the Chairman of the Tangalle Pradesheeya Sabha was found guilty of murder and rape. This does not mean every ruling party politician is an actual or potential murderer/rapist. Any person who makes such sweeping generalisations will be either ridiculed as a fool or condemned as a trouble-maker.

How come this same sense vanishes when we are dealing with entire communities? How come we think it is correct and sane to punish an entire community for the crimes of some of its members?

Leidensweg is a Germans term used to describe the tragedy of those who are faced with unimaginable suffering because of their own past mistakes and crimes. Sri Lanka is still paying for old sins, including Black July. And yet, undeterred, there is an attempt to ignite mini-Black Julys, this time against Muslims. Instead of dealing with the root causes of the last war, we are busy preparing for the next war.

This deadly slide towards a new conflict with yet another minority cannot be halted without rejecting the interrelated notions of Birth Crime and collective punishment.

Whether Black July remains a memory of what should not be done or becomes a blueprint for the future depends on our capacity to wean ourselves from the anti-Buddhist notion of Birth Crime.