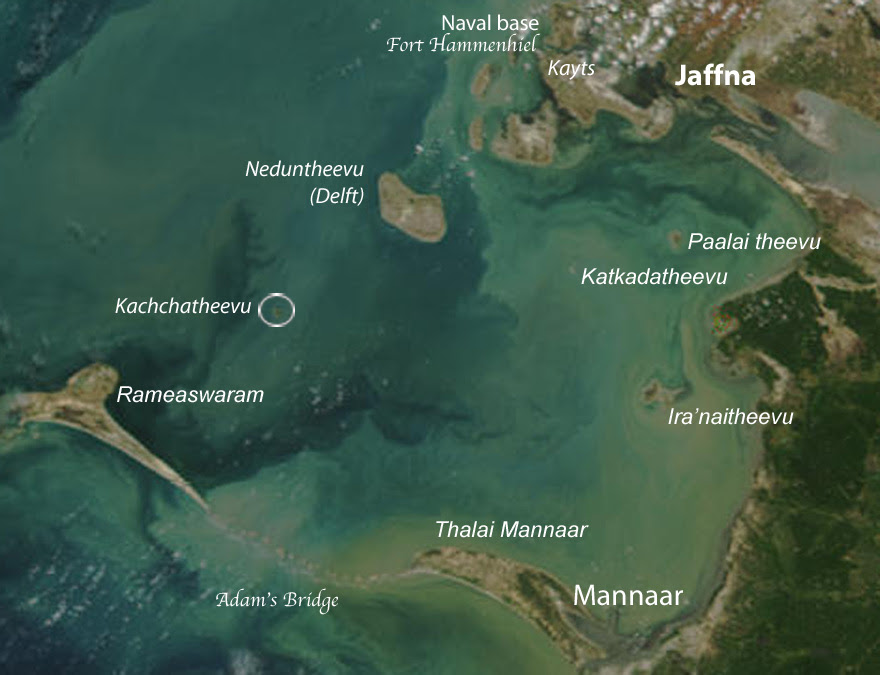 Maritime boundary in the Historical Waters of the Palk Bay between India and Sri Lanka. [Courtesy: U.S. Department of State, Bureau of Intelligence and Research, 1975]
NAVAL POWER IN INDIA`S GEOPOLITICS
http://www.revistamilitar.pt/artigo.php?art_id=798#_ftn4 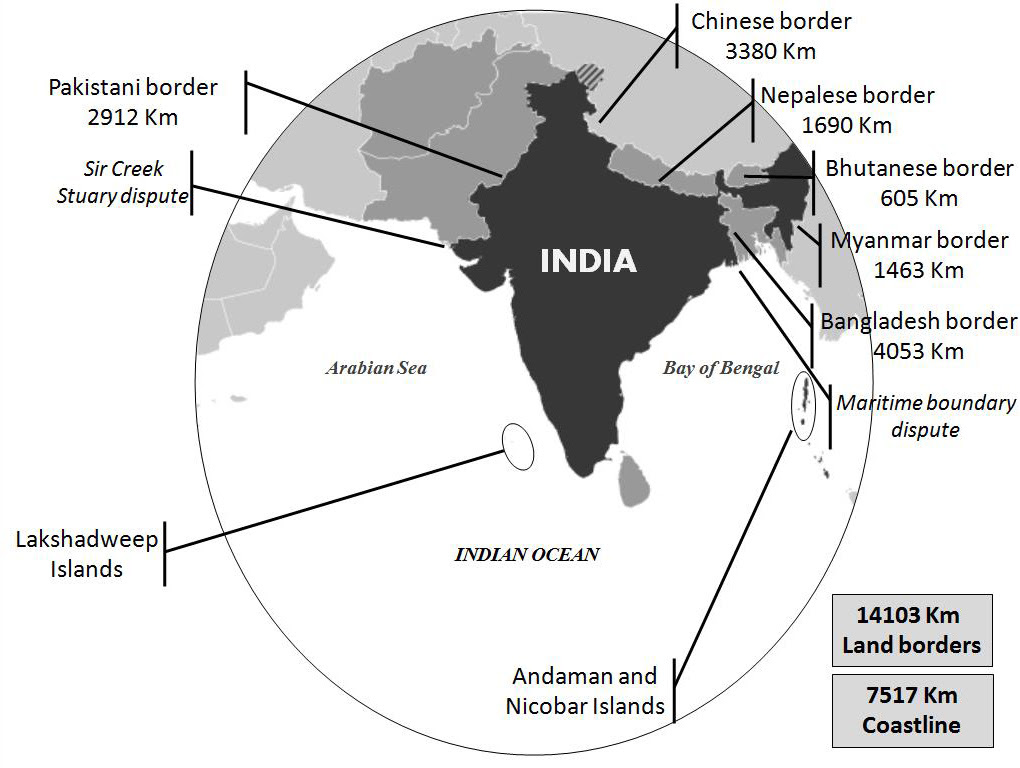 Indian Defense Authorities launched an Integrated Guided Missile Program (IGMOP) for the Research and Development of comprehensive range of missiles, which is managed by the Defense Research and Development Organization (DRDO). They have now developed Nuke capable Agni I – VI (capable of carrying 1000-2000kg war heads within a range of 1000 – 8000km) which can target any military or any other installation in South Asia including Sri Lanka.

India and the US joined in secret to cut off China’s supply route from Iran-Pakistan-Sri Lanka –Bangladesh and Myanmar. It is reported that India is also in the process of developing a Ballistic Missile Defense (BMD) system as an initiative to develop and deploy a multi layers system to protect India from possible ballistic missile attacks from Pakistan and China. Recently, India charged Sri Lanka for secretly soliciting technical support from Pakistan to develop Nuclear Energy and possible enrichment of Uranium so that Sri Lanka could develop medium range missiles with Nuke war heads.

This sensitive defense related information was revealed when the Indian Intelligence Agency’s Research and Analysing Wing (RAW) sacked its high ranking officer, Amreet Ahluwalia from his posting (Beijing Chief) in China. Ahluwalia was charged for compromising sensitive defense information relating to India-China-Pakistan and perhaps Sri Lanka. Ahluwalia, a joint secretary level officer, was suspected for ‘Operational Impropriety’ and has been summarily dismissed. Earlier, in 2004, the same charges were brought against Rabinder Singh who had defected to the US with stock files of information regarding India’s missiles and nuclear capabilities.

In 2008, the then RAW head, Ashok Chaturvedi charged JS level officer Ravi Nair posted in Sri Lanka for cultivating intimate connections with a Thai-Chinese girl who was said to be a Chinese Spy. This connection had begun when Ravi Nair was posted in Hong Kong and was uncovered when his legal wife complained to the RAW about his liaison with this Thai-Chinese woman.

A few weeks ago, the Indian HC in Sri Lanka was rocked by the sexual scandal involving its 1st secretary, Anurag Srirvastara and the Editor of the Daily Mirror, Champika Liyanaarachchi. The Editor of the DM published a few news articles against India as a smoke screen after their clandestine relationship was exposed,. She still continues her secret liaison with various agencies which are anti Sri Lanka.

India, this time used the Tamil Card to get more economic benefits from Sri Lanka while opposing every move of the Chinese Investors. The most recent being the Exclusive Free Trade Zone in Trinco for the Indians and the Catic deal in Colombo.

India as a great power

Know your own strength

India is poised to become one of the four largest military powers in the world by the end of the decade. It needs to think about what that means 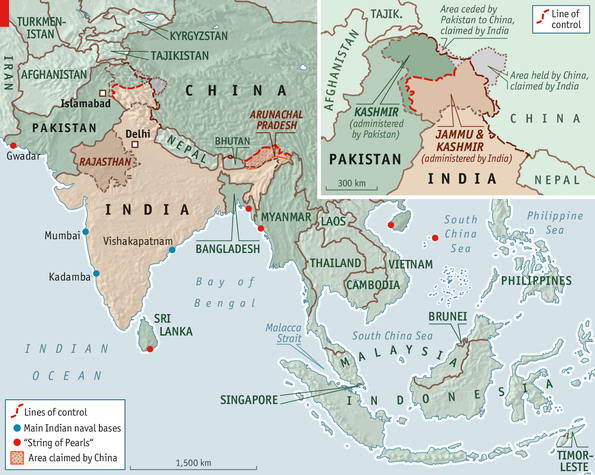 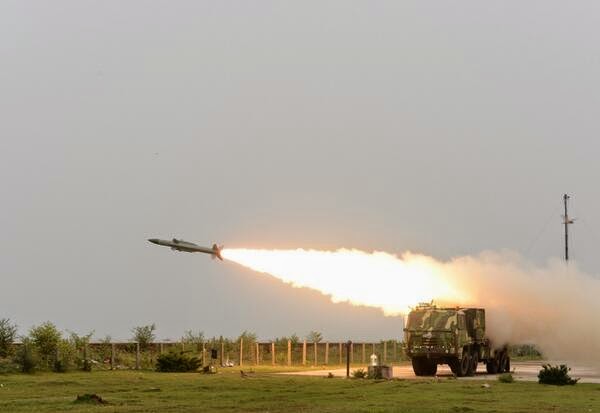 In the summer of 2000 French media reported that Israel’s German-built Dolphin submarines had tested 1,500km cruise missiles near Sri Lanka.

Israel manufactures and deploys technologically sophisticated and diverse ballistic missile, cruise missile, and missile defense systems. [1] Several overarching themes characterize Israel’s missile program. First, Israel’s strategy of maintaining a “qualitative military edge” over potential adversaries motivated the country to rapidly develop one of the region’s most capable missile production infrastructures, and to deploy the region’s most advanced missile systems. [2] Second, Israel’s space program provides an additional venue for advanced ballistics science and rocketry engineering, and has collaborated technologically with Israel’s missile community­. [3] Third, Israel has often offset the high costs of developing and maintaining a superior missile capability both by entering into international development collaborations and by exporting and licensing its missile technology. [4] Finally, Israel has developed a layered and multi-faceted portfolio of both offensive and defensive missile programs to address the aerial threats posed by a diverse set of both state and non-state actors, operating from different geographic locations and equipped with different types of weaponry. [5]

“The defence ministry has confirmed that no such testing has taken place within Sri Lanka’s territorial waters or the exclusive economic zone,” the foreign ministry said in a statement.

The statement was reacting to local press reports based on an article in the London Sunday Times of June 18 which cited Israeli defence sources as saying that the tests took place in May off Sri Lanka.

In Jerusalem, a defence ministry spokesman denied the report,

“The information is just not right,” a defence ministry spokeswoman said, refusing to comment further.

Israel has never confirmed nor denied it has nuclear weapons and refuses to submit nuclear sites to international inspection.

It is one of four countries along with India, Pakistan and Cuba that have not signed the Non-Proliferation Treaty (NPT), prompting concern from neighbouring states over its nuclear intentions.

It is rumored that Israel in 2002 off Sri Lanka tested a nuclear-capable version of thePopeye Turbo cruise missile from one of it’s Dolphin Class submarines.

According to news reports the Germans are going ahead with plans to sell Israel two new AIP-equipped Dolphin class SSK submarines. Israel already owns three Dolphin submarines acquired from Germany in a deal made after the first gulf war. These Dolphin subs replaced Israel’s German built Gal Class submarines, which entered service in 1977.The Dolphin class is designed for interdiction, surveillance and special-forces operations with torpedo and cruise missile weapons capabilities. 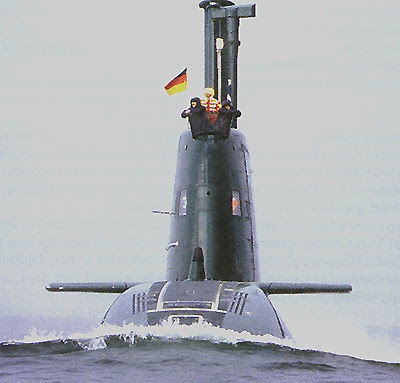 These new Dolphin submarines will be equipped with an air-independent propulsion (AIP)system not on Israel’s current submarine inventory. This system would significantly increase the subs submerged range and stealth.

It is rumored that Israel in 2002 off Sri Lanka tested a nuclear-capable version of thePopeye Turbo cruise missile from one of it’s Dolphin Class submarines. This Submarine Launched Cruise Missile (SLCM) reported range was about 1,500 km, significantly larger then any other SLCM variant carried by Israeli subs.

The rumours concerning Israel’s nuclear-capable cruise missiles had stalled these additional sales from Germany in 2003, as did Israeli reluctance over the price. Thecurrent deal is reported to be worth EUR 1 billion ($1.17 billion) for the two AIP-equipped SSK Dolphin Class submarines.

The $1.17 billion acquisition of these submarines constitutes a major outlay from the Israeli defense budget which was about $9.1 billion in 2003.