Sabaragamuwa university students claim attempts are underway by the Terrorist Investigation Department (TID) to intimidate their colleague a Tamil student Shanthikumar Sudharshan who was assaulted and cut early last week by para military group run by Rajapakshe family member, into admitting the cut injuries are self-inflicted.

The Sri Lanka’s  Rajapaksha government forces usually threaten the victims to say that it was Self-inflicted or bribe them with money or threaten to kill the family members and if all fails they will use there ‘White Van’ to abduct and kill the victim and frame them as LTTE member or sympathiser.

Meanwhile, the TID had visited the University premises yesterday along with Sudharshan and have claimed to have uncovered several leads, which several Police and CID teams had not been able to discover during the days they searched the area to which allegedly includes a piece of a blade.

Sabaragamuwa University undergraduate Shanthikumar Sudharshan who fell victim to a targeted attacks against students of Tamil ethnicity within the university earlier this week, has been arrested by the Terrorist Investigation Department (TID) this morning. 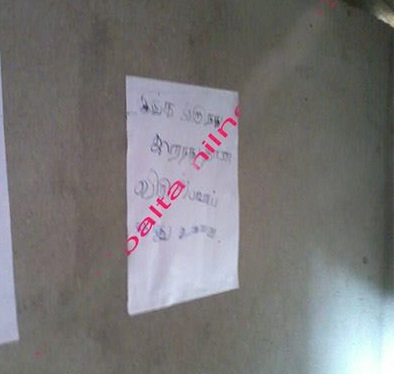 The Inter University Students Federation (IUSF) states the student – a resident of Kilinochchi, who was hospitalized following the attack had been held in Police detention following his treatments and thereafter had been arrested by the TID for further interrogations today.

It is interesting to note, the arrest is made just days after the University Vice-Chancellor who commented on the incident claiming he believes the attacks is a product of the group of Tamil students themselves in order to enter universities closer to their homes – a claim that was supported by Higher Education Minister S. B. Dissanayake as well who stated at a media breifing last week that the student inflicted the cuts on himself.