[TamilNet, Thursday, 11 September 2014, 16:32 GMT]“I am convinced that if Ukraine solved its domestic problems without the use of armed forces, without the bloodshed there over the past month, without the use of heavy artillery… this tragedy would not have happened,” said Russian defence minister Sergei Shoigu to visiting Malaysian defence minister Hishammuddin Hussein on Wednesday, while discussing MH 17 investigation. Whether Russia would speak in the same line and would advise its BRICS partners, especially New Delhi, to take the line in the investigation on the crimes of Sri Lanka and in the decades long militarised genocide against Eezham Tamils is what world humanity wishes to know, said Tamil activists for alternative politics in the island. Eezham Tamils never started a military conflict in the island.But in response to a domestic political question, the early manifestations of which was just ethnolinguitic and democratic struggle for federal polity, the Sinhala State in the island meticulously planned a military-genocidal solution long before Eezham Tamils thought of any militant struggle.The best of the affidavits in this regard has come a few years ago from Mr. Neville Jayaweera, Colombo’s former Government Agent in Jaffna in the early 1960s.After seeing the Satyagraha movement of Tamils following the implementation of the Sinhala Only Act, Colombo’s strategy in the early 1960s to contain a future Tamil revolt was establishing a chain of military camps to encircle the Northern Province, Mr. Jayaweera recorded in 2008.However feeble it is, and detracted leadingly by New Delhi, the OHCHR investigation has kindled a debate today. Encouraged by New Delhi’s stand, Colombo’s agents, some Colombo-centric institutes and so-called intellectuals try to paint a face-saving image while the State and its military are engaged in every kind of intimidation. Proving the genocide is the responsibility of Tamils is perhaps the stand of the West, after leaving them in the hands of the SL military. The International Crisis Group came out with a statement in these lines in 2012. 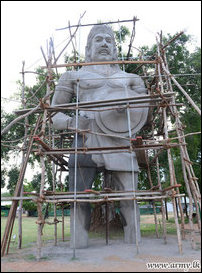 As the militarised structural genocide in the country of Eezham Tamils now takes place in hitherto unseen proportions and accelerated level, Mr. Jayaweera’s affidavit should not go unnoticed in proving the long contemplated military-genocidal intentions.What happens today is not merely encirclement of military camps or world war sized bases, but the military directly and openly engaging in demographic genocide and building protected Sinhala colonies in the country of Eezham Tamils. The Tamil village Kokkachchaan-ku’lam in Vavuniyaa district becoming ‘Nandimithragama’ with a giant statue of Nandimithra (a mythical giant who helped Dutugemunu) is the latest example.

* * *
After meeting the Prime Minister of the New Delhi Establishment, TNA leader Sampanthan was expressing concern about strident criticism coming from the diaspora and the need to contain extremism.Sampanthan was arguing that no one in the world is prepared to accept independence of Eezham Tamils and therefore they should accept ‘Sri Lanka’. It is said that Mr. Modi was insisting on Eezham Tamils accepting ‘Sri Lanka.’The matter of war crimes investigation was not at all raised by the TNA. Earlier the TNA chief minister Vigneswaran was arguing against Tamils claiming genocide.Former Indian-installed North-East chief minister Varatharaja Perumal was recently detracting the investigation in an intimidating tone that any investigation would affect the former LTTE members in the diaspora too. Perhaps an elephant and a pot are the same for him.Tamil polity in unison has to stand upright in telling the world the genocide the nation of Eezham Tamils faced, faces and its righteous need for the exercise of self-determination for independence. It cannot accept ‘Sri Lanka’ just because others tell it.The catalogue of deceit Eezham Tamils faced for several decades has not come from Colombo alone. Serious students of politics will know how that deceit originated with the British and was steadily continued by New Delhi and Washington at every stage of the struggle.One may ask why China is not discussed. China doesn’t have social leverage. It depends only on the Establishment in Colombo for its inroads. But India and the West count more because of the socio-cultural-outlook links and therefore the struggle has to be essentially addressed at them.Interests motivate powers and outlook may change with ground realties that are not necessarily military. Politics of a nation as such of Eezham Tamils is to either convince the concerned powers of the overlapping interests and if they are not listening, then to prove collectively with Tamil Nadu and the diaspora that the power interests cannot be achieved without addressing the question. Disowning fundamentals of the struggle is neither politics nor diplomacy.