The tide has turned; the time has come to act. The Rajapakse Regime must be smashed without mercy; Uva is the beginning of the end for the Mahinda–Gota–Basil power-drunk outfit. When land slides, an avalanche follows, but only if we do our bit.  No quarter must be given, no opportunity lost, no breathing space allowed.

Laxity will be used by Rajapakses, their cronies and their henchmen to defer fate. The opposition and the people should be lashed if they do not persevere with the determination of Caesar quelling Gaul or Alexander pursuing Darius III. Let us finish off this regime, its crooks and its cronies who have devastated our nation under cover of Rajapakse darkness. 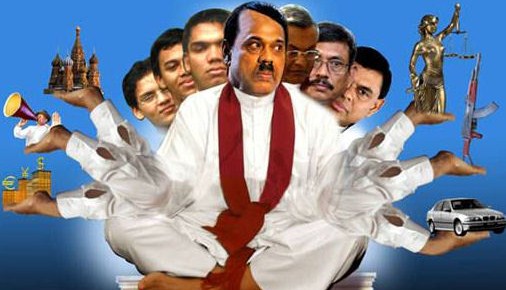 The news from Uva is excellent. I do not rejoice for the UNP; that is a big question mark; but I revel in the funeral ceremony of the Rajapakse-UPFA and the cremation of the Dead Left. The simple but benighted folk of Uva gave the UPFA 73% of their votes in the 2010 PC elections. In General and Presidential polls thereafter it remained high. Then in September 2014 it crashed; in all-Uva to 51% and in Badulla District it collapsed cataclysmically to 48%! There is not one province in Lanka where Mahinda Rajapakse can poll higher. If this is all his side can poll in Uva he is facing disaster in urban areas; the angel of political death beckons.

Electoral abuse was rampant; take it from me, my sources are Dead Left members who worked the ground; bribes in cash and kind, millions in state funds, unregistered vehicles, hot lines to a prostitute police force. This is the most execrable example of electoral wrongdoing in this country since the Mangala-led Wyamba campaign in Chandrika’s time. The regime cannot repeat this on an all-Island scale in Presidential and General elections as the people have been reinvigorated. Next time these scoundrels will be beaten and chased form every village and bazaar.

Where does Uva leave my Single Issue Common Candidate (SI-CC) strategy? Are we in a stronger position? Will Ranil and the UNP feel revitalised and deem they can go it alone on a Full Executive Presidential bid? WillRanil demand the Common Candidacy as his rightful due? I have reflected and am of the view that the UNP going it alone is foolish and risky for itself. Mangala’s statement reflects this concern.

Hence we of the SI-CC should consider linking the first and third question if the UNP demands the CC in the light of its renewed electoral strength. Colombo Telegraph readers may recall that I raised the question of what would happen if the UNP polled over 40% in Uva in my piece of 13 July:

“Ranil and the UNP should take note of five points. (a) Mahinda Rajapakse can be defeated this time because he will be hard pressed to secure 60+% of the Sinhala-Buddhist vote, that is 40+% of the national vote. But he can be defeated only if the main opposition parties and groups field a joint candidate. (b) The way to get a joint candidate is to focus on the abolition of the executive presidency and exclude diverging social and economic policies, including the UNP’s. (c) The road map must be unambiguously endorsed by all to give the public iron-clad confidence in the procedure. (d) If Ranil wishes to be prime minister in the future parliamentary system, there is no point in craving for a six-month temporary presidency. (e) If the UNP wishes to propose a name from its ranks for this “short-term job” it had better do it  now”.

Mangala and I believe thinking brains in the UNP, presumably including Ranil, agree with assessment and strategy (a). Surely they then understand that (b) and (c) are imperative.  We can leave aside (d) and (e) as matters for the UNP to decide for itself. Assuming that Ranil and the UNP do not intend to snatch defeat from the jaws of victory, and that they are seeking endorsement of a Common Candidate bid, then it leaves (b) and (c) to be answered. Will Ranil and the UNP make, and repeat over and over again, a loud, clear and unambiguous pledge to abolish the Executive Presidency? Will they vow to do it within six months? If yes then they can endorse the Road Map designed by Sobitha’s group or they can propose one of their own.