Sri Lanka High Commissioner in United Kingdom, Chris Nonis has resigned after he was assaulted mercilessly by Sajin Vass Gunawardena, the Monitoring MP for the Ministry of External Affairs at a house in New York. 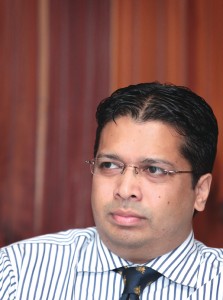 In a highly intoxicated state, Gunawardena MP has get involved in an argument with Nonis. He called him a “bloody pariah” and accused him of using the words “fucking bitch on Kshenuka Seneviratne.” He has raised his hands and given Nonis a thundering slap forcing him to fall on the ground. Thereafter, Gunawardena has continued to kick High Commissioner Nonis. His toe was hurt because of this and he was walking with a bandage.

Nonis did not sit for the string hopper, chicken curry and seeni sambol dinner. He drew to the five star New York Hotel Rajapaksa stayed and gave his resignation. The next morning he took a flight from New York to London.