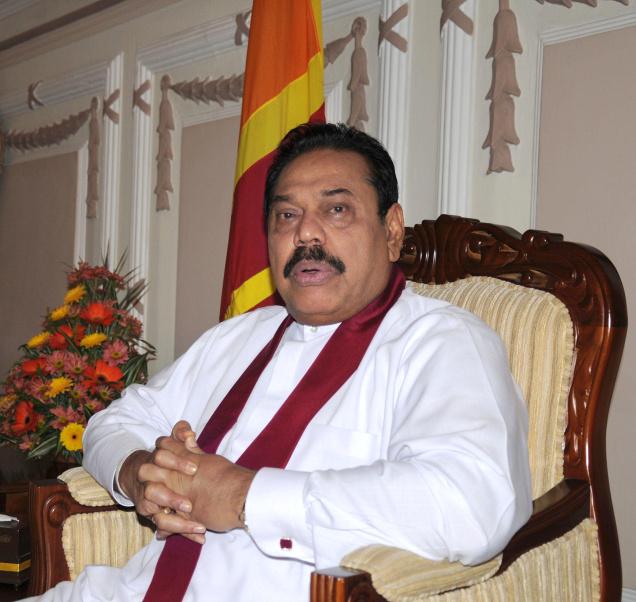 The view that President Rajapaksa is disqualified to contest a third term follows from a reading of the Constitution as amended by the Eighteenth Amendment, read together with the Interpretation Ordinance. A correct interpretation of the Constitution would lead one to the conclusion that the Eighteenth Amendment was only prospective in its operation and despite that amendment President Rajapakse’s disqualification continues.

The Eighteenth Amendment and its effect

President Rajapaksa’s disqualification stems from Article 31(2) as it stood before its repeal by the Eighteenth Amendment. Article 31(2) disqualified a person who had served two presidential terms from seeking office for a further term. Article 31(2) provided that:

This disqualification was reinforced by Article 92(c) of the Constitution according to which a person is disqualified for election as President “if he has been twice elected to the office of the President by the People”.

The Eighteenth Amendment to the Constitution was certified on 9 September 2010 and came into force from that day. The incumbent President was subject to the disqualification prescribed in both these articles at the time the Eighteenth Amendment was enacted. It is a disqualification to which President Rajapaksa and everyone else knew that a person elected twice to the office of President would have been subject. It applied to President Rajapakse because he has been twice elected as President.

The conclusion that the Eighteenth Amendment did not remove the disqualification from which President Rajapakse suffered is one that inevitably follows from the application of section 6(3)(a) of the Interpretation Ordinance, which is reproduced here:

“Section 6(3): Whenever any written law repeals either in whole or part a former written law, such repeal shall not, in the absence of any express provision to that effect, affect or be deemed to have affected-

(a)  The past operation of or anything duly done or suffered under the repealed written law;” (emphasis added).

When section 2 of the Eighteenth Amendment and section 6 (3) (a) of the Interpretation Ordinance are read together, it should follow that the repeal of Article 31 (2) does not affect anything ‘suffered’ under the repealed law.

President Rajapaksa suffered a disqualification by virtue of the repealed Article 31(2) of the Constitution; and its repeal by the Eighteenth Amendment did not, in the absence of any express provision to that effect, remove his disqualification.

Interpretation Ordinance and interpreting the Constitution

Chinthaka Mendis has argued that the Constitution cannot be interpreted by recourse to the Interpretation Ordinance, and suggested that it would be artificial to rely on a piece of legislation enacted in 1901 to interpret the Constitution. Nevertheless, successive legislatures have adopted this Ordinance and kept it under review by making numerous amendments to it and, over the years, Courts have relied on it to interpret laws on whose meaning they have been required to pronounce.

It is also a fact that the Supreme Court has interpreted the Constitution by recourse to the Interpretation Ordinance. For instance, in Visuvalingam v Liyanage, better known as the Judges Case, in which I appeared as junior counsel to the late S. Nadesan QC, a full bench of the Supreme Court presided over byNeville Samarakoon CJ construed the meaning of the word ‘month’ in Article 157A (7), which was introduced by the Sixth Amendment to the Constitution, to mean a ‘calendar month’ by reference to the definition given to that term in the Interpretation Ordinance.

It is, indeed, an odd suggestion to make that Parliament’s own guide to the interpretation of legislation shall have no bearing when interpreting the Constitution. The Ordinance obviates the need to define certain terms or to re-state certain principles every time a law is enacted. Parliament should be deemed to have enacted the Eighteenth Amendment with the Ordinance in mind. Therefore, it is legitimate and proper to interpret the Eighteenth Amendment by referring to the Ordinance.

Where it was intended that a constitutional amendment shall have retrospective effect, it was expressly provided for in the amendment itself, as was done in the case of the Second Amendment by section 3 of that Amendment.

In reality, the function of drafting legislation is undertaken by qualified legal draftsmen who are familiar with the provisions of the Ordinance and the principles of interpretation and whose advice as well as that of the Attorney General would have been sought when drafting the Amendment. It is futile to pretend that the ordinary principles of interpretation do not apply to the Eighteenth Amendment and, accordingly, it is only prospective in its operation.

Chinthaka Mendis has argued further that the principle enshrined in section 6(3) of the Interpretation Ordinance is limited in its application to ‘written laws’ but has no application to the Constitution. His argument is based on the fact that the Ordinance used the terms ‘enactment’ and ‘written law’ and has given them different definitions. To address this point it is necessary to reproduce here the two definitions.

“Section 2(f): ‘enactment’ shall mean any Ordinance, Law or Act enacted by the Legislature of Ceylon or Sri Lanka, as the case may be, and shall include-

(ii)          Any enactment having force or law in Sri Lanka and promulgated in the form of a proclamation or regulation prior to the 1st day of January, 1834;

(iii)        The Tesawalamai or the laws and customs of the Malabars or Jaffna promulgated by the Dutch Government of Ceylon in the year seventeen hundred and seven, and referred to in the Tesawalamai Regulation; and

“Section 2 (kk) ‘written law’ shall mean and include all Ordinances, Laws and Acts of the Legislature of Ceylon or Sri Lanka and all orders, proclamations, rules, bylaws, regulations, warrants and process of every kind made or issued by anybody or person having authority under any statutory or other enactment to make or issue the same in and for Ceylon or Sri Lanka or any part thereof, the Minutes on Pensions, and the Ceylon (Parliamentary Elections) Order-in-Council 1946.”

It is apparent that the term ‘written law’ is defined to embrace a wider category of laws than ‘enactment’ and it included an Act of the Legislature of Sri Lanka. In a separate definition, the term ‘Act’ is defined in the Ordinance to include ‘an enactment of the Legislature of Ceylon or Sri Lanka, as the case may be, enacted on or after the 14th day of October 1947, other than a Law enacted by the National State Assembly’ (emphasis added). As a Law enacted by the National State Assembly has been excluded, then an Act could only mean a law enacted by the Parliament of Sri Lanka. Furthermore, both ‘enactment’ and ‘written law’ have been defined to include the Ceylon (Parliamentary Elections) Order-in-Council.

It follows, therefore, that the two definitions are not meant to be mutually exclusive. The definition of a ‘written law’ is wider than an ‘enactment’ and it does not follow that the inclusion of the Constitution in the latter definition should mean that it has been excluded from the former. The phrase ‘written law’ is defined in the Constitution itself to mean any ‘law’, which in turn is defined to include an Act of Parliament.

The Eighteenth Amendment is legislation that emanated from Parliament and is clearly an Act of the Parliament of Sri Lanka and falls within the definition of a ‘written law’. It might have amended the Constitution but it remains as an Act of Parliament.

Even a cursory glance of the Ordinance would make it apparent that the Constitution has not been excluded from its reach. Take for instance section 22 of the Ordinance, which dictates how a court shall interpret a clause in any enactment ousting the jurisdiction of a court to determine the validity or legality of a decision made under that enactment. That section has a bearing on the powers of the Court of Appeal when its jurisdiction is invoked under Article 140 of the Constitution.

The Interpretation Ordinance as it appeared in the 1956 edition of the Legislative Enactments defined the word ‘enactment’ to include ‘and ordinance as well as an act of Ceylon’. An ‘act’ was defined to include ‘an Act of the Parliament of Ceylon’ as it then was and an ‘ordinance’ too was defined to include an Act of Parliament. Thus, a reader who wished to understand the meaning of an ‘enactment’ was referred back to the definition of an ‘act’. There was no reference to Constitution in the body of the definition of ‘enactment’.

The editors of the Unofficial Revised Edition of the Legislative Enactments 1981 made several revisions to make the Ordinance to make it accord with the intervening changes resulting from two constitutions that followed the 1946 Constitution. In his Preface to the Revised Edition former Justice Deheragoda who headed the team of editors stated that a number of changes were made to the Interpretation Ordinance and that ‘these changes were effected under powers which were to be conferred on the Commissioner revising the Legislative Enactments by the proposed Revision of the Legislative Enactments Bill, which, owing to certain legal and technical difficulties, was never placed before Parliament. These changes therefore, although necessary, remain “unauthorized”…’

For example, the Interpretation (Amendment) Act No 18 of 1972 amended the Interpretation Ordinance by the addition of section 22 which affected the power of courts to pronounce on the validity or legality of certain orders protected by an ouster clause, that is a clause with expressions such as ‘shall not be called in question in any court’. However, the Provisos to that section made the ouster clause inapplicable to the Supreme Court in the exercise of its jurisdiction under the Courts Ordinance in respect of certain matters, a jurisdiction which is now vested in the Court of Appeal in terms of Articles 140 and 141 of the Constitution, and the reference to the Courts Ordinance will have to be read as a reference to the Constitution 1978. Therefore, the editors have made changes to this section to reflect this change. In any event, section 22 will have to be read in this way even if the editors did not make these changes because of the application of themutatis mutandis rule.

Similarly, the definitions given to the words ‘enactment’ and ‘Act’ will have to be read with modifications, if necessary. However, what the editors did was to insert into the body of the definition of ‘enactment’ the words referring to the 1978 Constitution. Apart from the fact that this insertion was unnecessary, arguably it was not justified by the mutatis mutandis rule because it amounted to more than an alteration in detail, especially where previously in that definition no express reference was made to any law.

Hence, the definition of the term ‘enactment’ in its present form does not lend a proper and justifiable basis for the argument that the Ordinance does not apply to the interpretation of the Constitution.

In any event, in the writer’s view, it is clear that the reference to the Constitution of 1978 in the definition of ‘enactment’ is mere surplusage and cannot displace the compelling arguments for including the Constitution in the wider term ‘written law’.

*Dr Reeza Hameed is an Attorney-at-Law