The ONLY reason, the Muslims may not vote for President Rajapaksa, would be the Bodu Bala Sena and other Buddhist extremists who have unleashed so much violence and intimidation against the Muslim community during the last three years, starting with the destruction of a shrine in Anuradhapura to the pogrom of Aluthgama. There are over 350 incidents against the Muslims that have been recorded by the Secretariat for Muslims

The Muslims have stood by the country throughout history, and more so during the ethnic war between the Tamil tigers and the government forces by being the buffer for the government forces against the ruthless tigers. For this, they paid a heavy price by being forcible evicted from the North with less than 24 hours notice. They were not allowed to take any of their valuables along. They are still languish in refugee camps in different parts of the country, labeled as old IDPs, they have limited access to any form of relief for resettlement in their former homes.

The Tamils, probably will not forgive the Muslims for standing by the government forces and betraying the Tamil speaking identity yet, the Muslims became the target of a hate campaign by Buddhist extremist led by the Bodu Bala Sena.  The rhetoric of the extremists seems to be, “we have finished off the Tamils, and now we need to finish off the Muslims”. 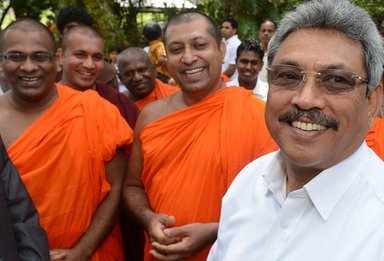 President Mahinda Rajapaksa, who was able to win unprecedented support from the Muslim community, especially during his second term in office, lost all of it and more because of  the hate campaign of BBS.  President Mahinda Rajapaksa probably lost most of the Tamil votes due to the war, but the loss of the Christian and Muslim votes were purely because of the Bodu Bala Sena, Sinhala Ravaya, Ravana Balaya and other extremist Buddhists. It is indeed tragic that President goes in to an election where he probably is down by 30% of the votes, because of the anti minority campaign by BBS.

The President and the government may have seriously miscalculated the threat posed to them by these Buddhist extremists. They probably assumed that the emergence of these radicals would be an insignificant nuisance, but it has now alienated not just the Muslims and Christians, but a large number of the moderate Buddhists who believe in ethnic harmony and a peaceful Sri Lanka. Whatever gains the president may have accrued due to the Buddhist chauvinism, the loss of the block minority votes would in no way compensate.

What demands serious consideration is, the rhetoric of these misinformed Buddhist monks who claim that the Muslims intermarry and breed like rabbits, Halal complaint food is something that has been sacrificed to Allah, far too many mosques are being built, probably to accommodate the large conversions envisaged, Sri Lanka would become a Muslim country like Indonesia, Maldives etc., they are buying property through support from Arab nations and the Muslims are kingpins in the drug mafia . What crap?

I do not deny that there are Muslims involved in the drug trade, but they are insignificant minions who are mere couriers paid handsomely for a trip to the Golden triangle or crescent with almost guaranteed safe passage by the drug mafia and their protectors.  Once in a while, when a minion is arrested, the racist media would carry banner headlines – A Muslim was arrested with 100 grams of heroin. Have you ever seen a banner headline – A SINHALA BUDDHIST arrested for …..?

Who are the kingpins of the drug mafia, they are not certainly Muslims. Who controls enforcement? Are the IGP, the Chief of Customs, and the Chief of Narcotics control, Muslims? No, all of them are Sinhala Buddhists.

Another claim that they have is that Muslims are building far too many mosques. There are over 200,000 registered taverns and bars in the country. The figure would be three folds if you take all the illicit ones in to consideration. Will having 2000 mosques in the entire country pose a threat to the well being of the people?  Mosques are not bars, brothels or casinos. They are places where the  Muslim children learn their religion. They are similar to the Sundayschools, or the daham pasala.  Further, it is obligatory on Muslims to pray 5 times a day as a congregation to the best of their ability.  This cannot be done in private homes, hence the need for a mosque or prayer center wherever the Muslims live.

Conversation to Islam by the local population in a number of our neighboring countries was never by the sword. Either the leadership embraced Islam and the subjects followed or they believed in Islam because of the exemplary lifestyles of the Muslims of that era. There has been no record history of forced conversions by Muslims anywhere in our neighborhood.

It is time, our president dispelled these myths and start reigning in these extremists who are destroying the peace that we rightfully deserve as a nation. The president, at the end of the war in 2009 had the opportunity of embracing the Tamil population with a true reconciliation process, but failed. It is time that he doesn’t aggravate the situation further by alienating the rest of the minorities from him.  He still has the chance to win the minority votes by reigning in the Sinhala Buddhist extremists and build a truly united Sri Lanka for all Sri Lankans. His commitment and immediate action will certainly swing the minority votes towards him and probably give him his third term.