Mayuri Inoka, the wife of a disappeared husband, Madushka Haris De Silva, was herself abducted on 1 November 2014. According to Mayuri, her abductors threatened her not to engage in any activities calling for the recovery of her husband. Mayuri’s husband disappeared in September 2013, and remains missing. 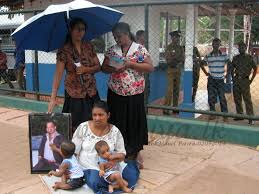 Issuing a statement the Asian Human Rights Commission says; On 27 October 2014, Mayuri spoke at a public gathering in front of the “Monument for the Disappeared” at Raddoluwa, Seeduwa, during the annual commemoration ceremony for disappeared persons.

The persons who abducted Mayuri identified themselves by stating, “we are from the police” They followed her and boarded the three-wheeler in which she traveled to the city centre in Anuradhapura, where she wanted to purchase milk powder for her 11-month-old twin babies.

According to Mayuri’s statement, broadcast in BBC’s Sinhala Service, a well-built man, pointing a gun at her face boarded her three-wheeler, tied her hands behind her back, blindfolded her, and took her in a three-wheeler. Later, she was shoved into a van. She was driven around for about an hour and half in this van, a period when she was continually abused and threatened by her abductors, who asked her “not to engage in the campaign and protests to find her husband”.

She has recalled that, several times, one of the abductors aimed a pistol at her neck and threatened to shoot her. Mayuri says she was terrified and feared for her life. She was repeatedly told that “she will also be taken to where her husband is”, if she continued to search for him, which, in fact, is nothing other than an assassination threat. Mayuri was finally thrown out of the van, onto the roadside near Nochchiyagama.

Talking to BBC Sinhala Service following her ordeal, Mayuri says that when she was thrown out by the side of the road, with her hands still tied behind her back, and yelling for help, no person came to her assistance. Later, after sometime, several police officers in civilian clothes arrived and abused her in foul language, threatened her, and treated her as if she were a prostitute.

She has named Senior Police Superintendent Mahesh Senarathna and a group of other police officers as those who are involved in the abduction of her husband. She has complained to the police and to the courts about this disappearance and about whom she thinks is responsible for the disappearance.

It is obvious that a group of police officers, afraid of being discovered for involvement and links to the disappearance of Madushka Haris De Silva, are pursuing her in order to intimidate her and to silence her.

Given previous experiences in similar incidents, it will not be a surprise if Mayuri will be assassinated.

The Asian Human Rights Commission calls on the Inspector General of Police and all government authorities to immediately inquire into Mayuri Inoka’s abduction and the constant threats that have been levelled at her and her children by persons identifying themselves as “police officers”.

Meanwhile the AHRC also calls upon the Inspector General of Police to provide special protection to Mayuri Inoka and her children.

The AHRC particularly calls upon the women’s movements in Sri Lanka to come to Mayuri Inoka’s assistance and to prevent her possible assassination. The AHRC also calls upon all human rights organizations to do everything they can, to provide for her protection.

The AHRC will also take steps to bring this matter to the attention of the United Nations Human Rights agencies and the diplomatic community in Sri Lanka.