(November 03, 2014, Bradford UK, Sri Lanka Guardian) As both our President and newly elected TNA look longingly at India to come to their rescue, it is time to ponder on what it has to offer by way of a political settlement to the ethnic issue post-war.
India is a paradox. It is like the manor-born dowager with silver and a coat-of-arms but who has no meat to place on her mahogany table for dinner guests. Modi honeymoon is over and he has to deliver to the 1.2 billion Indians whose majority still live in abject poverty despite its space programs and nuclear technology. 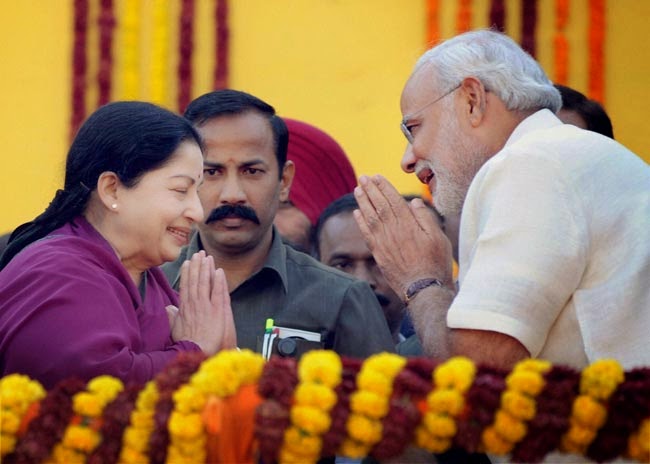 It faces the challenges of poverty, corruption, malnutrition, inadequate public healthcare, and terrorism. It also is a nuclear weapons state and a regional power and it has the third-largest standing army in the world and ranks ninth in military expenditure among nations. India is a federal constitutional republic governed under a parliamentary system consisting of 29 states and 7 union territories. India is a pluralistic, multilingual, and a multi-ethnic society. It is also home to a diversity of wildlife in a variety of protected habitats.
Narendra Modi’s ascendency to premiership is fraught with his history of anti-Muslim sentiments as was seen in on 27 February 2002 when a train with several hundred passengers including large numbers of Hindu pilgrims was burned near Godhra, killing around 60 people allowing rumours that the fire was carried out by Muslim arsonists, anti-Muslim violence spread throughout Gujarat. Estimates of the death toll ranged from 900 to over 2,000, while several thousand more people were injured.
Modi’s involvement in the events of 2002 has continued to be debated. Several scholars have described the events of 2002 as a pogrom, while others have called it an instance of state terrorism. Summarizing academic views on the subject, Martha Nussbaum stated that “There is by now a broad consensus that the Gujarat violence was a form of ethnic cleansing, that in many ways it was premeditated, and that it was carried out with the complicity of the state government and officers of the law.”
In 2012, Maya Kodnani, a former minister in Modi’s Government from 2007–09, was convicted of having participated in the Naroda Patiya massacre during the 2002 riots. She was both the first female and the first MLA to be convicted in a post-Godhra riots case. While initially announcing that it would seek the death penalty for Kodnani, Modi’s government eventually pardoned her in 2013 and settled for a prison sentence.
Mahinda Rajapaksa draws parallel to Modi in his handling of ethnic minorities. Both are nationalists to the core; Modi with his Jai Hindu adherence and Rajapaksa with his trump card of Sinhala Buddhist hegemony are both perceived as religious zealots while on the surface appearing to accommodate minorities. The latter’s insouciance to the mayhem caused in Aluthgama and elsewhere against Muslims and even welcoming the Buddhist monks who orchestrated the violence resulting in their properties and businesses looted and burnt stands testimony to the government’s stance vis-à-vis minorities.
TNA (Tamil National Alliance) is seeking India’s support which prevaricated at the UN when it half-heartedly agreed war crimes were committed and need to be probed and at the same time asking Tamil politicians to back the President and negotiate with the government since the ethnic war was an internal problem.
The misery of the three and a half decade old ethnic war was brought to an end by fair means or foul. Thousands perished and many thousands left without lands and means of sustenance following the horrible saga in Mullivaikkal in May 2009 which was supposedly a war without witnesses.
But survivors of the war are scattered across the four corners of the world and it is to mete out justice to victims they need witness protection as they provide UNHRC the necessary information to ascertain the full scale of genocide amounting to eugenics as practised by Hitler and subsequently by the West in their many wars across the globe against those they perceived to be a threat to their existence and national interests.
Finally we have an erudite politician in Northern Provincial Council Chief Minister and former Supreme Court Judge C.V. Wigneswaran who is coming under scathing attack from Tamil media and politicians for his forward and far reaching thinking and not giving in to knee-jerk reaction. Given his maturity and scholarship with experience as a judge he should not be vilified however stubborn he appears to be; since Tamils need his statesman-like leadership which they did not have for decades. He is not for a Band-Aid solution to the ethnic problem but a permanent one and with Sumanthiran, Sampanthan, Mavai Senadhirajah et al by his side and he can achieve this only if the warring Tamil politicians shed their differences and co-operate with the CM.
Tamils have had cowboy politicians for decades who could not see beyond their own narrow goals and material gains which are not exactly in the interest of their future well-being and aspirations. Once ensconced as the leader of Tamils following the July pogrom of 1983, Velupillai Pirabhakaran lost the plot and set about annihilating dissenting Tamil rebel groups which led to his final demise and the misery of thousands of Tamils in Mullivaikkal.
How CVW will checkmate Mahinda Rajapaksa regime remains to be seen. Both are banking on India to bring a negotiated settlement while looking over their shoulders since India has not taken a firm stand on the ethnic issue so far. PM Narenra Modi’s honeymoon period is over and now he has to deliver and Sri Lanka is further on his agenda to say the least.
(The writer has been a journalist for 25 years and worked in national newspapers as sub-editor, news reporter and news editor. She was Colombo Correspondent for Times of India and has contributed to Wall Street Journal where she was on work experience from The Graduate School of Journalism, UC Berkeley, California. Currently residing in UK she is also co-founder of EJN (Exiled Journalists Network) UK in 2005 the membership of which is 200 from 40 countries. She can be reached at pearltheva@hotmail.com)