The blatant abuse of power by the Rajapaksas to score votes in the South has prompted further escalation in the Sinhala colonization in the North – JVP MP Vijitha Herath has informed in parliament yesterday that a large number of families from Hambanthota have been given away lands and resettled in the North. 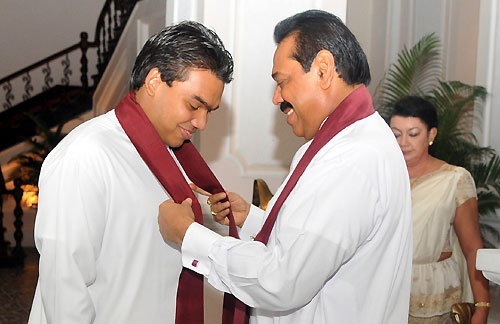 According to MP Herath a land area of one acre has been given to every family that was resettled in the North from Hamabanthota and this village has been named as ‘Namalgama’.

MP Herath who disclosed these facts during his statement at the debate on 2015 budgetary allocations for the Ministries of Defence and Law and Peace, had pointed out that these actions are being carried out to gain political mileage against the backdrop of the upcoming Presidential elections.

Speaking further he had stressed on the importance of establishing and reinforcing land rights in the Northern Province, emphasizing on the ‘Namalgama’ incident as a case in point.

The Rajapaksas have been using the land in the Northern Province according to their whims and fancies particularly in their voter bribery projects. This fact was further highlighted by Northern Province Chief MinisterCV Wigneswaran when he wrote to President Rajapaksa earlier last month explaining the decision made by the Board of Ministers of the NPC to boycott a development meeting organized as part of the President’s visit to Jaffna. He had criticized the giveaway of land permits to some 20,000 persons by the President, pointing out he was not consulted nor informed of this decision at any point despite him being the Minister in charge of lands in the province.