Rajapaksa Is A Henahura (Harbinger Of Evil) And A Hora (Thief)

Former Chief Justice Sarath N. Silva during an emotional speech today described President Mahinda Rajapaksa as ‘a harbinger of evil’ (Henahura) who has made a thundering blow against the law of Sri Lanka and added that this attack will surely boomerang. 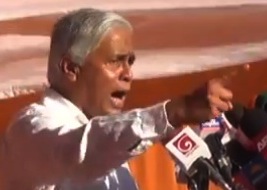 Ex-CJ Silva addressing the gathering at a public rally held at the Muttiah Park today made these remarks as he stringently crticised the Supreme Court opinion given on the constitutionality to contest for a third term as per a request by President Rajapaksa, while he described the judgement as one ‘lacking in transparency’ and a ‘corrupt point of view’.

“It seems the Supreme Court judges have worked in great haste to deliver the verdict to the request made by President Rajapaksa in great secrecy to the CJ. The SC was literally allowed only a few hours to deliver this judgement as a result of the weekend and the poya holiday last week. However despite  time restrictions, Nimal Siripala Silva delivered it before the parliament yesterday! Nowhere in this world has a Supreme Court decision been delivered before the parliament. Is this respect or disrespect for the country’s law?,” Silva questioned the public. He went on to criticise the judges who gave the verdict as he stated that such individuals need not station themselves at Hulftsdorp but should instead remain in a small room within the premises of Temple Trees so they they can freely manufacture verdicts that suit the whims and fancies of the President.

He went on to state the judgement is also not a cause for surprise since as it was Peiris who as the then Attorney General helped draft the 18th amendment in order to remove the legal restrictions that prevented Mahinda Rajapaksa from contesting for a third term of Presidency.

“We are left with no other choice than to expect a sense of justice from the judiciary although we were aware of the outcome. But as the public we can do one thing – the power of the judiciary lies in the hands of the masses. So I urge the public to take a stand against these blatant injustices and right these wrongs at the upcoming Presidential elections,” he added while adding it is time to save the country from shawl-donned thieves.