by Nilantha Ilangamuwa
(November 15, 2014, Colombo, Sri Lanka Guardian) To say that the President of Sri Lanka is greedy is no lie. Having scammed billions of rupees out of various deals with arms sellers, investors and government funds there is no doubt that he and his brothers have earned the nicknames. Now he wants to continue his reign unchallenged. He will never give up his desire for a third term in order to control over 20 million people to fulfill his personal desires. He is spending near to a billion rupees of public funds for his pre-election campaign and millions more to buy people who, otherwise, might have had a real, authentic reason to oppose him. 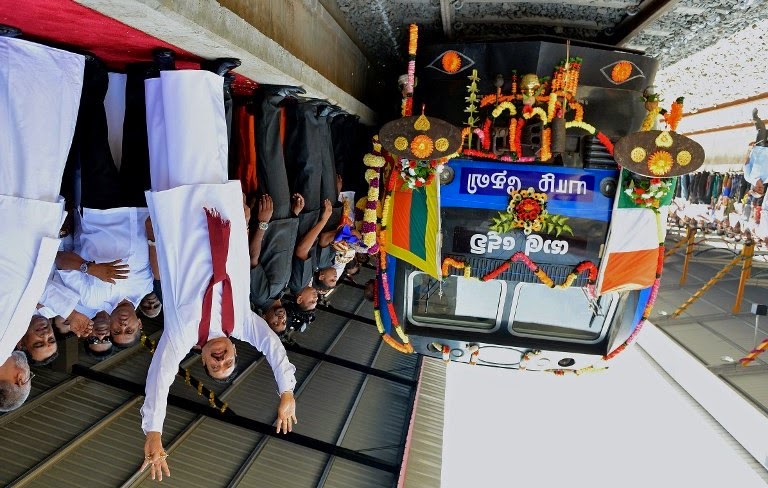 At present the election in Sri Lanka is nothing than a money game. It is nothing more than a deception to show the international community that democracy exists in Sri Lanka. Of course, it is Mahinda Rajapaksa democracy, but the man himself is oblivious to the idea that anyone in the West might realise this. Such is his self-delusion.
One of the best examples is to look at our travel documents and the reputation earned over the years. It was not a plot designed by the imperialists to curtail our movements. It must be asked, if Rajapaksa is so well respected abroad why can we not travel to China, the mango-partner of the ruling party.
Meanwhile, there are no surprises from the judiciary. It was to be expected that the Supreme Court would rule in favour of Rajapaksa contesting a third term. Today, Sri Lanka is harvesting what it cultivated in the name of phony patriotism. Now the citizens are being forced to eat ideological poison in order to protect the tyrant that they put in power. It is this tyrant who is using the rights of the people to protect his own evil power.
Now it is our duty to find a way of get rid of the tyrant. It will not be the first time nor the last time in human history that the rights of the people have been used to uphold the tyrant.
Anything can happen in a society of distorted morality.
However, the only hope the people have of overcoming the tyrant will be if they stand together. This calls for a desire to overcome the situation once and for all.
The people have to eradicate self-justification by comparisons with extremely violent decades faced in the past. It requires a plan and the plan should be designed not to just hide the scars of the wounds of the nation but to cure the disease that the nation suffered since its beginning.
Giving a third term to the tyrant is testing the degree of distorted morality of the society, but the real cost of it will come years later as we are still paying the cost for the power produced in the late 70s.What we are feeling and sensing now is that independence is fast becoming a very bad joke.
My query to my motherland is, Sri Lanka, Quo vadis?