For those who believe in astrological predictions, the major Saturn change on 2 November 2014 for his Aeris Raasi is definitely not helpful for him.  According to general predictions- Overview:

‘Sani Bhagawan is moving from the 7th house to the 8th house. You are coming out of Kandaka Sani but entering onto the worst part of Asthama Sani. Right now things are bad, but going forward it will become worse and terrible. You may expect to have problems in each and every aspect of your life. The intensity of the problems will be extreme from Dec 2014 to July 2015. You will have good relief when Jupiter is moving onto your Poorva Punya Sthanam by July 2015. Overall, you cannot expect any good results from Saturn, but other transiting planets can help you. Avoid doing any kind of investments for the next 3 years. Even though Jupiter is in your favourable spot for one year, you need to take my predictions to make sure you are prepared for the worst and hope for the best. Otherwise you do not need to continue reading my predictions from this point ( KT Astrologer – Network Bandwidth Monitor). 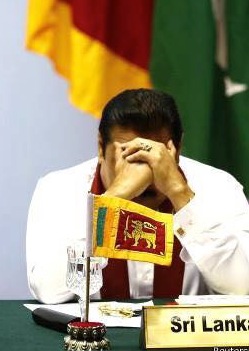 Detailed predictions do not give any hope for Mahinda Rajapaksa for next two and a half years.

He could have patiently carried on with his present Presidential term for a further two years, but the power hungry President, worried about his stakes in two years time, decided to manipulate his way through to out beat his astrological change, thinking his constitutional power of even ‘making a man a woman and woman a man’ will be in his favour to call the election.

Having gone to the extent of punishing the astrologers for making adverse predictions for him in the past, there is no one to teach the power intoxicated President some simple arithmetic, based on available statistics of presidential and legislature elections.

In 2005, Mahinda Rajapaksa secured a little over 50% of the popular vote against the main opposition rival Ranil Wickremesinghe. Turnout was put at 74% in the south and west, but almost no Tamils voted in some minority Tamil areas due to Tigers preventing them from voting, allegedly due to them being bribed by Mahinda Rajapaksa. He won his first presidential election in 2005 by just over a razor thin margin of 180,000 votes.

In 2010, Mahinda Rajapaksa secured re-election by a clear margin, winning around 58% of the vote; an estimated 74.5% of the electorate cast their ballots and the victory margin was over 1.8 million votes. The 2010 election was a significant one as the hyped up slogan of Mahinda was his drum beating claim of his decisive victory over the Tamil Tigers. As the constitutional Commander in Chief of the armed forces, he was challenged by his former Commander of the Army Gen Sarath Fonseka. Mahinda was able to gain the 8% vote from the opposition UNP vote bank in the election. His war victory did not give him the absolute margin of 75% – 90% despite the nationalist parties joining Mahinda to hard sell his war victory hysteria.  Mahinda was only able to increase the overall voter turnout by 676,574 i.e., 0.77% (under 1%).

The 2015 Presidential election will be a testing time for Mahinda. There will be multi-pronged impacts on the vote pattern this time. Hypothetically, if UNP vote bank is the average of the last two Presidential elections of 44.9%,  in the present declining political climate for Mahinda it is not difficult to predict the outcome at the election. Maithiripala Sirisena has to score a simple 5.1% to hit the 50% break-even point.

Muslim vote is also significant in the election. Having been battered and bruised by the Mahinda Rajapaksa’s right wing anti-Muslim campaign, the Muslim masses are not in the pious mood to support him. Sri Lanka Muslim Congress and its allies have become irrelevant for the Muslim masses. Even if Mahinda promises hope from hell for the Muslims, they are unlikely to vote for him. The lame duck SLMC has to respond to the mood of the Muslims and will join force with the opposition to earn some credibility from the Muslim people.

With the fever pitch campaign following filing of nominations, the political and astrological turf for Mahinda unfortunately will not be friendly. With the amazement of wealth and arrogation of unlimited power, anything could happen if the election fails for Mahinda.

There is a strong possibility that Sri Lanka will experience its first ever coup that will undermine the democratic will of the people.

Mahinda & Co have fully prepared the contingencies and 8 January 2015 will be crucial for Sri Lanka to either swim out of troubles or to sink in the slumber.