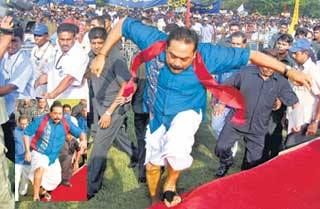 Why would Shashindra Rajapaksa – or any other chief minister/minister/parliamentarian – need security convoys?

The LTTE is no more. The government boasts that the country is at peace and demands that people vote for Mahinda Rajapaksa, again, for this reason. So why the ubiquitous sight of politicians and their massive security details driving at breakneck-speed, signals flashing and sirens screeching? Why speed as if Satan himself is after them, ignoring traffic lights and every other road rule, and endangering lives and limbs of fellow citizens?

It may seem an insignificant detail in a country mired with far more horrendous and colossal problems. But this unnecessary, illegal and dangerous habit is symbolic of a mindset which is responsible for many of Sri Lanka’s macro-ills.

Power not just corrupts; it also turns the heads of the powerful until they think they are a breed unto themselves. In functioning democracies, such politicians come down to earth when they are voted out. This was always the case in Ceylon/Sri Lanka. Until 1977, almost every election produced a new government. Even afterwards, the term-limits provision provided an essential dose of reality to the powerful.

With the 18th Amendment all restraints vanished. Now rulers can realistically hope to rule for life.

Little wonder that their sense of entitlement is becoming so total and absolute.

Security precautions, however excessive, made sense so long as the LTTE was alive. Now the Tiger is gone and the rulers and their kith and kin do not face any serious threat. Logically, the extraordinary security precautions should have been scaled down post-war. Instead, against all logic, they remain. They remain because they no longer need a reason. They have become a way of life for the powerful (and their minions) – a symbol of their absolute sense of entitlement, an expression of the belief that they are a special-breed and a manifestation of fact that laws and limitations do not apply to them. The country is their legacy, their playground, their private cornucopia. They are the eternal, infallible adults; ruling over their eternally juvenile subjects is their right and responsibility.

Under Rajapaksa rule, dishonour is becoming honour, dishonesty honesty, indecency decency, extremism moderation and indiscipline discipline. But then is any upending impossible for a regime which turned the war into a humanitarian operation with zero-civilian-casualties and open prison camps into welfare villages?

Perhaps nothing highlights the appalling state of the new normal than the President’s public mention of ‘The Files’. The President is saying that his underlings have committed crimes and he will protect them so long as they support him. He has the evidence to be used against them, but he will not make use of the evidence so long as they stay with him. They will be punished only if they turn against him. So long as they remain his acolytes, they are safe.

The President has proclaimed that for him law is just a tool to be used to punish opponents and shield supporters.

This is our President, the head of our state and government, and our commander-in-chief! A man who, by his own tacit-admission, is devoid of honour or shame. A man who protects criminals and uses evidence as tools of blackmail. And this president wants a third term! If we allow it to happen, we should erect a Shame Pole for ourselves.

How can the rule of law survive in Sri Lanka under such a president?

What sort of new generation will this country breed, with such a leader at the helm?

Already we have a minister who states, publicly, that the electorate should vote for the UPFA because the UPFA has plundered to its heart’s content and does not need to plunder anymore[ii]. Going by the same logic, serial-criminals should be set free once they have committed enough crimes.

At a recent public meeting, Minister Janka Bandara Tennakoon recalled that once he complained to the President about the illegal conduct of a UPFA politician in his area. According to him the President said, “This man should be kicked out” (Mu thiyanne vatinne ne). But of course he was not kicked out[iii]. He remains a powerful being; he wallows in riches and privileges; he is seen by society as a success.

The opposition may or may not be able to usher in good governance. But the Rajapaksas cannot. A third term will only serve to enhance their sense of entitlement and their belief that the national moral-ethical clock should be set by their own monstrous moral-ethical timepiece.

Many compulsions can make a collective opt almost instinctively for silent compliance. Fear is not just fear of repression but also the fear of violating dominant opinion, the ruling commonsense. David Hume pointed out that the many are governed by the few and citizens willingly submit to their rulers because the rulers have ‘opinion’ on their side. “It is, therefore, on opinion only that government is founded, and this maxim extends to the most despotic and most military governments as well as to the most free and most popular.”[iv]

And the Rajapaksas are trying to cajole/force us to accept a set of opinions which are beneficial to none but themselves. Their offering to us is a pill, consisting of abuse and illegality of every sort, and covered with a rich marchpane of patriotism. They are telling us scary stories about enemies and threats so that we become too frightened to look beyond the rhetoric and glimpse the truth.

For example, of how they really treat real-life ‘war-heroes’.

Early this year, a group of disabled soldiers filed a case, asking the army to pay the salaries they are legally entitled to. Initially the army promised to do so. But this week, the army filed objections asking the judge to dismiss the case. As the head of the Disabled War Heroes Association, PVS Shanta, said, “This is a great injustice. We are the real war heroes.”[v]

So why are these disabled soldiers not being paid the salaries they are entitled to legally? It cannot be lack of money – after all this is a government which is spending Rs.54,000 million (Rs.54 billion)[vi] to build an expressway between the deserted Rajapaksa Airport and the Rajapaksa Port which would have been deserted, if not for the vehicle-carriers compelled to berth there, by government orders. The truth is for the Rajapaksas ‘war-heroes’ are nothing but a necessary means to their sole end – power for family, for life.

Rajapaksas are power-addicts; and they will sacrifice anything/anyone to keep feeding their habit.

How a post-Rajapaksa government will conduct itself is uncertain. But there is no uncertainty about what will happen if the Rajapaksas win. Their ethics and morality will go national. And we will have a new generation incapable of seeing anything wrong in corruption, repression, abuse or impunity because that is the only normal they know.

[iv] Of the First Principles of Government