The Progressive Forum in Colombo has highlighted the importance of Tamil speaking minorities recognizing the crucial nature of the upcoming Presidential elections and on why they should vote for the common Opposition candidate Maithripala Sirisena. 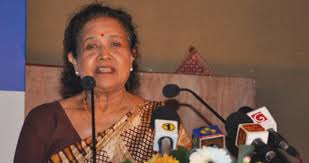 Issuing a statement in light of the upcoming elections, the Joint Convener of the PF, Dr.Selvy Thiruchandran has noted that in working towards a political solution for the Tamil speaking minorities through a devolution-based solution within a united Sri Lanka, it is important to refrain from isolating and focusing on a single race based issue.

It has listed the following points as some of the reasons that should be considered by the Tamil speaking minorities, to vote in favour of the common candidate:

–         Proposals of the common Opposition movement to promote a more democratic parliament, independent judiciary and a less corrupt administration are of considerable significance to Tamil speaking minorities as well

The PF in Colombo has therefore stated that all Tamil speaking minorities should actively engage in all crucial national issues common to all people of Sri Lanka and consider the upcoming presidential polls as one such challenge.

We publish below the statement in full:

The progressive forum, Colombo, has issued the following statement on the Presidential Election. Date: December 17, 2014