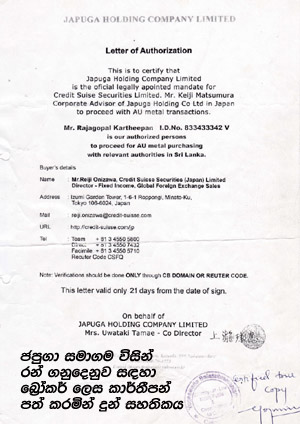 (Lanka-e-News-27.Dec.2014, 11.30PM) The Rajapakse family had planned to flee the country in the event their conspiracies are unsuccessful . One of the conspiracy is to cause a bomb explosion in Colombo on the 6 th or 7 th of January 2015 , and blame it on the LTTE , with a view to earn the sympathy of the people and show that Mahinda Rajapkse had won by a majority of 300,000 votes , according to detailed reports reaching Lanka e news inside information division, and based on all the news garnered by our division.

It is the most infamous senior DIG Anura Senanayake who had undertaken this contract. Mahinda Balasuriya the secretary to the Ministry of law and order is also to render assistance to Senanayake , in addition to the Rajapakse regime ,to execute this plan, which information had unfortunately for the Rajapakses has leaked out already. It is significant to note that this plot of Anura Senanayake had not received any support from other DIGs as well as the IGP. Consequently , these vote rigging and election frauds planned by the regime have failed so far.

In like manner the conspiracy to rig votes has also been unsuccessful. Full information and details of rigging of election results and the methodologies to be adopted by the Rajapakse regime are in the possession of Lanka e news. According to these machinations , the final fraudulent election result is to be conveyed as though Mahinda has won the elections by 303,966 votes . (We have in our custody the concocted results on district basis that are to be conveyed to the people by the Rajapakse regime which we shall not reveal now, as that is too long and space consuming) . Sorry to state however, these riggings and frauds aimed at by the Rajapakse regime have not received any support from the elections commission secretariat, and these Rajapakse treacherous plans and manipulations have even been leaked out by them.

At any rate , at this forthcoming election , the opposition has taken a decision to operate an alternative (parallel) vote counting center to combat the regime’s fraudulent election practices and vote rigging , and prevent them. At the same time as the elections department is conducting the vote count , the opposition is to run the alternative (parallel) center for counting the votes with the aid of international sophisticated system and technology .

In the circumstances , since the Mahinda Rajapakse plans and plots to rig votes and commit election frauds in order to show to the people that he has won with a majority of 300,000 votes had turned into a damp squib so far , they have made arrangements to flee the country which is the only option left for them.

Based on informed sources of the Diplomatic circles , if Rajapakse regime team is unable to use the Sri Lankan planes ( which impediment it is naturally expecting) , the regime has already made arrangements with two Indian Charter plane companies to get down planes , for which the regime has paid in full to these companies.

One of these companies is ‘Air Charters India’ while the name of the other company is still not definitely known. The payments to these companies have been made by Sajin Vaas Gunawardena . (Sajin Vaas had flown to Singapore yesterday). ‘Air Charters India’ had informed that it must be notified at least 12 hours ahead if it is to send a plane to Katunayake or Mattala airport . In any case , payments have been made in full to two Indian charter companies in order that if one company fails to comply with the request urgently , the other company can be relied on as a stand by.

The Rajapakse family that is planning to make a bolt overseas has already sold 350 tons of gold in the country it has robbed , to a Japanese millionaire whose name is Keiji Matsumura . The latter representing a Japanese Company , Japuga Holdings Private Ltd. had bought the 350 tons gold. It is a Tamil national by the name of Rajgopal Kartheepan (identity card No. 8334333342 V) who has acted as a broker as his elder brother who lives in Switzerland had appointed Kartheepan to act on his behalf.

This quantity of gold had been illegally shipped via 16 containers loaded at the Colombo Port . Priyath Bandu Wickrema , the Ports chairman had seen to it this commodity is shipped without it being recorded in any of the registers. The cash amount realized by the Rajapakse family out of this shipment is US dollars 38000.00 per kilo . One ton is made up of 1000 kilos . Accordingly the total amount collected by the sale is US dollars 13,300 million..! and this transaction had taken place with the knowledge of HSBC bank.

Rajapakse who has planned his fleeing the country , made a visit to the Thirupathy Temple(Kovil) immediately after handing over nominations not for paying homage , but to ensure the secret dispatch of the gold and monies , reports say. The Thirupathy Temple (Kovil) is well known world over for large collections of unofficial monies and gold. This Kovil lends monies even to the Indian government . At the same time it is involved in transfer of monies of multi -millionaires through the Undiyal system (illicit fund transfers). It is very evident that Rajapakse made a beeline to that Kovil for such an illicit transaction , that is ,out of love for money and not due to love for the deities , or to perform a genuine pilgrimage .

It is specially worthy of note that though Tissa Attanyake accompanied Mahinda , it was only the latter and Yoshitha, the son of Mahinda who went into the Kovil and met the Kovil bigwigs . Lanka e news is in possession of a wealth of information in this regard which will be released after 8 th January 2015.