Each year since 2009 friends, colleagues and family gather at Lasantha‘s grave site to pay homage to a fallen hero. It is human nature to revere a person after his death. This is more so in Sri Lanka. Whilst alive practicing his profession Lasantha was vilified, assaulted tied up in a myriad of litigation and finally assaulted. He died defending his right to express an opinion as is enshrined in our Constitution and to lay forth information before a public who paid to buy the Sunday Leader. 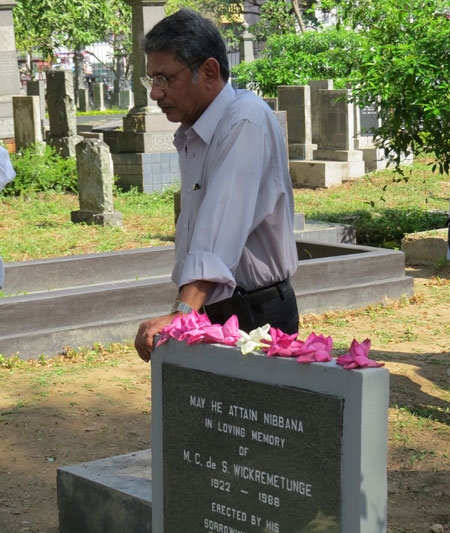 As Lasantha’s grieving daughter Ahimsa wroterecently it is ironical that President Mahinda Rajapaksa decided to seek an unprecedented third term on the 8th of January 2015. This third term is the stepping stone to trigger an incumbent President in seeking multiple terms in office consequent to the restrictions placed by bringing in the 18th amendment to the Constitution.

It is opportune to enlighten the reader that the incumbent President knows first hand the emotions of family members who have lost a parent, sibling or an offspring. I would rather say….almost, as far as he is concerned. His brother the Secretary of Defence, Gotabaya Rajapaksa was targeted by the LTTE whilst being driven in a bomb- bullet proof car in Colombo a few years ago. A badly shaken Gotabaya Rajapaksa raced to Temple Trees in blood soaked clothing to be hugged by a much relieved brother President Mahinda Rajapaksa. Massive bill boards dotted the country depicting this emotive moment. I believe President Rajapaksa yet relives that moment and the anxiety that he went through. I also believe that he as a consequence is aware of the emotions of Lasantha’s family and the need to bring closure into his murder. Therefore he nor his family will find fault with Lasantha’s family for insisting that justice is done or pursued till it is concluded as is required by law.

Many a friend and acquaintance tell me that I should forget, forgive and move on. I would. But Lasantha’s killers roam free. No bill boards nor cut outs can pacify a family seeking justice for a murder most cowardly. Not until there is legal closure.

President Mahinda Rajapaksa did tell me more than once that Gen Sarath Fonseka was behind Lasantha’s killing. That was at a time Gen. Fonseka had announced that he would contest President Rajapaksa for the Presidency. There was a time lapse between Lasantha’s murder and the Presidential election. I did ask him why he did not pursue action against the General for murder instead of using trumped up charges for seemingly innocuous offenses. The answer was incoherent but once he did say that i should bring forth evidence. Others in authority said that it would demoralize the Army. It is implausible that the President of this country and others within the chain of command, who knew exactly where Prabakaran was, where KP was, is unaware as to who killed Lasantha. And who gave orders to do so. I have been informed by authority that the perpetrators did not mean to kill Lasantha but went “over the top”. This too proves that many are aware as to who killed Lasanatha, but dare not volunteer information into a murder as required by law out of fear. Or do they feel that Lasantha deserved to be murdered?

It is a fact that none of the assaults nor killings of journalists have been successfully prosecuted. Some even venture to pontificate that there is freedom of expression wafting through Sri Lanka at present. They believe so because no journalists are being assaulted or killed at present. There is no requirement to do so now. Journalists have resorted to self censorship or have fled the shores of the island.

The path the current regime could have been stalled was only through an implosion. Many wished to believe it would be through a split within the ruling family. I did not think so. The moment has come to pass and is before us. The implosion came through political party lines. It is but true that power without accountability should be abhorred. But power sans accountability without time limits?

The Singapore or Malaysian models maybe dangled before us to counter this argument. Politicians will scream out that we are a sovereign nation and essentially a proud people. Unlike the two models have we evolved into being Sri Lankans irrespective of race? That might be a first step towards national reconciliation.

Lasantha was passionate in his chosen profession. He was committed and fearless. Not all loved him. Not all hated him. He could sense a story well before many in his profession did. He was a caring elder to children and a good leader. The journalists who worked with Lasantha were jealously guarded by him as his prized possessions even against his own management. I should know that.

Time and tide goes by swiftly. It is six years since Lasantha was murdered. Six long years without the numerous squads assigned to handle investigations into the murder making any headway. Let us pray for him. Let us pray for the perpetrators. Let us pray for our Nation on the 8th of January 2015.