The hour produced the man. The nation endorsed his credentials. The leader of choice Maithripala Sirisena, who scored a resounding victory is now President by right.

The nation has spoken loud and clear. The mandate is unmistakeable. Cleanse the past and build anew. All join in the process the Government would say. Respond positively, Tamils would urge of the TNA.

The caption of the article, is the critical question for the Tamil leadership. A response cannot be evaded after the common collective has scored a landmark victory. Tamils have made their contribution, setting aside their past disappointments. When a community, very much in a mellowed temper thrusts its tested leadership into the corridors of power, it certainly has an expectation that their trust be respected.

Can the leadership veer from the circuit of power and opt for the habitual barricade? The time is now to redeem a pledge, though unwritten it may be. The ethnic question vexing the nation for so long needs to be resolved by the TNA, with goodwill prevailing all round. It is constrained to do it, not by being with the government, but by being of it.

At a moment when right has triumphed, should weird doubts arise? Tamil leaderships have been weighed down for decades by unfortunate experiences. Distaste for power developed from independence to now, much among the Tamils, though not with the forceful and the percipient. Leaderships sensitive to mass sentiment and unresponsive to compulsive needs paid a price. Both leaders and led were badly affected for at least two generations. 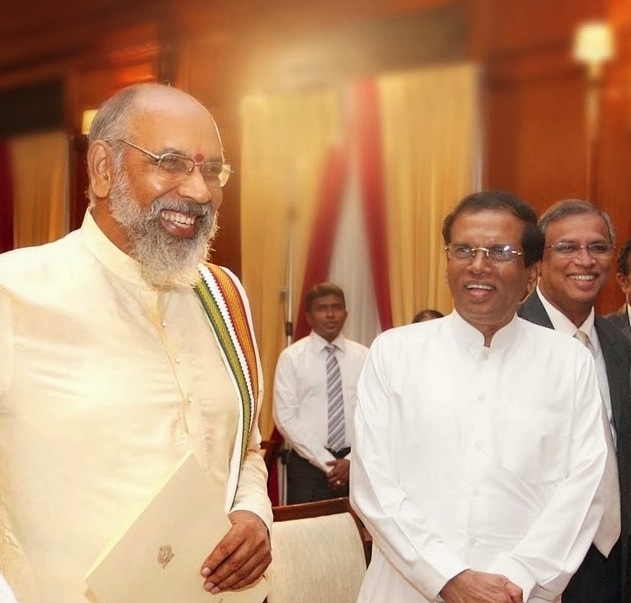 One generation lost itself in the sedate philosophy of non-violence. The other wasted away in impetuous violence. No results were yielded by either. The next has to veer from both and the onus is on the leadership. Strategy and tactic, with diplomacy for kinetics and TNA as the vehicle, have now set out on this arduous journey. The first mile is covered in the last five years. Destination is a generation away. Impatience is not a sorter of matters. By being in a hurry neither the young nor the mature can do much.

If we take Donoughmore times as a watershed, over eight decades were wastefully spent. A congenital frailty with us Tamils, made for continued failure. ‘Accept no solution unless it encompassed all issues and was perfect on paper with the last comma in place’. With such a mindset, never can we get out of our misfortune.

Thondaman and his Strategies

In 1998, as Thondaman and I approached the former Senate Building for a meeting with Lakshman Kadirgamar, Thondaman pointed to the steps and said “It was here that we had our prolonged sathyagraha against the Citizenship Laws”. Besides a display of protest, it was fruitless as we all know.

In 1960, he walked into the 151 member legislature as an appointed MP. It was the first step in moving towards the power centre, after deprivation of rights. In 1978, he entered the very citadel of power as a Cabinet Minister and continued to be there for 21 years with a brief interregnum of 3 months. Even with disappointments he persisted till he succeeded. ‘Accept what is given, not failing to pursue the rest’ was his golden stance at all times.

Ho Chi Minh’s pragmatism at the Geneva Conference in 1954, was to accept though under duress, North Vietnam and then to capture South Vietnam in 1975. They both compose a single Vietnam and an integral economy.

Tamils kept themselves away from warmth and went into winter cold from 1956. They opted for some stepped down power for 3 years in 1965, which failed to light even a single bulb. All bulbs or no bulb was the prescription for our own darkness.

Trade Union strength ensured ascendancy among his people and Cabinet membership conferred power and a status to be heard. More importantly he got a ringside view of the twists and turns of the governmental machine. His voice had greater receptivity in Colombo not to mention Delhi. These are the ways democracy works. In addition, he sharpened his nuances and honed his skills as to which button to press and when.

At a felicitation dinner for Thondaman JR spoke; “I am asked why I gave citizenship to Indian Tamils. Irestored them their rights because I want their votes” he said. What does it convey? In political calculations one is worth nothing unless one is a voter and a voter is never noted unless he has voted. This truism, a fundamental in politics is yet not known to some Tamils who continue to talk about the merit of not voting. How asinine some can be even after eight decades of tragic failure!

Thondaman told me several times, his contribution to his community would be deemed as nil had he not restored his people their citizenship and their vote. Sampanthan too has led the Tamils most adroitly. As great is the leadership which is acting in concert with foresight and circumspection. Having come to this stage and if Tamils try to be wise by disfranchising themselves (not voting) now and hereafter, it will be unpardonable. Infinitely worse is to shy away from power with modesty misplaced.

In the charmed circle, it is the insider who commands most attention. Better still when he has linguistic ability. Being best with forensic skill and trilingual capability. These are assets to couch substance in. Most important is the substance itself gathered over the years and mellowed by experience. Above all is acceptability by the powers that be.

Mr. Sampanthan meets the bill for the occasion. With over three decades in the legislature, sponsoring and spearheading the cause of the Tamils, he made himself a patriarch of the community. Of late he has become one so for all communities. If he enters the inner circle of governance, he will do so as an ‘Elder Statesman’ pressed into service for the nation’s good. From his contribution to people’s solidarity, the fall out is sure to benefit the minorities immensely. A strong buttress with breadth of vision is already in place to share responsibility with him, map out a course and to move forward.

A set of adverse antecedents from Sir P Arunachalam’s loss of trust in the twenties to Donoughmore experience in the thirties and failure at redemption by Soulbury in the forties, bedeviled the Tamils. They composed the baggage, that was deposited with independence. It required the boldness of a Suntharalingam to be in the first cabinet with Sittambalam. GG Ponnambalam’s entanglement in fishery pursuits and the way Tamil parliamentary vote was used to disfranchise the Indian Tamils, was a tragic commentary of our times. It taught us all Tamils the dangers of collaboration, insincere and self-centred.

From that date to this, with the exception of M Thiruchelvam, every Tamil who cooperated with the government worked against the community. They were all ‘used’ for narrow sectarian purposes and never for National Consolidation. The noxious title of TRAITOR stuck and stuck appropriately. Successive governments considered or offered only inconsequential Ministries to Tamils.

If there is no trust in any Tamil, it should be said so. Then they would take a course most viable for their future.

If there was trust why was a portfolio like: Education, Health, Public Administration, Irrigation or agriculture never offered?

Why was developed irrigable land not given to Tamils, particularly in multi billion rupee Mahaweli?

Since the war, even owned land in North East, is nibbled by day and swallowed at night.

Why no public sector industries in North East after early fifties?

Why should state sector employment of 1.2 million be kept at a negligible fraction of legitimate expectation?

These and infinitely more acts of marginalistion are crying to be rectified. For affirmative action;

Cannot Sampanthan or Sumanthiran handle an important Ministry with distinction? It is this reluctance for consideration of parity in delivering according to expectations, that makes the stream of Tamils keep away from joining the mainstream.

The people – A stormy week in January 2015, has brought forth a cataclysmic change for the good, on the 8th. The people whose rights were denied and freedoms suppressed, now have hopes of a fresh beginning. Tamils whose fate it had been to face pogroms and wade through blood have contributed decisively to supplant a regime of tyranny. The Muslims on whom the evil eye of mis-governance had fallen, created a new turf to fight their battle from. Sinhalese who suffered oppression for long have used their strength in numbers with deadliest effect.

Moment of Triumph and Opportunity

Parties, the political expression of aspirations, awoke to their ‘do or die’ obligations. Through an act of rare unity, they moved together, acted in concert and have accomplished the imponderable. Turbulence is now past and a smooth flight is looked forward to. Hopes are sky high.

Triumph in 2015, is most striking since independence. Society is pulled back from the verge of doom. The nation has had opportunities with every sweeping victory. 1956, 1970, 1977, 1994 and 2009. Each one of them was swept aside. Now is a chance to build anew. It will take half a century for those aggrieved, alienated, marginalized and forced into foreign climes to say with the poet “This is my own, my native land”.

Breaking the kumbam or celebrating kumbabishekam, to use Mr. Gunadheera’s words, lies with the leadership. Let those who triumphed, be worthy of the mission.